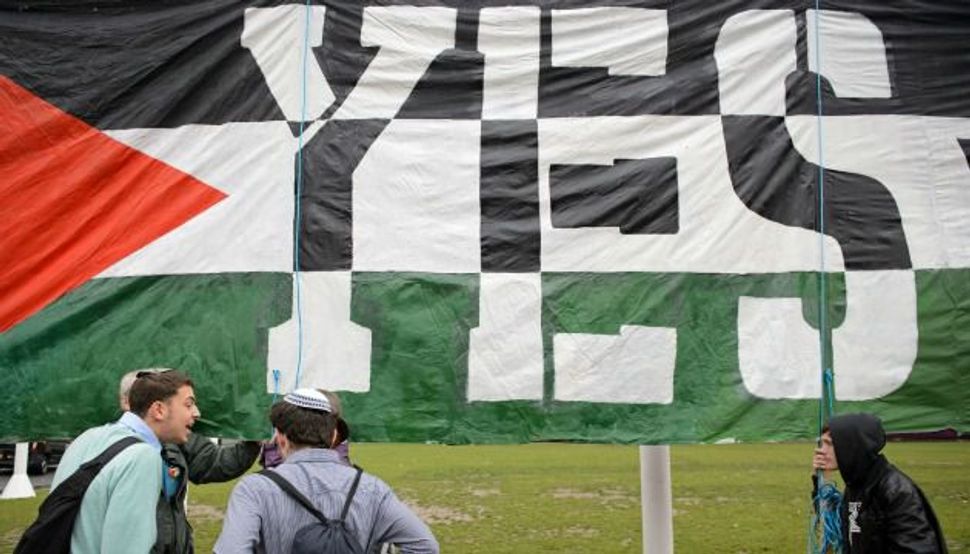 The prospect of a U.N. Security Council vote on parameters and a timeline for Israel-Palestinian negotiations, coming as it does in the lead-up to Israeli elections, is eliciting this tricky argument: “We can’t pressure Israel when Israelis are going to the polls, because it will only help the Right.”

That argument fits neatly into the list of memes that time and time again have been used to justify U.S. inaction in the Israeli-Palestinian arena. Memes like: “We can’t press for peace with the region in upheaval.” “We can’t ask any Israeli prime minister to take action that could destabilize his government.” “This is a losing issue that will cost any president and his party dearly.”

These memes have the quality of “truthiness,” making intuitive sense to Americans who are sick of Middle East wars and foreign interventions. But truthiness is not the same as truth.

In truth: Yes, the region is in turmoil, but a negotiated solution to the Israeli-Palestinian conflict could be a security boon to Israel, and could have significant positive effects further afield.

No, deferring to the preferences of Israeli leaders, or the expediency of domestic U.S. politics, rather than U.S. national security interests, is not a responsible way to make policy.

And yes, action at the U.N. on Israel-Palestine might be exploited by Benjamin Netanyahu, Naftali Bennett and their ilk at the polls, but freezing action at the U.N. on Israel-Palestine would unquestionably strengthen the Israeli Right and its poisonous pro-settlement, pro-Greater Israel agenda. It would signal to Israeli voters that they can keep their heads in the sand when it comes to their governments’ policies vis-à-vis the Palestinians, both when they go to the polls and in their daily lives. Win or lose, it would signal to politicians on the Israeli right that they can ignore the world and get away with it, in terms of anti-peace, anti-democratic policies in the West Bank, Gaza and East Jerusalem, and even inside Israel. And win or lose, it would signal to those in the timid, mainstream Left — who have for years failed to stand up to the settler movement — that there is no problem having a “Left” that prefers to avoid “unpopular,” controversial topics like settlements, human rights, or the occupation, or that sits in coalitions with right-wing parties that promote the Greater Israel agenda.

America’s policy on Israel-Palestine ought to be principled, rather than influenced by the electoral cycle in a country that has been going to the polls for general elections on average every 2.8 years since 1990. For those who insist on viewing U.S. actions as linked to Israeli elections, consider this: a U.N. Security Council two-state vote in the months leading up to national elections with historic importance and implications would focus the Israeli electorate on Israel’s key existential challenge. Indeed, as Israeli analysts Shimon Stein and Shlomo Brom recently wrote, “…a U.S. refusal to veto a resolution formulated through dialogue between the United States and the European nations could have a positive effect on the Israeli election campaign…”

As true friends of Israel, President Obama and Secretary Kerry — and Israel’s other friends on the U.N. Security Council — must recognize that they would be doing Israelis no favor by holding U.N. action hostage to Israeli elections. The last thing Israelis need today is enablers of their leaders’ suicidal tendencies. What Israelis need is a dose of reality — like the action being contemplated at the U.N. Actions that focus them clearly on the fact that even their closest allies are no longer willing to stand by passively as pro-settlement, pro-Greater Israel politicians unabashedly pursue their ideologically-motivated agenda, with active and tacit support from the Israeli mainstream.

This is what should be on the minds of Israelis as they go to the polls — rather than a misguided, even if well-intended, assurance that no matter how badly their leaders behave, the U.S. will protect them from any consequences.