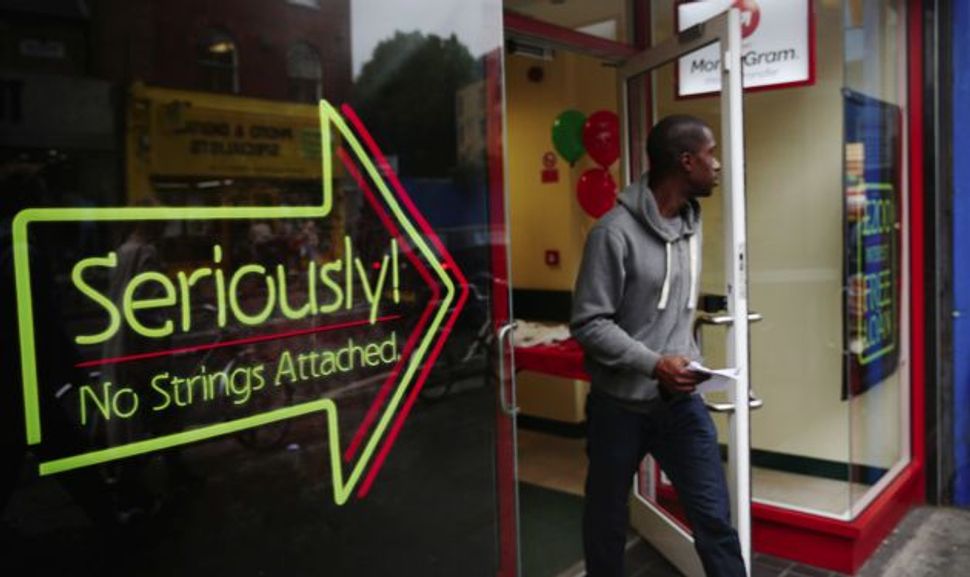 Cornered: Activists are trying to put a cap on interest rates for pay day loans. Image by Getty Image

The beginning of 2015 is also the halfway point in the year of shmitta, the once in seven years when the Bible commands that land be left fallow — a tradition that is followed today in a number of symbolic ways.

One of the powerful practices of the shmitta year is society coming together to erase oppressive debt, in a practice called shmittat kessafim — the release of money.

In biblical times, those trapped in debt would eventually wind up in chains as slaves. A year of release from debt stops that cycle. Today, 12 million Americans are trapped each year in a cycle of payday loans. These are small loans marketed as a quick, easy way to tide borrowers over until the next payday. However, the typical payday loan borrower is indebted for more than half the year with an average of nine payday loan transactions at annual interest rates of more than 400%.

Could you afford a loan at 400% interest? Do you think seniors living on a fixed income could? They can’t. Which is exactly why payday loans are marketed so heavily to them and other vulnerable communities — so that they have to take out more and more payday loans to cover the original loan, squeezing dollars out of America’s poor for years and years.

Just a few weeks ago I joined a coalition of 80 faith leaders from 22 states in Washington, D.C., for three days of study and action to close the payday debt trap. The coalition, brought together by the Center for Responsible Lending was part of a nationwide campaign happening right now. What we called for then and hope to see in 2015 is for Congress to create a national interest rate cap for payday loans at 36%. We also called on the Consumer Financial Protection Bureau, the government watchdog that looks out for customers of banks and lenders, to issue a strong new rule that would require payday lenders to do what other, responsible businesses do already: extend loans that borrowers can repay fairly while meeting their other expenses.

Ari Hart is a founder of Uri L’Tzedek: Orthodox Social Justice and a rabbi at the Hebrew Institute of Riverdale.