Did Barack Obama Snatch Victory From Jaws of Victory in U.N. ‘Palestine’ Vote? 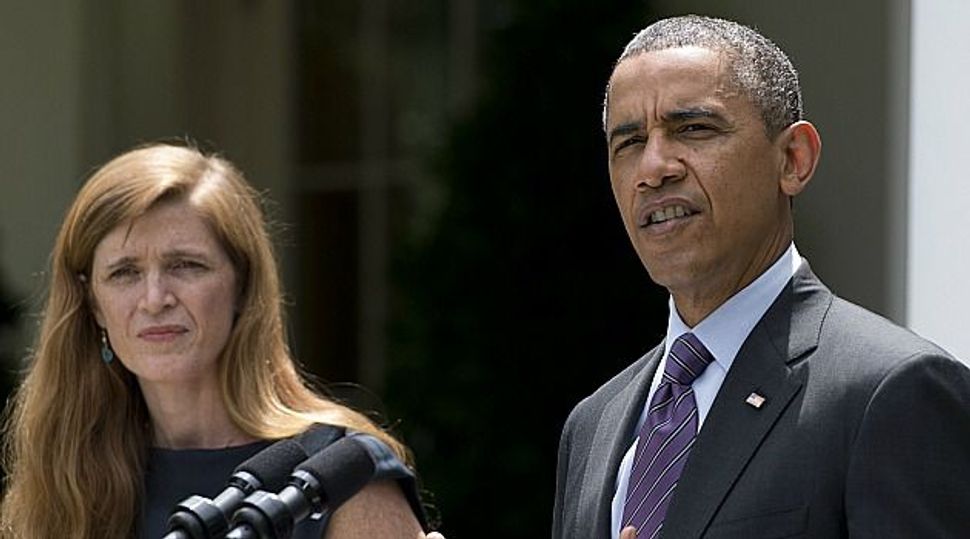 Shrewd Move: Did Samantha Power, the U.S. ambassador to the United Nations, pull the wool over Israel’s eyes by leading the effort to defeat the Palestinians at the Security Council, while emphasizing commitment to a two-state solution based on the 1967 borders Image by getty images

(Haaretz) — American Jewish organizations utilized a rare opportunity to lavish praise on Tuesday night on the Obama administration, in general, and on John Kerry and Samantha Power, in particular, for their “leadership” in thwarting the Palestinian proposal to the United Nations Security Council. Malcolm Hoenlein of the Conference of Presidents extolled Kerry’s “tireless diplomacy” while the Anti-Defamation League’s Abe Foxman praised Power for pointing out “the serious defects in the one-sided substance of the resolution.” The Israeli government, of course, will soon follow suit.

Which only goes to show that everything is relative, times change and yesterday’s outrageous position can turn into today’s negligible banality. Because Power, in her powerful statement, also made a point of reiterating Barack Obama’s statement of May 19, 2011 that the two-state solution between Israel and the Palestinians will be based on “the 1967 lines with mutually agreed swaps.” It was this formula that led Benjamin Netanyahu to publicly scold Obama at their meeting at the White House the next day, an unprecedented incident that has cast a long shadow over relations between the two leaders to this day.

Power included Obama’s formulation in order to make clear to the Palestinians that an understanding with Washington over a Security Council resolution was within their reach. But the harshness of her attack on their proposal, which she described as “unconstructive, irresponsible and risked a downward spiral” wasn’t meant exclusively or even mainly for Mahmoud Abbas in Ramallah, but for Francois Holland in Paris: it’s not clear which of the two leaders angered the Americans more.

Sources close to the international contacts of the past few days say that Kerry’s efforts were aimed not only at derailing a Palestinian proposal that significantly strayed from American parameters, but also at blocking a French diplomatic move that threatened to undermine the American prominence in Israeli-Palestinian peace talks. Paris’ decision to back the Palestinian proposal – despite the fact that these included deviations from France’s own formulations – together with Hollande’s ongoing efforts to convene an international peace conference, were seen in Washington as a French “putsch” aimed at filling the vacuum left by the American withdrawal from the peace process. Despite the setbacks and insults that have been hurled at him, Kerry has lost none of his ambition to move the peace process forward when the appropriate time comes: his aim in recent days was to push the French off center state and back to the sidelines where, in Washington’s view, it belongs.

Kerry’s objective was to make sure that notwithstanding the decision of France and Luxembourg to vote in favor of the Palestinian proposal, it would fail to achieve the necessary majority of nine of 15 Security Council members, enabling the U.S. to cast a ‘no’ vote without exercising its veto. Throughout Tuesday, the Palestinians were convinced that they had achieved the necessary majority and were apparently taken by surprise by Nigeria’s last minute decision to abstain rather than vote in favor. Both Kerry and Netanyahu convinced Nigeria’s Evangelical President Goodluck Jonathan to abstain, a decision for which he may be criticized in the next few days by representatives of his country’s large Muslim minority.

Some analysts speculated that Abbas was not surprised at all and that his defeat was intentional, which is why the Palestinians did not wait for the January 1 changing of the guard among Security Council members that could have ensured their majority: in place of South Korea and Rwanda who abstained and Australia who joined the U.S, in casting a no vote, the Palestinian proposal would have been supported by new members Angola and Malaysia as well as New Zealand, which would have abstained, at most. The other explanation for the Palestinian haste is Abbas’ wish to put the Security Council vote behind him in advance of Friday’s Fatah commemoration of its first (failed) attack on Israel’s National Water Carrier, half a century ago.

One way or another, Palestinian diplomacy was handed a stinging blow, if not outright humiliation: despite the overwhelming international support for their cause, the UN Security Council, in effect, rejected their request for statehood. The Palestinian haste was probably connected to internal Hamas pressures, though outside observers may ascribe it to their perceived preference for victimhood over pragmatism. Abba Eban’s oft-used cliché about the Palestinian propensity to miss opportunities certainly comes to mind.

But it was a lost opportunity for Netanyahu as well, at least in the political sense: if a Palestinian majority at the Security Council had been found, and certainly if Abbas had been able to reach an accommodation with Kerry, it would have been Netanyahu who could have exploited the Israeli sense of “the whole world is against us” victimhood as well as blasting the Obama administration, a favorite pastime of Israel’s right wing flank. But Netanyahu will now join Jewish leaders in singing Kerry’s praises while obscuring Power’s clear-cut message, which was meant for Israel as well: don’t think that our efforts at the United Nations have brought us any closer. We still adhere to the solution that you are describing as an existential threat in your election campaign. We’ll get back to you, however, when you get around to setting up a new government.

Did Barack Obama Snatch Victory From Jaws of Victory in U.N. ‘Palestine’ Vote?