Introducing: Who Sets the Table? 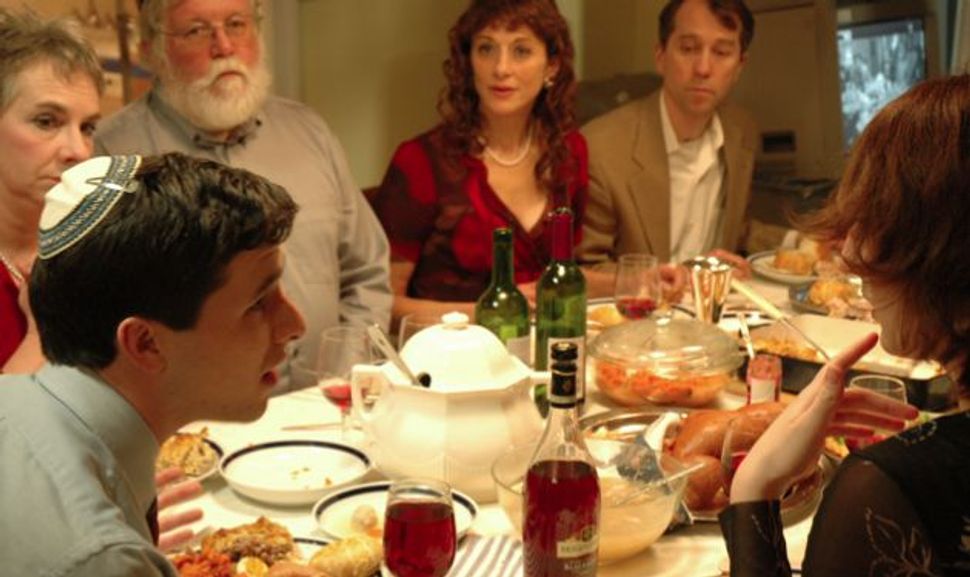 Shabbat Dinner: Do you women play a bigger role in making the holidays happen? Image by Alistair Maclean

For the past six years, the Forward has published a salary survey, a look into who earns what at America’s biggest Jewish not-for-profit organizations. What we’ve discovered is not, unfortunately, surprising. Women routinely earn less than men and occupy far few leadership positions.

The point of the salary survey is to focus attention on the gap between men and women in our workplaces. Now we’re going to take a look at our homes, too.

In 2015 the Forward will launch Who Sets the Table?, a series of four polls designed to investigate to what degree the domestic observance of Judaism continues to be the domain of one gender. Who makes sure there is challah on the table come Friday night? Who prepares the Seder? Chops enough walnuts and apples to make haroset for 15? Prepares the break-fast meal before sundown? Buys the Hanukkah presents?

Considering Jewish culture has long been one largely built around home-based rituals, the answer to these questions won’t just tell us who makes dinner, but also whose work is behind the Jewish experience for many, if not most, Jews. So this is much bigger than brisket.

Over the course of the year, we will be asking our readers to share with us who is in charge of what in the execution of Jewish life in their homes. We will ask about the Sabbath, Passover and the High Holidays, and conclude with Hanukkah. Alongside the poll will run a series of essays and reader stories that will look at these matters from a more intimate and nuanced perspective than the poll will allow.

Because Judaism is a tradition, and part of the beauty of tradition lies in the replication of the past, many of us have affection for, if not a deep attachment to, the idea of women in the kitchen frying the latkes — women included. We want to explore this inevitable tension between tradition and gender equality by looking at how it plays out in our lives.

Even as the number of women in the workforce has risen over the past four decades, we still take on more domestic responsibilities. The most recent research shows that women do twice the housework and child care than men, even when they work full time. In 1989, feminist sociologist Arlie Hochschild famously dubbed this “the second shift,” and women continue to be exhausted by it. Whether they are the ones to food shop for Friday night dinner or just the ones to remind their husbands to do so, the understanding in most households continues to be that the wife must play command central for all matters domestic.

And yet, there’s hope. Men are changing. They spend more time with their children than their fathers did, and six in 10 fathers say they wish they could spend even more time with their families. And if New York Times trend stories can be read as an indication of social change, more and more men are cooking dinners as well. There’s little evidence of this being a widespread phenomenon, but there’s little doubt as to whether change is afoot.

A woman’s ability to succeed in the professional world is tangled up with the demands of her domestic life, a point driven home by the fact that women with children routinely earn less than those who are child-free. Yes, we still face good old-fashioned sexism, and workplaces and a government that have failed to adapt to the reality of the dual-earner families. Nevertheless, much of the gender gap is a consequence of the many decisions, small and large, that women make about work once they have kids.

We talk about opting-out and leaning-in, but few women make an active, deliberate choice to do one or the other. Instead, many attempt to figure it out as they go along, often yielding to the path of least resistance because it’s the easiest. And when trying to balance a family and a career, easy is necessary.

A recent study of 25,000 Harvard Business School graduates shows just how easy it is for women to get caught up in gendered expectations about who is in charge of domestic work, and just how much it hurt their careers. The men interviewed were more likely to have achieved positions of power and prestige, and the women interviewed were less likely to feel satisfied by what they had achieved. Keep in mind, only 11% of these women left the workforce entirely, so this isn’t a case of giving up so much as it is an example of being held back.

Most of these women began their careers thinking that their husbands would consider their work equally important. Meanwhile, over half of Gen X and baby boomer men said they thought their careers should come first. Also, half of both men and women thought the women would be the primary caregiver, but two-thirds of women ended up doing so. The point is, it still feels like second-nature, even for the most ambitious and well educated among us, for working women to see the domestic sphere as their turf.

By doing this poll, we hope both to show how far we have come in terms of relieving women of this second shift and to point out how far we have to go. And if, in the process, we manage to inspire a few good guys to leave their jobs early to prepare for a holiday or two, that’s fine, too.

Introducing: Who Sets the Table?