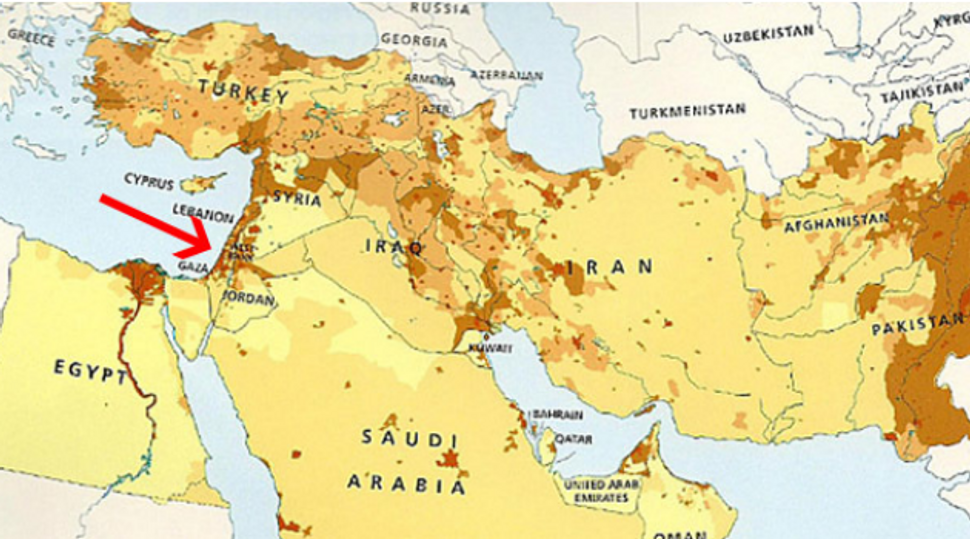 (JTA) — Before the HarperCollins Middle East atlas story is deleted from email inboxes, it pays to spend another moment ruminating on the damage caused by companies that ought to know better.

On its website, HarperCollins bills itself as “one of the world’s leading English-language publishers.” It has a storied brand and a list of top-notch authors going back some 200 years. It markets books in more than 150 countries on a wide range of subjects and boasts of having had 400 best-sellers in the past fiscal year.

Among its offerings in 2014 was the Collins Middle East Atlas, which was sold to schools in the Middle East. Atlases are usually reference works, not consulted for daily reading but good to have on the shelf when needed. This edition omitted Israel from maps in the Middle East. The West Bank and Gaza are noted, but not Israel.

Confronted with this omission, a HarperCollins spokesman said that maps marked with Israel’s location would have been “unacceptable” and the omission — clearly intentional — was a bow to “local preferences.”

Airlines for years have been guilty of the same practice. Last year, the United Arab Emirates-based Etihad Airways left Israel off its travel-route maps (all other countries in the region are noted), and does not carry Israeli passport holders. BMI, a British carrier that until 2010 flew to Tel Aviv, failed to note Israel on its in-flight maps, but did put Haifa on the map — in Arabic. At the time, BMI pleaded a “technical error” and subsequently apologized.

HarperCollins has now apologized as well, stating that it will “pulp” all remaining copies of the atlas and offering the now-standard apology for the omission “and any offense caused.”

So perfunctory! In first defending the map, HarperCollins clearly implied a business motive for its actions. The publisher assumed it could willfully rewrite history, cast aside diplomacy and appropriate a blinders-on approach to its sales in the region. Imagine if other countries engaged in territorial disputes — and there are many today, from Europe to Asia to Latin America, not to mention the Middle East — made the same demands of HarperCollins. What if the company bowed to one side or another in these conflicts? Would anyone want to use, or trust, such a geographically incorrect reference?

The international effort to delegitimize and demonize Israel comes from many quarters. Most are predictable: far-left and far-right political organizations, Islamic extremists, a host of “human rights” nongovernmental organizations, the Palestinians themselves. But when otherwise respectable parties like HarperCollins engage in willful distortions of geography or historiography, they legitimize the delegitimizers. And making matters worse, the company defended its pandering to its Arab customers and their “local preferences.”

As an educational publisher headquartered in New York, not in the Middle East, how can HarperCollins defend not providing students with facts, or in the case of the atlas, the world as it is?

The publisher of John F. Kennedy and Martin Luther King, Jr., as well as so many acclaimed works of history, sociology and even the Bible, should have known better. We will never reach conflict resolution between Israelis and Palestinians when an eraser is taken to history, diplomacy — and maps.