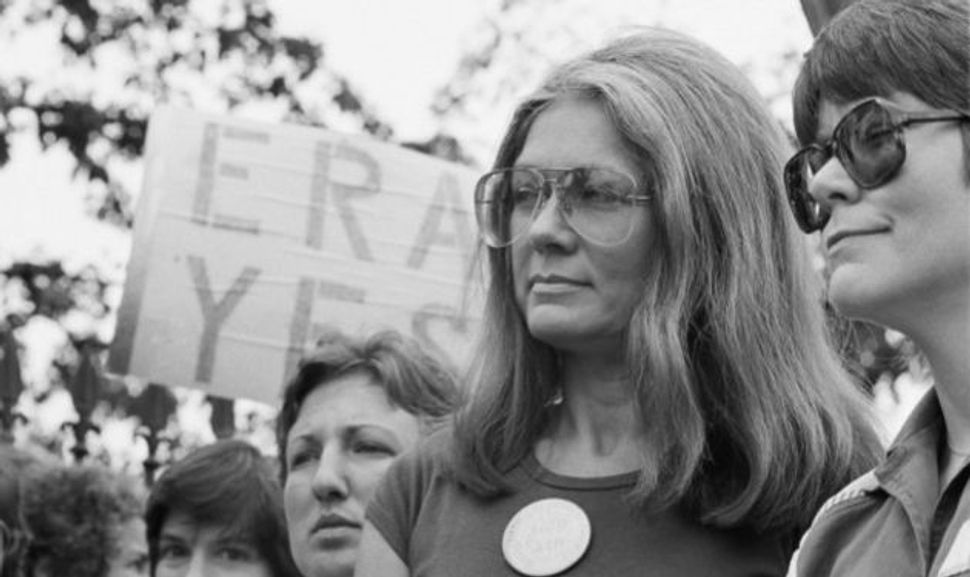 Someone To Look Up To: Feminist icons like Gloria Steinem gave girls a path forward. Image by Associated Press

There’s possibly no better evidence of the lack of female role models I had growing up than the fact that I wasn’t even aware of their absence. It took me until my late 20s to realize that all the people I admired, the ones after whom I was somewhat foolishly modeling my life were all men.

You’d be correct in guessing that I was not raised in a feminist household. There were no posters of Bella Abzug or Gloria Steinem on the wall. “Free To Be… You and Me” did not ring forth from our record player. And I don’t remember anyone asking the men to do the dishes.

This isn’t to say I wasn’t raised to be confident and strong, because I absolutely was, it just wasn’t expressed within the framework of feminism. The women in my family were a brassy bunch, loud in their opinions, deliberate in their wants. Still, there was little in the way of questioning the gendered divisions in our daily routines and habits. There was nobody telling me that I couldn’t do anything, but there were scant examples of women who did everything. Boys would be boys. Girls would be girls. There was little cause for concern.

My first great literary obsession was Victorian novels. From age 14 to 15 I devoured them all, intrigued by the feisty, plucky heroines and, yes, the romance. (How disappointed I was to discover that feisty and plucky didn’t seem to get me very far with the teenage boys of the San Fernando Valley.) My second great obsession was the Beatniks. At age 16 I was given a copy of “On the Road” from my first real boyfriend and love (finally, the Austen had paid off!), and quickly saw in it a path to salvation. At first we attempted to seek such physical and metaphysical freedom together, poking holes in the world around us and then trying to see what was on the other side. Then we broke up and I continued this Kerouac-inspired quest on my own.

Because I was not raised to think about gender, I took no notice of the fact that Kerouac was a man and that all the women that came in and out, and in and out, of his life were ultimately accessories. This ignorance was not without its benefits; my gender-blind foolishness afforded me a level of bravery that I might have not had when taking off on trips around the world alone. It also gave me the confidence to be more motivated by learning, real learning, than by perfect grades. With Kerouac’s rebellious spirit as my lodestar, I had only myself to please.

Of course, this feeling of total freedom could not last too long in a world where I was not a man. My teachers were far less tolerant of a female student who spoke with gumption than of male ones. Never mind that I was no more or less informed than they were, gumption is just not a quality appreciated in young women.

On my solo expeditions around Southeast Asia and South America that would follow when I was in my 20s, I discovered that the wide-open world that the Beatniks encountered was far more closed off to a woman. Sexual harassment wasn’t the issue so much as the fact that in places where men and women are not seen as equals, my gender often got in the way of getting to know locals. Women were often too busy with their domestic and maternal responsibilities to stop and talk, and come nighttime they all disappeared into their homes. The men were around, but afraid to be caught talking to an American woman for too long. Telling people I was Jewish certainly didn’t help either.

I went on the road to discover that my life there would never resemble Kerouac’s. It would take me half a decade and a feminist click moment before I realized to what degree that was a product of my gender.

Would I have done anything differently had I been raised by a bunch of “The Feminist Mystique” toting members of the National Organization for Women? I don’t think so. Though my expectations would have been different, and my navigational skills sharper, had I read a female version of “On the Road.” True north is different for men and women, and if I had a female-oriented compass instead of a male one, I have no doubt that, in this very gendered world of ours, I could have made it farther, physically, as well as intellectually and spiritually.

Making sure our daughters have female role models matters, and if some of them are Jewish, even better. It allows them to connect the dots between the people they are and the people they want to be. It gives them a much-needed context for their dreams, and even a suggested game-plan for making those dreams come true.

The Jewish Women’s Archive has a new online exhibit called “Power Couples” in which it has paired notable women from the past with outstanding women from today who work in the same field. There’s Nora Ephron and Lena Dunham, Dr. Ruth Westheimer and Jaclyn Friedman, and Hedy Lamarr and Mayim Bialik. Through doing so, JWA offers young women not just a chance to see what is possible, but also the opportunity to see individual achievements as part of a larger story, and one in which they could take part.

Maybe the day will come when we won’t have to view the world through this gendered lens. I hope it does. For now, we need to make sure that the stories women see and hear at least sometimes feature a few good brave, smart women. These are the ones who managed to find their way out on their roads, leaving behind a trail for the rest of us to follow.