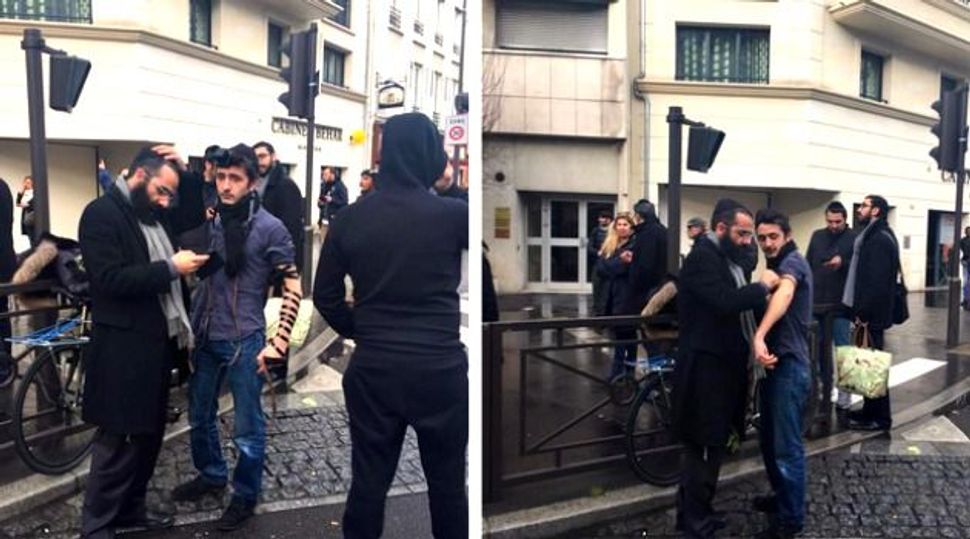 (JTA) — Standing for hours behind that yellow police line Friday, many of us could feel our patience running out as we waited idly near the Porte de Vincennes metro station for news from the hostage situation that was going on just 100 yards away, at the Hyper Cacher kosher supermarket.

The journalists among us were on the phone, setting up quality interviews for the next day about the drama we were prevented from approaching. An Islamist had taken more than 20 people hostage at a kosher supermarket, where five people died, including the assailant, before police secured the building.

The police officers preventing us from crossing were chatting among themselves, ignoring the crowd of curious passersby who paused to take pictures of the boulevard — normally a vibrant market which suddenly looked eerily empty because police had closed it to vehicular traffic.

Yet one of the people hanging around the barricade was having no downtime at all.

Holding his tefillin kit at the ready, a bearded follower of the Chabad-Lubavitch movement was soliciting Jews who passed by to put on the leathery straps and pray for the safety of the Jews who were being held hostage less than 100 yards away at the Hyper Cacher kosher store.

Michael Bloch, a reporter for the Le Journal de Dimanche, took a picture of the man in action and placed it on Twitter.

“A surrealist scene: A Lubavitcher putting on tefillin on a Jewish passerby. We are 100 meters away from the Hyper Chacher,” Bloch wrote. He did not name the man.

The picture — depicting religious devotion at the site of a crime committed in the name of another religion — drew mixed responses among Bloch’s followers.

Paul de Chabalitosse, a musician and music columnist, wrote: “Leave us alone with your religions.”

Ben Assouli replied: “You’re wrong, Paul, they’re simply showing that we are not intimidated by terrorism. That’s the message here.”

In his article for the online edition of Le Journal de Dimanche, Bloch wrote that several passersby asked the Lubavitcher whether he could tell them anything about the hostage situation. His reply: “You need to pray, that’s all I know.”