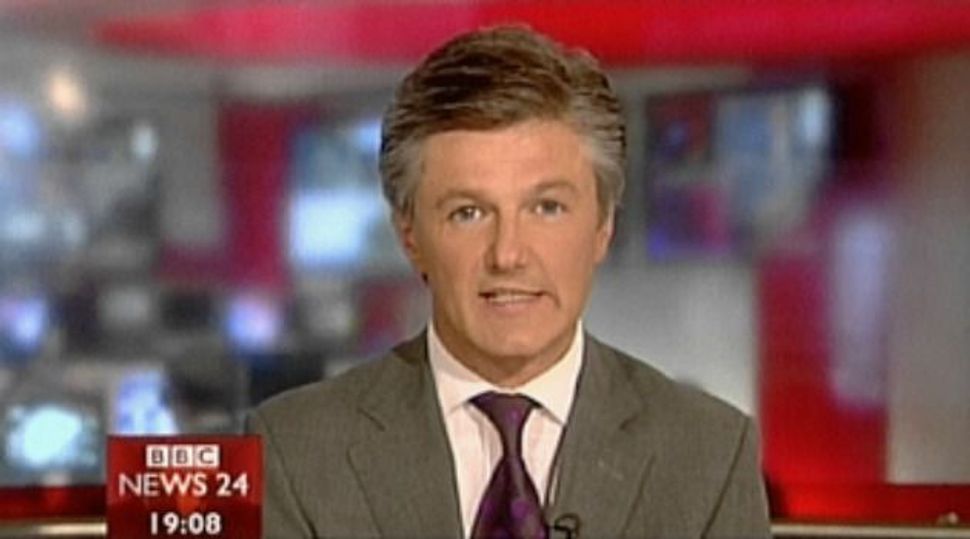 Tim Willcox’s question was heinous in and of itself. In the midst of a BBC interview with an Israeli resident of Paris and daughter of Holocaust survivors, who had been talking about Jewish suffering in Europe, the journalist ventured: “But many critics of Israel’s policy would say that the Palestinians have suffered hugely at Jewish hands as well.” This, before the bodies of the four innocents killed in the terror attacks on a kosher market in Paris had even been buried.

Why did Willcox feel the need to ask this question, to bring Israel into the discussion and at the same time invoke the canard of Jewish collective responsibility for actions of the Israeli state? Political commentators and Israeli watchdog organizations have pointed out that Willcox has a record of missteps when it comes the Jewish question. Discussing a story on the BBC News channel on Jewish donors to the Labour Party, while guests talked about “the Jewish lobby,” Willcox suggested unprompted that “a lot of these prominent Jewish faces will be very much against the mansion tax presumably as well.”

More convincingly, in a widely shared article in The Spectator, Nick Cohen deems the notion that “Jews must bear collective responsibility for Israel’s crimes real and imagined” to be “the standard opinions of the European left middle class. I meet them every day in my political neighbourhood. They are the result of ignorance rather than malice.”

Ignorance is certainly a contributing factor — people seem to have short memories (actually, no memory at all) when it comes to Jewish history — but it’s not the predominant one. What Willcox seemed to be trying to do was provide, in a crass, idiotic, and insensitive way, balance in a situation where none was required. In doing so, and in particular by mentioning Israel, he unintentionally highlighted what can be a problem with the BBC’s coverage of the Israeli-Palestinian conflict.

Apart perhaps from The Guardian — which, as a British newspaper, does have an editorial bias including on the Palestinian question — and the New York Times, the BBC is the most over-analyzed and heavily-criticized news organization when it comes to its coverage of the Israeli-Palestinian conflict. A three-minute report from Jerusalem on the News at Ten has become a kind of Rorschach test where your afflation, sympathy or allegiance can be gleaned by what you see.

Organizations in Israel like BBC Watch — an arm of CAMERA, which also operates the CiF Watch blog — seek to document instances where the BBC’s “standards of accuracy and impartiality” are not upheld, with a view to building up a case that the BBC is unfair to or ignorant about Israel. Pro-Palestinian voices, meanwhile, have long maintained that BBC is unfair to the Palestinians, that the BBC is a “defender” of Israel with “one-sided” coverage of the conflict.

Consider the reaction to this summer’s coverage of Operation Protective Edge. “Unbalanced and lacking in context” was how Sarah Colborne, director of the Palestine Solidarity Campaign, described it, arguing that the BBC “present[ed] Israel’s assault as a retaliation to Palestinian rockets rather than as an enforcement of its occupation and siege.” The Guardian’s Jonathan Freedland pointed out that criticism of the BBC was “made in exactly the same detail on the other side of the argument. Jewish Chronicle readers will denounce the BBC for failing to give the history that explains the Jewish people’s historic need to have a homeland of their own.”

If both sides hate the BBC, that’s not to say it must be doing something right — but it’s a reflection of the fact that the organization is detested not so much for having a bias as not having one. It is hated for having, as the BBC’s own guidelines state, “impartiality at the heart of public service and the core of the BBC’s commitment to its audiences.” There are worse things to be hated for. Willcox’s vulgar question, however, shows what happens when impartiality goes awry, when “ensuring the existence of a range of views is appropriately reflected” becomes “a simple matter of ‘balance’ between opposing viewpoints.”