Are 45% of Brits Really Anti-Semitic? Not So Fast. 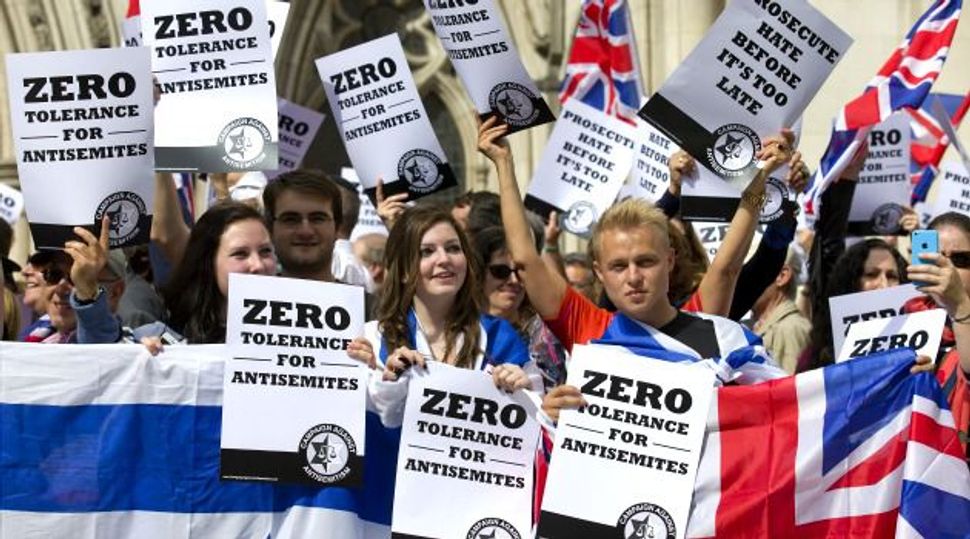 There it was on Wednesday, on the front page of The Independent. “The new anti-Semitism,” the headline read, and beneath it: “Majority of British Jews feel they have no future in the UK.”

My interest was immediately piqued, not least because the idea that a majority of British Jews are without hope bears no relation to my own experience of Jewish life in this country.

It turned out that the source of this headline statistic was a poll conducted by the Campaign Against Anti-Semitism, a pressure group which, tapping into communal discontent with established institutions, staged a very successful, cross-communal rally promoting zero-tolerance of anti-Semitism last summer in London. Their report did indeed conclude that, from a sample of 2,230 British Jews, 45% are concerned that Jews may not have a long-term future in Britain.

Not to dismiss the concerns of those respondents, but there’s good reason to question the findings of the specific section of the poll that surveyed members of the Jewish community in Britain. Mostly, that’s because of the methodology used by the CAA, which conducted the poll independently without help from a recognized polling organization:

The Campaign Against Antisemitism conducted this online survey by sending a weblink to members of the Jewish community. Several methods were used to ensure a wide and varied sample. The weblink was shared on social media sites, and was also served to users of Facebook through a targeted advertisement system. This offered the survey to users in Great Britain who identify on Facebook as having an interest in Judaism or Jewish issues.

In other words, the survey was shared with those who liked the Facebook page of the CAA or those targeted by advertising because they had previously expressed on social media some concern about Jewish issues. The sampling, therefore, is not random and encompassing of the diversity of British Jews — it’s narrow and self-selecting. The people surveyed were those highly engaged with and concerned about the issues the CAA talks about, and so more likely to agree with the statements put to them.

The survey questions were also problematic. For example: When respondents were asked whether they agreed or disagreed with the statement “I am concerned that Jews may not have a long-term future in Britain,” 45% said they agree. This has become a headline across the country, but the statement is very leading and non-committal. Whether Jews may have a future in Britain is different than asking whether they actually do. It’s not a straight question. The phrasing of the statement deliberately leaves room for more people to agree with it.

Another question focused on the phrase “Media bias against Israel fuels persecution of Jews in Britain,” as if the issue of whether or not there is a media bias against Israel is a closed matter. Yet another, “The recent rise in anti-Semitism in Britain has some echoes of the 1930s,” is loaded and unhelpful, asked only for shock value and the sheer hysteria of it. While anti-Semitism is a constant throughout Jewish history, not all forms of anti-Semitism are the same and not every wave or rise of Jew-hatred must be compared and contrasted with the most lethal of them all.

We know that there’s anti-Semitism in Britain. But as the Jewish Leadership Council and the Board of Deputies of British Jews noted Wednesday in a joint statement, “the current level and nature of anti-Semitism in Britain is not as bad as in France and other European countries, and incidents of a violent nature are much lower than they have been in previous years.” Plus, a Pew survey conducted last year found that 83% of British people have a favorable view of Jews — only 7% said they view Jews unfavourably.

With their flawed methodology and hysterical questions, the CAA’s irresponsible survey fails to give an accurate picture of Jewish life in Britain — and it undermines the real struggle to rid Britain of whatever traces of anti-Semitism do exist.

Are 45% of Brits Really Anti-Semitic? Not So Fast.