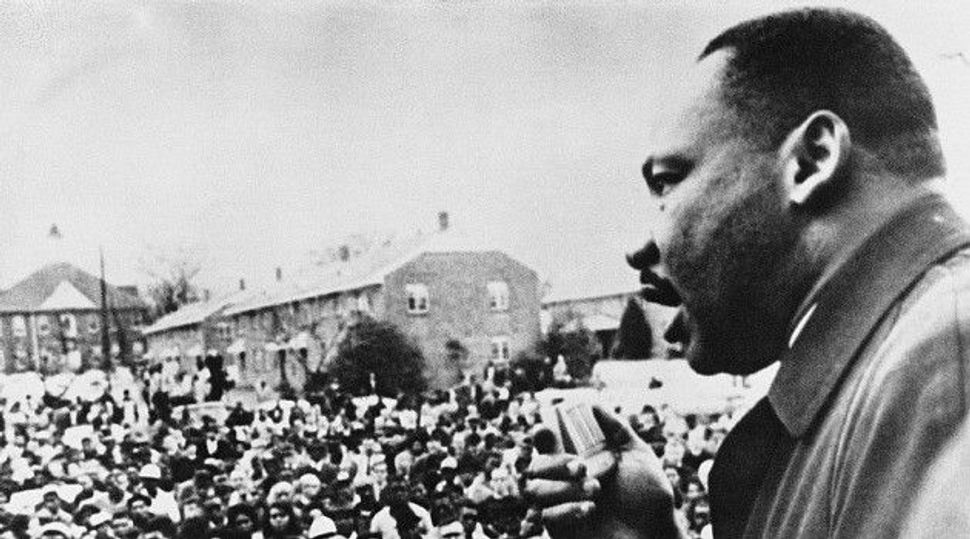 The national release of the film “Selma” during the week leading up to Martin Luther King Day, has led to a national moment of heshbon hanefesh (soul searching) over the dramatic series of events during the first three months of 1965 in which indelible images of brutal police violence against peaceful marchers convened by Dr. King created a wave of revulsion that helped to secure passage of the 1965 Voting Rights Act.

While most reviewers have praised the gritty authenticity of the film’s portrayal of the searing events in Selma and King’s strategic interaction with other movement leaders, some commentators have debated the accuracy of the film’s negative treatment of President Lyndon B. Johnson. I believe that the advent of “Selma” offers an opportunity to re-examine and hopefully, to reframe, an ongoing controversy within the Jewish community; whether Southern Jews did enough to support Dr. King and the Civil Rights movement.

As I made clear in my book “Shared Dreams: Martin Luther King, Jr. and the Jewish Community,” there can be no doubt that in vivid contrast to the national Jewish organizations, like the American Jewish Committee, Anti-Defamation League and the Union of American Hebrew Congregations, which stood staunchly in support the Civil Rights movement, many Southern Jews kept quiet or even criticized the national organizations. This point was made vividly by Dr. King himself, who took to task the leadership of the Jewish community in Montgomery, the capital city of Alabama, to which thousands of civil rights activists, including large numbers Freedom Riders, many of them Jewish, were trying to march from Selma during the tumultuous early weeks of 1965. According to Dr. King; “The national Jewish bodies have been most helpful, but the local Jewish leadership has been silent. Montgomery Jews want to bury their heads and repeat that it is not a Jewish problem, but it is a fight between the forces of justice and injustice and I want them to join in with us on the side of justice.”

Yet, there were, in fact, considerable number of Southern Jews — including rabbis and community leaders, who did choose to take a stand of conscience in support of equality for African-Americans; often at considerable risk to their careers and even to their own physical safety and that of their loved ones. As Mark I. Pinsky points out in a front page article in The Forward, during the early months of 1965 “a trio of rabbis, a public school teacher and a women’s rights activist in Montgomery all spoke out against the white supremacy gospel.”

Those brave Southern Jewish activists were not alone. Allow me to share the stories of several now largely forgotten Southern rabbis who stood up for justice in the face of racist violence. Rabbi Jacob M. Rothschild, senior rabbi of the Reform Hebrew Benevolent Association, better known then and now as The Temple, the flagship Reform synagogue in Atlanta, began speaking out against the subjugation of blacks in the South from the moment he took up his pulpit in 1946. Rothschild created a support group of Christian ministers who opposed segregation and spoke out vociferously against the refusal of Governor Orville Faubus of Arkansas to integrate the public schools of Little Rock; acts which may have led to the dynamite bombing of The Temple on October 12, 1958. The bombing gravely damaged the synagogue, although thankfully no one was injured. Five suspects, all of them with ties to the Ku Klux Klan and the National States Rights Party, were quickly arrested, but none were ultimately convicted.

Despite the bombing, Rothschild continued to take an activist role against segregation; working closely with Dr. King, who had recently joined his father, Martin Luther King Sr. at the nearby Ebenezer Baptist Church, and serving as chairman of an interracial testimonial dinner for Dr. King in 1964 after he was awarded the Nobel Peace Prize.

For all the travails he faced during those difficult years, Rothschild was fortunate to have had the strong support of his congregation. Other rabbis were not so lucky. Consider the case of Rabbi Perry E, Nussbaum of Congregation Beth Israel in Jackson, Miss, who wrote a prophetic article after the bombing of The Temple in Atlanta, entitled “It Can Happen Here”.Nussbaum went on to provide considerable support to Freedom Riders imprisoned in Mississippi jails and sponsored Clergy Institutes at Beth Israel, to which he invited local black ministers.

On September 18, 1967, Beth Israel was severely damaged by a dynamite bomb placed by Klan members. Two months later, the same group planted a bomb that blew out the front of Nussbaum’s house, while he and his wife were sleeping there. While the congregation officially supported Nussbaum during his ordeal, prominent members of Beth Israel urged him to leave and find another pulpit. The Board of Trustees subsequently voted to prohibit non-Jewish groups from using the synagogue’s premises unless they had prior approval from the board; the intent was to put an end to the interracial meetings that Nussbaum held there. Nussbaum, who was then 60 and unable to secure another position, stayed on until he retired in 1973.

There were other brave Southern rabbis like Rabbi Charles Mantinband of Hattiesburg, Miss who were ultimately forced to resign their positions by nervous Board members who felt that their rabbis’ outspoken actions for Civil Rights imperiled the larger Jewish community.

I believe that half a century after Selma, American Jewry should focus its energy less on castigating those Southern Jews who failed to speak out, and more on properly memorializing and celebrating those brave Southern rabbis and community leaders who gave voice to the Prophetic imperative in Judaism to do justice; not matter what the cost to their own well-being.

Marc Schneier is President of the Foundation for Ethnic Understanding and author of “Shared Deeams: Martin Luther King Jr. and the Jewish Community” (Jewish Lights, 1999).