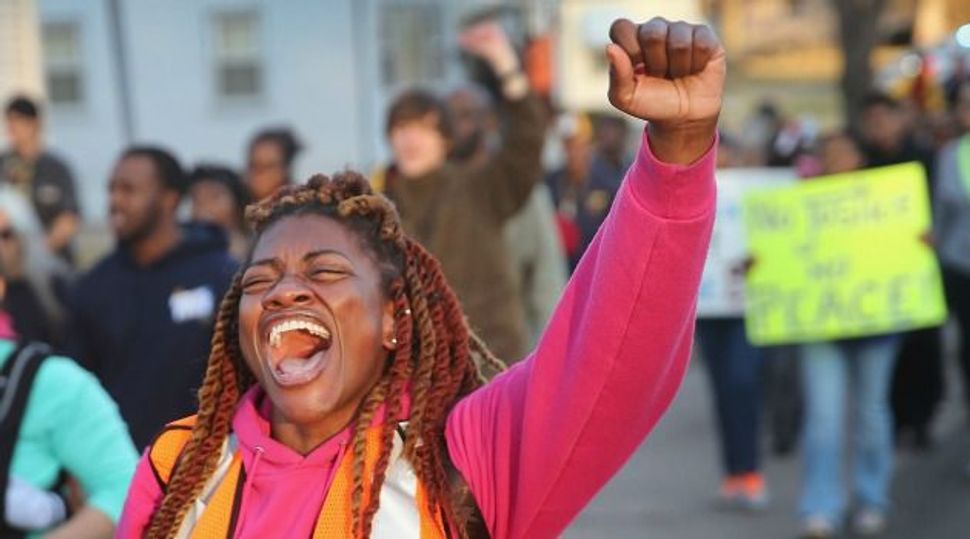 (JTA) — The latest strategy being used by those who make a career of assaulting the good name of the State of Israel is to link the issue of full equality for African-Americans, as symbolized by the word “Ferguson,” with the Israeli-Palestinian conflict.

There is, however, no rational connection between the challenge of racism in America and the situation facing the Palestinians.

In America, the history of racism has been our great sin – whether it was slavery, segregation, lynchings, institutionalized discrimination, racial profiling. The list is painfully long. Of course, we have come a long way, as represented by the commemorations of the Civil Rights Act of 1964, the Voting Rights Act of 1965 and the march on Selma.

But the deaths of Michael Brown, Eric Garner, Tamir Rice and barometers highlight that we still have a long way to travel on the road to justice in America. Getting there requires much work from all segments of society so we may live up to the ideals of equality that are at the core of this nation’s values.

Israel’s relations with the Palestinians are of a completely different character. The fundamental issues at stake are a product of a history in which two peoples had historic claims to the same land. The conflict is complicated – neither side is 100 percent right – and it begs for a solution to improve the lives of Palestinians and Israelis.

From the 1930s on, international efforts were made to satisfy each community’s desire for self-determination. The U.N. resolution of 1947, which provided for a Jewish and a Palestinian state, was accepted by the Jewish side but not by the Palestinians.

Had the Palestinians accepted partition, they could have begun to build an independent and free life for their people. Their failure to do so – and their unwillingness to do so now – is the result of a desire to destroy the Jewish state that is greater than their desire to build their own. Israelis then face the dilemma of what to do when Palestinian terrorism and rejectionism continue to threaten them.

Unfortunately, that basic reality continues to this day. Palestinians could have had a state in 2000 under Bill Clinton’s proposal at Camp David. The plan involved Israeli withdrawal from the West Bank and Gaza, and the dismantling of a large number of settlements. When Israel left Gaza in 2005, instead of building a state, Hamas turned on Israel with rockets. And when Ehud Olmert offered the Palestinians a state and Israeli withdrawal in exchange for peace and recognition, no Palestinian answer came forth.

Even today, as the Palestinians appeal to the U.N. Security Council and the International Criminal Court, the same dynamic is at work. The Palestinians would like to get a state without ending the conflict with Israel. And so the situation has not changed much. Israel continues to face the dilemma of what to do when Palestinian terrorism and rejectionism continue to threaten them.

Let’s be clear: There can be criticism of Israeli treatment of the Palestinians. But it is not a question of institutionalized racism. It is not a matter of Israel wanting to rule over the Palestinians. Israel has tried in various ways to break the deadlock: comprehensive negotiations, partial negotiations, unilateral withdrawal. None have worked.

It is neither helpful in dealing with the racial challenges facing this country nor in solving the complex Israeli-Palestinian conflict to conflate two very different issues. It is particularly unfortunate that some have sought to do so on Martin Luther King Jr. Day.

King’s message was about building bridges, bringing people together and joining forces to fight hate and oppression. Comparing American racism and Israel’s treatment of the Palestinians, by contrast, seems driven by individuals more invested in undermining the Jewish state than in furthering race relations in America or working toward a solution to the conflict in the Middle East.

Those of us interested in both improving race relations and resolving the conflict in the Middle East must stand up and reject this cynical strategy.

Kenneth Jacobson is deputy national director of the Anti-Defamation League.