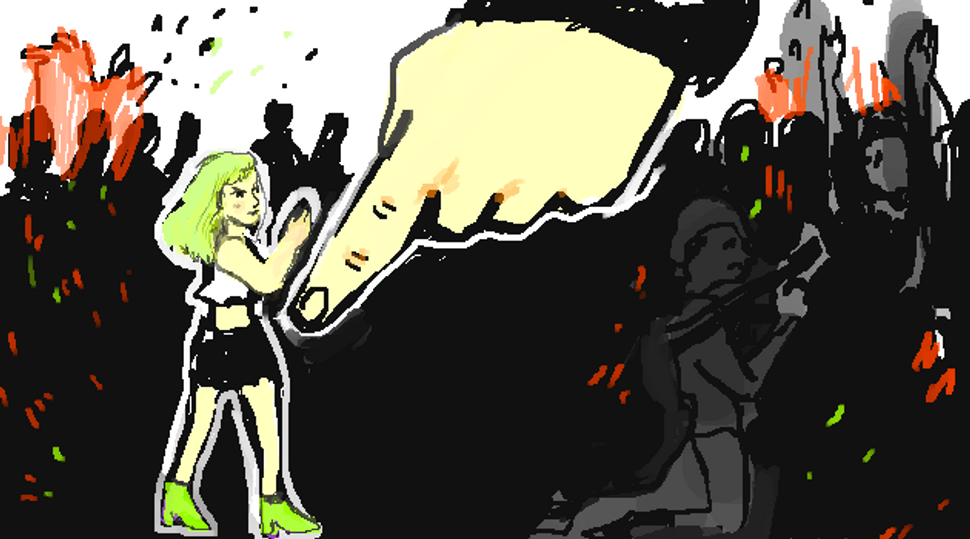 That’s a message currently winding its way through Jerusalem’s streets, thanks to a new ultra-Orthodox modesty campaign.

The ad, plastered across 20 Egged buses, has been sparking social media protests among secular Israelis who resent being told how to dress. They’re saying that it’s hypocritical of the bus company to agree to run such an ad, while often refusing to run ads by liberal groups that include photos or drawings of women.

But the Haredi advertiser claims there’s nothing for secular Israelis to be upset about. After all, the goal of the ad is “the transcendence of the soul of the Har Nof righteous” — the Orthodox Jews murdered at a Jerusalem synagogue back in November.

What do short hemlines have to do with a terror attack, you might ask? Well, here’s the advertiser’s logic:

“It’s clear that those who were murdered did not receive a punishment they deserved. They were righteous people. They woke up to pray at 6 am. They are public victims, and it happened to them because of us, because of our acts.”

In other words, terror attacks happen because Israeli women flounce around in racy dresses. Sure. Okay. Clearly.

As if it’s not infuriating enough to blame the deaths of innocents on the public’s fashion choices, the advertiser went on to claim that the campaign doesn’t distinguish between the sexes, doesn’t single out women’s clothing, and therefore doesn’t offend.

This would be laughable if it weren’t so damn sad. Does the advertiser really expect anyone to believe that “short clothing” is a reference to anything but women’s sleeve, skirt and dress lengths? How exactly are we supposed to understand it as a reference to men’s clothing? Did the Hasids’ short black pants cause deaths in Jerusalem? Are culottes the culprit of the Har Nof terror attack?

Women are so obviously being targeted in this ad, that it’s amazing Egged spokesman Ron Ratner could bring himself to defend it. But defend it he did.

“We live in a tolerant democratic society, and as long as the ads don’t harm the state, its symbols or public sentiment in an intolerable manner — we shall not intervene.”

How do you explain to such a mansplainer that these ads do harm women, and so do harm the state and public sentiment?

The advertiser, meanwhile, clarified that his message was meant specifically for the Haredi public, who are educated to believe in the value of modesty as expressed by long hemlines.

“I requested that the signs would only appear on the lines serving the public who really understands it but is trying to escape it. If we find it on the seculars’ buses, I will ask them to remove the signs.”

Still, he thinks secular Israelis who were not raised on these values stand to benefit from the ad, too. “Modesty will protect all of us — even those who are now complaining.”