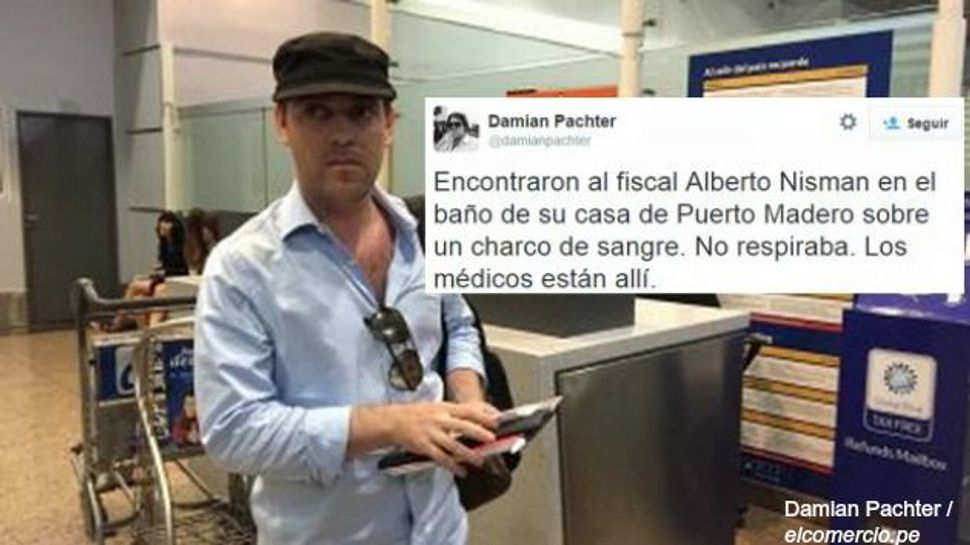 The journalist who first reported the death of Argentinian special prosecutor Alberto Nisman last Sunday has now fled the country, saying he feared for his life. This is according to reports on Israel’s Ynetnews (English) and Walla (Hebrew) news sites, based on tweets on the online Argentinian Journalists’ Forum.

The journalist, Damian Pachter of the English-language Buenos Aires Herald, reportedly tweeted that he decided to flee after noticing “suspicious surveillance” following him. According to Walla, he also “received hints” that he should leave. He said he left without even stopping at home to collect clothes or belongings after receiving warnings that there were unknown persons waiting for him at home. He left his car at the airport parking lot.

Nisman had spent the last decade investigating the still-unresolved bombing in 1994 of the AMIA center, headquarters of Argentina’s Jewish community. A previous investigation had gone around in circles for a decade and was capped by the disbarring and indictment of the previous chief investigator on charges of bribing a witness.

The bombing killed 85 people and was the worst terrorist incident in Argentine history — and the deadliest anti-Jewish attack since World War II. Israel and U.S. intelligence services believe it was planned and carried out by Iran and Hezbollah, but nobody has been brought to justice.

Nisman announced four days before his death that he had completed a 290-page report charging Argentina’s president and foreign minister, Cristina Fernandez de Kirchner and Hector Timerman, with plotting a cover-up. He said the pair had planned to dismiss charges against the senior Iranian officials suspected in the plot in return for a deal to trade Argentinian grain for Iranian oil. The Financial Times of London carried an analysis on Thursday of the economic pressures driving the suspected deal.

Late Sunday night Nisman was found dead in a pool of blood on the bathroom floor of his apartment, with a single bullet wound to the head and a .22 caliber pistol lying next to him. He had been scheduled to appear hours later before a closed session of Argentina’s Congress to discuss his allegations.

Law enforcement officials initially stated that there was no indication of outside party involvement in the death, and speculated that it looked like a suicide. That sparked an outpouring of outrage across the country. Demonstrators accused the president, Kirchner, of orchestrating Nisman’s murder in order to derail the investigation.

On Thursday Kirchner wrote on social media that she believed Nisman’s death was not a suicide. But she said his allegations against her were false, and that he had been manipulated by rogue ex-intelligence agents who had been dismissed last year. Later that day her chief of staff wrote that the rogue agents had murdered Nisman.

Initial reports of Nisman’s death indicated that he was found in his apartment with the door locked from the inside, suggesting that he had been alone at the time of his death. However, subsequent reports have painted a very different picture.

A locksmith who had been called to the apartment to gain entry through the rear service entrance told the media that although the rear door had a key lodged in the lock on the inside, he found the door was not in fact locked. Moreover, police reported that in addition to the front door, which had an electronic code, and the rear door, through which the locksmith entered, there was a narrow passageway leading to an air conditioning unit and then to a neighboring apartment, which belongs to a still-unidentified foreign citizen. Police found a footprint and fingerprint in the passageway.

The prosecutor who initially called the death a suicide, Viviana Fein, stated on Saturday that the gun had been fired from a point-blank range of less than a centimeter away from Nisman’s head. That would be consistent with suicide.

However, the Times of Israel reported that federal police sources told local media, also on Saturday, that the gun had been at least 15 centimeters (6 inches) away from his head, making suicide extremely unlikely and thus reinforcing suspicions of murder.

Nisman ended up in 2009 indicting Argentina’s president at the time of the bombing, Carlos Menem, on charges of accepting a $10 million bribe from the Iranian government to sidetrack the bombing probe. Investigators believe Menem, a son of Syrian immigrants to Argentina, was afraid a full investigation would bring out illicit dealings between himself and a Syrian businessman from his family’s home village in Syria.

But that case, like all the others connected to the case, has yet to go to trial.