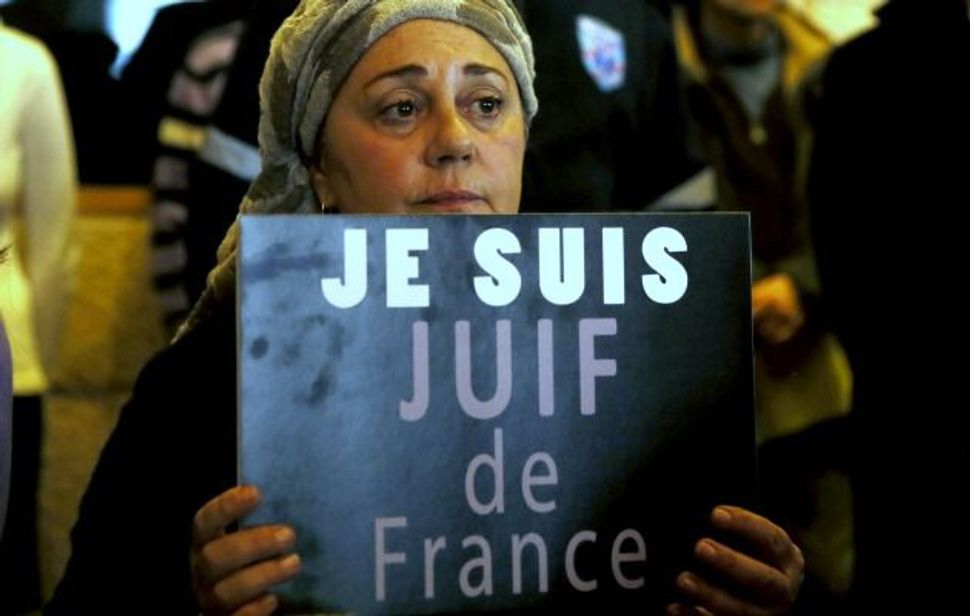 (JTA) — Three weeks ago, my wife and I were shopping in a Parisian kosher butcher store several miles west of the supermarket where four Jews were murdered on Jan. 9. The shop in our neighborhood was well patronized, with lines stretching out to the sidewalk before Shabbat.

We were staying in an apartment in Paris’ 12th district while I promoted a new book about the treatment of Jews in France during World War II. During our stay, we spoke with dozens of our Parisian friends, including some who are Jewish, about whether the year 2015 evokes for them at least some of that dark anti-Semitic history. It was a time when a French government that became known as Vichy promulgated 200 anti-Semitic laws — with little German pressure — that eventually sent some 75,000 Jews “to the East” and almost certain death in the concentration camps.

In those weeks of what we now know was the “calm before the storm,” our friends confessed to some fears about a combined resurgence of both old and new forms of anti-Semitism in France. The far-right National Front party under Marine Le Pen barely hid its old-style anti-Semitism under the ugly mask of anti-Arab xenophobia. And the party was gaining strength in the polls.

Meanwhile, individual Jews were sporadically attacked, frequently by disaffected French Muslims. In some areas of Paris, one friend said, it might be unwise to wear a yarmulke outdoors. But in their own neighborhood, in the 15th district, they said they would have no such fears and did not counsel their nephew, an observant Jew in his 20s, against wearing a kippah.

In fact, a cross-section of my Parisian friends agreed that American talk of France having become anti-Semitic was grossly exaggerated. So in polite conversations back in the States, my wife (a French teacher in Manhattan) and I had already noted what we felt were overstatements, given our own experiences and observations during frequent visits in various parts of France. We chalked up some of the feverish American talk to the persistent Francophobia that too often marks political commentary about France in the United States. The French, after all, have long been targeted for American criticism.

We tried to curb this talk of French anti-Semitism, the supposed droves who were leaving for Israel — some 7,000 French Jews in a population of approximately 500,000 made the move last year, though some have since returned for economic and other reasons — and what we knew were exaggerated American images of French Jews living in constant fear. We did this, recognizing that Europe is perennially at some risk of returning to its traditional anti-Semitism — a risk I consider more fundamental even than Muslim extremism fueled by events in the Middle East.

My attitude about France has not changed even since the latest spate of deadly violence. There is nowhere in the world that is safe. But in many ways it is as safe for Jews in Paris as it is in Tel Aviv or Brooklyn, or Budapest.

Of course the prudent increase in security, as long as it does not turn France into a police state, will be necessary for a while, as it has been periodically for the past few decades. French schoolchildren need to be protected (and, truthfully, the same could be said for American kids). The kosher butcher shop we patronized now is on high alert. This makes sense.

But we should not forget what France, the first European country to bestow full legal rights on Jews, still offers them: vibrant Jewish institutions and a government that sees their presence as integral to the French future. The French president and prime minister, along with the mayor of Paris, have been steadfast in their support of Jews on French soil.

During my recent trip, we saw a performance at a 100-seat theater of a French version of Shakespeare’s “The Merchant of Venice.” The audience, a broad cross-section of ordinary Parisians, seemed immensely sympathetic to the plight of Shylock the Jew as a representative of the persecuted European “other” through the centuries.

Attitudes toward Jews are changing for the better in France. There will be tragic eruptions to the contrary. But France is not an anti-Semitic country. It remains, as it finally comes to grips with its Vichy past, a bastion of equality and hope for its Jewish population.

Richard H. Weisberg is Floersheimer Professor of Constitutional Law at the Cardozo Law School of Yeshiva University. For his work in righting some of Vichy’s wrongs, he won the Legion of Honor in 2009. His recent book, “In Praise of Intransigence,” and his “Vichy Law and the Holocaust in France” both discuss French anti-Semitism.