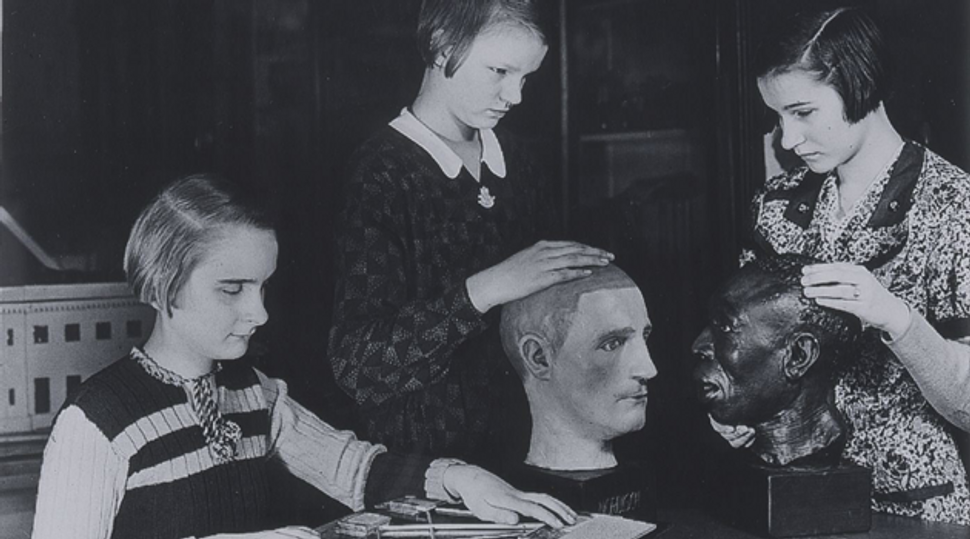 “The Ten Commandments For Choosing a Spouse,” was written by the public health committee of the Reich and published in Germany in 1935. Beginning Tuesday, International Holocaust Remembrance Day, it will be on display in Hebrew translation as part of the “Deadly Medicine: Creating the Master Race” exhibition at the Ghetto Fighters’ House (Beit Lohamei Hagetaot) Museum.

The exhibition, which originated at the U.S. Holocaust Memorial Museum in Washington, D.C., trains a spotlight on the twisted principles and methods that the Nazis tried to bequeath to the German people, as part of the regime’s efforts to maintain what was called “racial purity.”

The first of the above-mentioned commandments, which were aimed at women, was: Remember that you are a German woman, and that everything you are is thanks to your people. The document explains that while the “genetically healthy” German woman will pass from the world, everything she transfers to her offspring – whom will be plentiful, it is hoped – will remain behind, and thus “Your nation will live forever!”

The other commandments urge German women to choose their spouse carefully: that is, “only from the same Aryan blood or from Nordic blood.” Mixing races that do not suit one another often leads to racial degeneration, the document explains – and to the downfall of people and nations alike. German women were, moreover, ordered to keep their distance from members of foreign races who are not of European origin, and to keep their bodies pure because “momentary pleasure” is liable to destroy one’s health and genetic makeup forever – “a curse that will affect you, your children and your grandchildren.”

German women were told to ask their potential partner about his “ancestors.” Never marry a good man from a bad family, it is written, for no medical substance can change tainted “genetic material”; it was recommended that the potential spouse should even undergo medical tests. Additional advice on the list: “Seek a companion, not a playmate. The purpose of marriage is to bring children into the world and to raise offspring. This final purpose will be achieved only among people who are racially, physically and emotionally homogeneous … If you are hereditarily fit, you must not remain single.”

A book showing shapes of heads, at the ‘Deadly Medicine: Creating the Master Race’ exhibition. Photo by Courtesy

A woman who was unfortunately not healthy or fit to bear children, even if her family was “pure German,” was in danger of sterilization carried out by the state. To this end, in July 1933, just months after coming to power, the Nazis passed the Law for the Prevention of Offspring with Hereditary Diseases.

About 400 Germans who were diagnosed as “feeble-minded,” mentally ill or with other disabilities considered to be hereditary in nature, underwent surgical sterilization during the Nazi era, at first officially and later in secret. In order to locate candidates for sterilization the Nazis conducted dubious intelligence tests. Among their victims were many poor and uneducated people.

The “Deadly Medicine” exhibition at the Ghetto Fighters’ House Museum draws a straight line between the “euthanasia” program the Nazis initiated even before the outbreak of World War II – most of whose victims were non-Jewish Germans – and carrying out such “medical procedures” on victims from other groups: Jews, Gypsies, homosexuals and anyone who constituted an imagined threat to the health of the German nation.

Along with the above-mentioned Ten Commandments, and explanations of the test administered to the “feeble minded,” the exhibition displays additional historical documents that open a window on the sick Nazi soul. One is a receipt signed by none other than Dr. Josef Mengele, who in June 1944 approved the transfer of the decapitated head of a 12-year-old Gypsy boy as “research material.” Another document on display instructs German midwives to report to the authorities on the birth of infants with a physical or intellectual defect, without the parents knowing the offspring was doomed to “euthanasia” for that reason.

A German brochure from 1942, encouraging German women to avoid alcohol and nicotine, Photo by Courtesy “Deadly Medicine” makes its Israeli debut several months after a memorial commemorating the victims of said euthanasia campaign was dedicated in Berlin, and discussion of the German victims of the Nazis has once again begun to preoccupy people in the country. Between January 1940 and August 1941 over 70,000 people were killed, most of them non-Jewish Germans, in gas chambers camouflaged as showers in euthanasia facilities in Germany and Austria.

As part of the secret program, which was dubbed “Operation T-4,” patients classified as “incurable” or unproductive were chosen to be killed. As a result of a nationwide protest in Germany, Hitler stopped the program of killing by gas, but the euthanasia continued until the end of the war, and took the lives of a total of about 200,000 people. Their body parts were sent to scientists such as Dr. Julius Hallervorden of Berlin, who received hundreds of brains of such victims.

“Among those brains were wonderful materials, [revealing] lovely mental defects, deformities and early childhood diseases,” he said after the war, as documented in the exhibition.

A model of a Jewish head, ordered by the German regime from a Polish-Jewish sculpturer. Photo by Courtesy The main coordinator of the entire program was the Berlin pediatrician Dr. Ernst Wentzler. Although he had developed methods of treating premature infants or babies suffering from birth defects, he also supported shortening the lives of the “incurable.” In 1934 he joined the Nazi Party; between 1939 and 1945, as a senior figure in the euthanasia effort, he tested and assessed patients and ordered the murder of thousands of children.

Also on the list of the infamous doctors and scientists appearing in the show at the Ghetto Fighters’ museum is, of course, Dr. Mengele, who conducted sadistic medical experiments on the prisoners of the Auschwitz death camp, and was dubbed the “Angel of Death.” Mengele, who ended his life by drowning in the sea, did not operate in a vacuum. On display are also pictures and documents that describe the recruitment of many German scientists, including doctors, geneticists and biologists – all part of the Nazi extermination machine.

One of the pictures featured in “Deadly Medicine” documents an anthropological conference in Tubingen, Germany in September, 1937. Dr. Mengele can be seen there alongside three other figures from the world of science, who paved the way for the Final Solution of European Jews, and provided Nazi Germany with the biological “justification” for their acts of murder.

Eugenicist Otmar Freiherr von Verschuer examines twin brothers. Photo by Courtesy The first of these was his teacher and mentor, biologist and researcher of twins Otmar von Verschuer, director of the Kaiser Wilhelm Institute for Anthropology, Human Heredity and Eugenics. The second was anthropologist Eugen Fischer, who conducted a “study” on African children, and determined that they were of “an inferior racial quality.” The third was psychiatrist Alfred Ploetz, who developed theories about racial inferiority and turned the term “racial hygiene” into a common expression in Nazi Germany.

Another doctor whose despicable activity is presented in the exhibition is gynecologist Karl Klauberg, who developed treatments for barren women, but in 1943 and 1944 conducted experiments in Auschwitz in a search for a cheap and efficient method of mass sterilization. Some 700 women, most of them Jews, fell victim to Klauberg’s experiments. He injected toxins into their uterus that caused excruciating pain and sometimes death.

“The day is not far when I will be able to say that one doctor, possibly with 10 assistants, will probably be able to carry out several hundred sterilizations – if not 1,000 – per day,” he wrote to Heinrich Himmler on June 7, 1943.

The exhibition reminds visitors that the Nazis were not the first – and certainly not the only ones – to discuss racial theories. The path from the distortion of Charles Darwin’s “Origin of the Species” to the implementation of theories about “racial improvement” in the gas chambers was long, and began far from Germany already in the 19th century. Indeed, it was British scientists Francis Galton, who in 1822 coined the expression “eugenics” (“well born,” in Greek) to describe a socio-scientific philosophy for improving race. According to eugenics, efforts must be made to encourage the distribution of positive hereditary characteristics, and to prevent the multiplication of people with defects and disabilities.

People who adopted this philosophy could be found in Europe, the United States, South America and Palestine. Laws that allowed forced sterilization were passed even in the United States, which more than anything else has traditionally identified with the values of liberalism. This is what Supreme Court Justice Oliver Wendell Holmes wrote in 1927, in a discussion about Carrie Buck, a woman who was forcibly sterilized after she was found to suffer from a mental defect:

“We have seen more than once that the public welfare may call upon the best citizens for their lives. It would be strange if it could not call upon those who already sap the strength of the State for these lesser sacrifices, often not felt to be such by those concerned, in order to prevent our being swamped with incompetence… The principle that sustains compulsory vaccination is broad enough to cover cutting the fallopian tubes. Three generations of imbeciles are enough.”

Six years later the Nazis came to power and used some of these principles as a scientific justification for a murderous policy of tremendous scope.

A transparent model of a human being, the Gläserner Mensch, shown at the German Hygiene Museum. Photo by Courtesy