How Ultra-Orthodoxy Is Most Feminist Faith 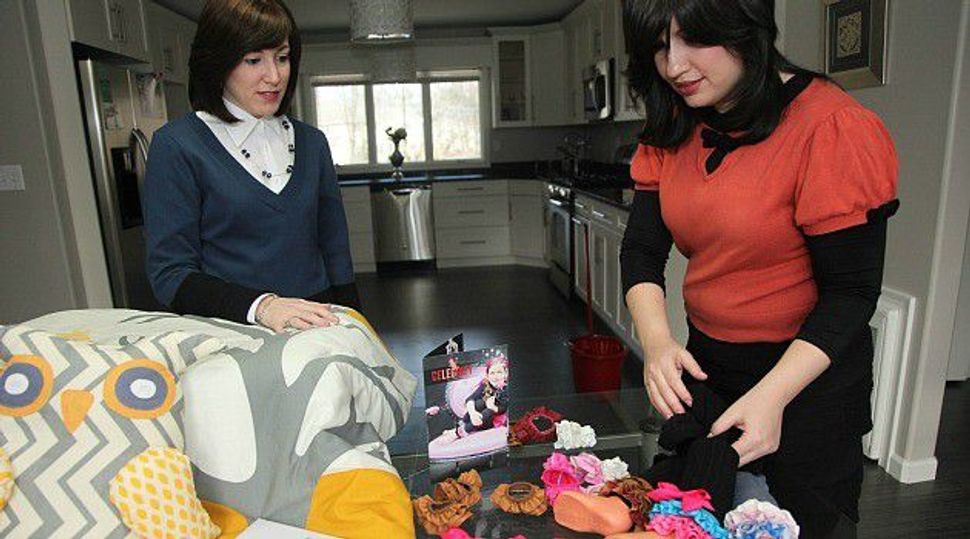 Marketing Meyvintes: Rosie Kraus (right) and Chavy, who would allow use of only her first name, launched their careers as entrepreneurs after watching episodes of the reality TV show ‘Shark Tank’ on YouTube. Image by Shulamit Seidler-Feller

Cris de coeur over the economic state of Israel’s Haredim are commonplace these days. Understandably so; the community is in dire financial straits.

Some of the alarm may be motivated by concern for members of the Haredi community; much of it is clearly born of disquiet over what Haredi poverty and unemployment rates seem to bode for larger Israeli society. But between the lines of many treatments of the topic – actually right on the lines, in some cases – are expressions of disapproval of Haredim themselves.

The Haredi dedication to Torah-study (and concomitant shunning of military service) is disparaged, or at least viewed with condescension. The size of Haredi families is regarded with looking-down-the-nose disapproval. And, of course, the seemingly self-imposed poverty of so many Haredi families along with the low employment rate of Haredi men are beheld with deep displeasure, if not disdain.

Haredim do indeed consider Torah study to be vital to their lives, and to the Jewish people. They sincerely and strongly believe that it constitutes a powerful spiritual merit for the protection of Klal Yisrael.

Family size is, of course, the choice of parents. Haredim, like most Jews, consider children to be a blessing. Unlike many, though, they consider such blessings to be cumulative.

The Haredi poverty rate, according to a recent Taub Center for Social Policy Research study, is at 66%, the result, the study concludes, of “a lack of increase in employment, low earnings, and the government cutback in child allotments.” Those child allotments, an integral part of Israel’s social assistance system, have been slashed repeatedly in recent years. Although disproportionately affected, Haredim, rather than rise up and rebel, have simply lowered their living standards accordingly, leaving more of them now beneath the poverty line.

The low employment rate of Haredi men is undeniable. According to Israel’s Central Bureau of Statistics, a mere 56% of Haredi men between the ages of 25-64 are working, as opposed to 90% of non-Haredi males.

What’s curious, though, is the scant mention of employment figures for Haredi women. In 2010 55% of Haredi women were working; in 2013, that figure rose to 70%, the result of personal initiative and groups like Temech.

An Israeli non-profit, it actively seeks to assist Haredi women seeking to enter a variety of professions, developing and administering programs in “professional development, soft-skills acquisition and networking,” and works with both government and industry to tailor existing training and placement programs to the specific needs of Haredi women. It has trained thousands of women who now work in a variety of industries, in positions low and high.

Then there’s Matrix Global, an offshoot of Israel’s leading IT company, which has also trained and placed some 900 programmers and code checkers for companies like NICE Systems, Kenshoo, Teva and eBay.

The curiousness is intensified by the fact that one of the time-honored, if tired and more than a bit prejudiced, criticisms of the Haredi community is that its womenfolk are oppressed.

Women’s empowerment in the United States has traditionally been linked to economic opportunities, to women becoming wage-earners. Back in 1950s America, most women were homemakers, dependent on their husbands to bring home the babka, so to speak. Part of what was celebrated as “women’s liberation” entailed the increase in women earners, where the distaff partner in a marriage was not economically dependent on the stubbled one.

In other words, precisely what we’re increasingly seeing in Israel’s Haredi community. The image of demeaned Haredi women is a canard, as anyone who has made a serious effort to study the community well knows. There are, to be sure, clear roles for the sexes in traditional Jewish life. Men study Torah and are expected to attend services (and be caring husbands); women best express their femininity as mothers and caregivers (and caring wives). But the average Haredi husband loves and values his wife. And, increasingly, it seems, is dependent on her income.

That does not bother Haredim. Quite the contrary, “Eishes Chayil,” or “Woman of Valor,” the verses from Proverbs 31 traditionally sung at the start of the Sabbath evening meal, describes what one might well call a determined businesswoman. Not only does she “open her hands to the poor and reach out her hands to the needy,” but “considers a field and purchases it, and plants a vineyard with the fruit of her labors,” and “makes and sells linens, supplies the merchants with sashes.”

Even if the average non-Haredi may find it puzzling, a community that embraces such women, proud Jews who want their husbands to study Torah full-time and are prepared to juggle families and professions to do so, is no less worthy of praise.

How Ultra-Orthodoxy Is Most Feminist Faith