When ‘Let My People Go’ Tugged at World’s Heart 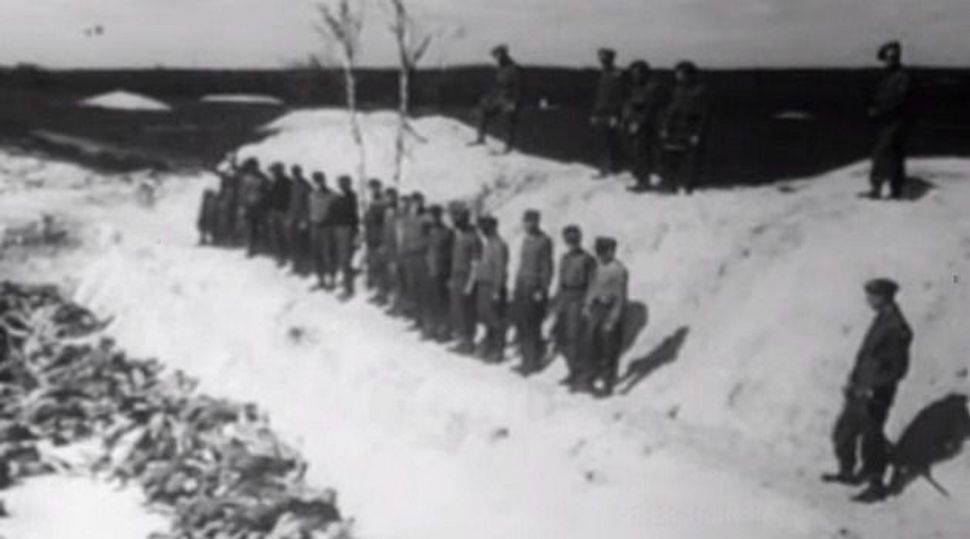 It’s not necessarily how you want to launch your new teaching career, but hey, stuff happens. Facing my first class, I stood by the desk, looked at the students and wept.

The course, “Israel and Its Neighbors,” focuses on political and military aspects of the Middle East conflict. I had decided to start things off by screening a 1965 television documentary, the Oscar-nominated “Let My People Go: The Story of Israel.” I’d remembered it from childhood as a powerful presentation of the classic Holocaust-and-redemption narrative. I wanted to show how dramatically Israel’s story and image have changed in a half-century. What I’d forgotten is how utterly our depiction of the Holocaust has changed in that time. How it used to punch you in the gut.

One-fourth or more of the hour-long film is raw footage of the Nazi horror: long shots of Jews being shoved into boxcars, lying dead in the streets of the Warsaw Ghetto, herded toward gas chambers or simply staring at the cameras of Nazi tormentors or Russian, British and American liberators. And endless mountains of bodies, stacked outside crematoria or dumped into mass graves like rag dolls, faces twisted in the rictus of death, often barely recognizable as human beings. I remembered watching the movie on television as a kid with my family when it came out, but I’d forgotten what it felt like.

It’s not as though the Holocaust hasn’t been on my mind all these years. Even if I wanted to ignore it, America doesn’t let you. Our screens are flooded year after year with movies and television programs about it, each attempting some new angle or untaught lesson. They’ve ranged from Oscar-winners like “Schindler’s List,” “Life Is Beautiful” and “The Pianist” to thrillers like “Escape from Sobibor” and blockbuster miniseries like 1978’s “Holocaust.” As for documentaries, for a while it was news when the Oscar went to a documentary that wasn’t about the Holocaust.

Strikingly few films, though, ever showed — even in reenactment — the grotesque reality of the Nazi killing machine itself. Mostly they’ve looked for individual human drama amid the inhumanity. The monstrous underlying truth usually has been merely hinted at. Only a tiny handful have included live footage of the death camps.

By coincidence, I saw a longer collection of live death camp scenes just a few days after that first class, when HBO premiered its new 78-minute documentary, “Night Will Fall.” It tells the story of the making and abrupt suspension, due to emergent Cold War politics, of a planned 1945 British government documentary titled “German Concentration Camps Factual Survey.” The HBO film, released this year in observance of International Holocaust Remembrance Day, dovetails well with the oft-taught lesson that’s become a key part of our collective narrative: that the memory of the Nazi genocide was suppressed for decades after the war, reawakened only in 1967 by the shattering events leading up to the Six-Day War, when Israel’s neighbors were threatening her with extermination. Ever since then, the Holocaust has risen to the forefront of our collective consciousness.

But that doesn’t explain the acclaimed national broadcast and Oscar nomination for “Let My People Go” in 1965. Nor a whole host of movies that came before it.

Memory is a tricky thing. When “Let My People Go” first aired, the Holocaust footage stunned critics. The New York Times, called it “remorseless” and noted that much of it “had not previously been seen” — what reviewers are now saying about “Night Will Fall.”

It wasn’t new even then. In late April 1945, while war was still raging in Europe, movie theaters across America were screening a six-minute Universal newsreel that graphically displayed the horrors greeting General Dwight Eisenhower, Allied supreme commander, when he visited liberated Buchenwald.

Later that same year, 1945, the U.S. War Department produced a documentary short, “Death Mills,” directed by famed Hollywood auteur Billy Wilder, with an unbroken 21 minutes of horror filmed in the camps by American soldiers just after liberation. The footage appeared again in 1961 in “Judgment at Nuremberg,” which won three Oscars. By the time “Let My People Go” aired in 1965, American audiences were reasonably familiar with the insides of death camps.

Not that Hollywood-style Holocaust drama was lacking in the early years. It emerged immediately after the war. “The Search,” about a Jewish child separated from his mother in the death camps, won two Oscars in 1948. In 1952 Kirk Douglas starred in “The Juggler,” which tells about a broken Holocaust survivor who’s restored to life in the new state of Israel. Another film about a traumatized survivor, “The Pawnbroker,” won Rod Steiger an Oscar nomination in 1964.

And “The Diary of Anne Frank,” which won three Oscars in 1959, has arguably done more — together with the Pulitzer Prize-winning play and the international best-selling book both were based on — than any other depiction to tell the world the truth of Nazi depravity.

Why, then, do we believe the Holocaust went unspoken for decades? In part there may be psychological processes like memory repression that cause us to be constantly surprised anew by death camp footage. Part of it, too, must have to do with ideology.

Before 1967, the Holocaust was a universal human tragedy, symbolized by Anne Frank’s boundless belief in humanity. After 1967, it was the world versus the Jews, symbolized by the continuing battle over Otto Frank’s alleged de-Judaization and universalization of his daughter. Did making her everyone’s child betray us, or redeem us?

Before 1967 “The Juggler” and “The Pawnbroker” could explore a survivor’s psychological scars. After 1967, not so much. Before 1967, we learned from the Holocaust that the world can and must be made a better place for all humankind. After the trauma of 1967 and the growing isolation of Israel, the lesson was that Jews should understand the world couldn’t be worse.

Watching “Let My People Go” after 50 years, I’m not sure whether I was struck most by the horror of the images on the screen or the memory of all the hope that’s been lost. Probably both.

When ‘Let My People Go’ Tugged at World’s Heart