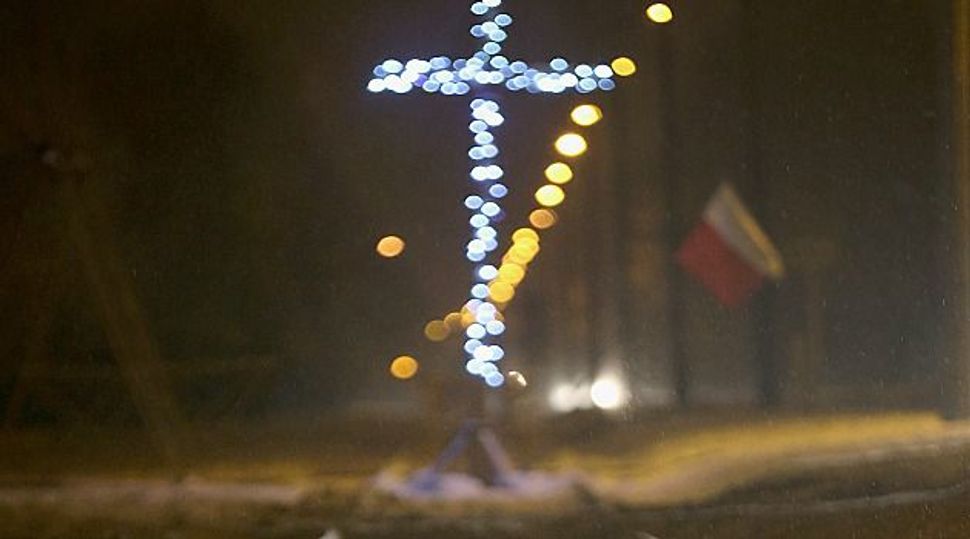 Survivors and families make their way to lay candles at the Birkenau Memorial during the commemoration of the 70th anniversary of the liberation of Auschwitz./Getty Images

Oswiecim, the site of Auschwitz-Birkenau and of the commemoration of the 1945 liberation of the camps, is typical of Polish cities in at least one respect: many Jews once lived there, and now they do not.

A majority-Jewish town before the Holocaust, Oswiecim has had an overwhelmingly Catholic population for decades. And while for much of the world the Jewish trauma of the Holocaust is front and center in its remembrances, many in Poland have long focused on the non-Jewish victims of the war.

During the 70th anniversary commemoration, over 150 people gathered at Oswiecim’s Center for Dialogue and Prayer for a mass service led by Cardinal Stanislaw Dziwisz, the Archbishop of Krakow. Dozens of non-Jewish survivors of Auschwitz sat for prayer and liturgical music in the company of Polish President Bronislaw Komorowski, who also spoke at the anniversary event.

Some, though, are not content to place Jewish and non-Jewish victims alongside each other, resenting the focus on Jewish suffering as an overemphasis.

On the day of the ceremony, an elderly man from the far-right group Telewizja Narodowe had erected with a 2-story tall wooden cross near a makeshift encampment on the roadside. Sitting beside a wood-burning stove under a blue canopy, he wordlessly declined an interview. But his point was made, not least because his cross sat directly opposite the so-called Auschwitz Cross, long a symbol of Catholic-Jewish tensions over the site.

Local members of a Polish nationalist group erected a cross near Auschwitz.

Erected to commemorate Polish prisoners killed by the Nazis in 1941, the 26-foot-high cross has been subject to intense criticism from Jewish groups. In 1998, hundreds of smaller crosses were placed around it, sparking condemnation from both Catholic and Jewish leaders and prompting the Polish government to order their removal.

The one-time presence of a Carmelite convent adjacent to the camps has also been a source of tension, and made headlines in 1989 when Avi Weiss, the Jewish community leader and rabbi at the Hebrew Institute of Riverdale in New York, scaled the Auschwitz fence with a group of protestors and dressed as concentration camp prisoners.

The conversation over what role the Church should play at the Auschwitz Memorial is just a prominent example of a long, sometimes uncomfortable dialogue about Catholic-Jewish relations in the country.

The Auschwitz Cross still stands today, and on the day of the anniversary ceremony, a small shrine stood at the bordering fence, with a portrait of Pope John Paul II, a few burned-out candles, and a Polish flag. The late Pope, himself a survivor of the Warsaw Uprising against the Germans in 1944, is often hailed for advancing Catholic-Jewish relations in Poland.

In 1998, though, John Paul II was on the other end of a controversy, after the beatification of Edith Stein, a German philosopher who had converted from Judaism to Catholicism and was killed at Auschwitz. At the time, the Anti-Defamation league called the decision “another step in the Christianization of the Holocaust,” echoing the language of many Jewish groups during the Auschwitz Cross affair.

History is raw in Poland; the lingering destruction of the war, and more recent memories of the communist regime, have given debates about the past a harder edge. At a Warsaw conference last September on German and Soviet crimes during the war, an ordinary academic panel devolved into heckling and disorder during the question and answer session. The dissenters were mainly elderly Poles, arguing over issues that can seem arcane to outsiders – say, precisely how many Ukrainians were involved in a wartime tragedy in some small, particular village.

As several speakers alluded to during yesterday’s 70th anniversary event, not many living survivors will be present at future memorials. But their non-Jewish counterparts in Poland are also dying out, and their absence is likely to shape the country’s collective memory of the Holocaust. That generation saw firsthand many of the war’s horrors, and provides a living link to the multi-ethnic Poland that existed before the war.

As Auschwitz marks another historic day, Poland is increasingly comprised of people who formed their historical narratives during the post-war communist regime, rather than during World War II. If past is prologue,an uneasy contest will continue over the place of the camps, and a soil soaked with Jewish blood, in a Catholic country.