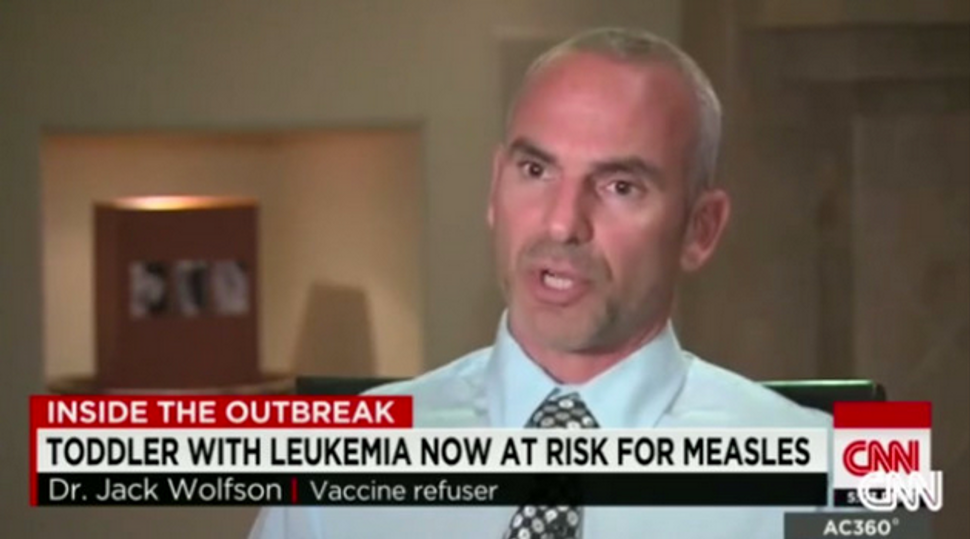 A Jewish doctor in Arizona has become the unapologetic face of the anti-vaccine movement. In an interview with CNN, Dr. Jack Wolfson said he wouldn’t mind if his un-vaccinated child got another child sick.

Wolfson has given multiple interviews in recent days defending his decision not to vaccinate his own children, recommending that others not vaccinate their kids, and condemning parents who had allowed their children to be vaccinated.

Interest in the issue has grown following a measles outbreak at Disneyland in California that has been attributed to families that refused vaccinations for their children.

Wolfson has been a member of Chabad of the East Valley, a Chandler, Arizona Chabad congregation. He grew up in Chicago and received medical training at the Chicago College of Osteopathic Medicine. His wife, Dr. Heather Wolfson, is a chiropractor.

Wolfson suggested that children could somehow benefit from contracted diseases that can be prevented by vaccines.

“We should be getting measles, mumps, rubella, chicken pox, these are the rights of our children to get it,” Wolfson told The Arizona Republic, a statewide newspaper.

In another interview with the Washington Post, Wolfson suggested that those who allow their children to be vaccinated are bad parents. “Don’t be mad at me for speaking the truth about vaccines,” Wolfson told the newspaper. “Be mad at yourself, because you’re, frankly, a bad mother. You didn’t ask once about those vaccines. You didn’t ask about the chemicals in them.”

Wolfson’s views are far outside the medical consensus. Nearly all doctors recommend that parents follow the CDC’s schedule of immunizations, which includes inoculations against Hepatitis B, measles, mumps, rubella, and the flu, among other diseases.