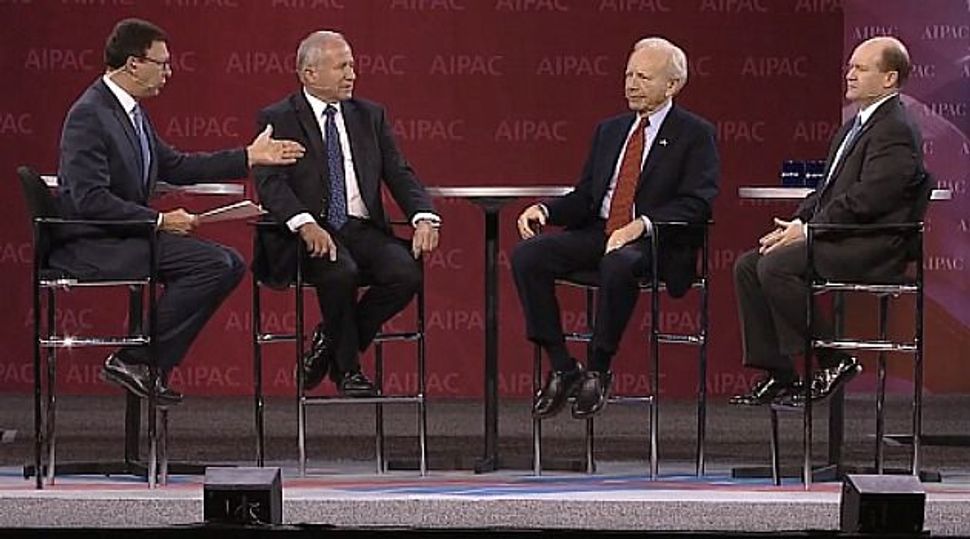 Image by courtesy of AIPAC

The session on “Strategy and Security in the Middle East” at last year’s AIPAC policy conference was like many other such discussions in organized Jewish life. There was a moderator and three “distinguished” experts, forced to sit on the high, spindly chairs favored by event organizers but often awkward for guests to mount. There was a long list of subjects to cover, too many for the time allowed.

And not a woman in sight.

Pointing out the absence of women in public policy discussions is not a new task for us; we’ve been editorializing about this for years. But now comes a new study placing the AIPAC example, and so many others that occur regardless of partisan inclination, in a broader context.

Turns out that this is not just a Jewish problem. Despite the large number of senior, accomplished women in the field of Middle Eastern studies, there is a documented absence of women in public discourse. Two scholars — Tamara Cofman Wittes of The Brookings Institution and Marc Lynch of George Washington University — examined the public programs hosted by six influential Washington think tanks last year and found that 65% of them involved not a single woman. Not one.

“How is it possible?” Lynch asked rhetorically in a follow-up conversation. “There is a surplus of well-qualified women working on these things that does not get reflected on panels and media appearances. They are there and not being invited.”

If you care about gender equity, if you care about hearing from the widest array of smart people, you will be dismayed at these numbers. Wittes published the data on her blog, and it shows that the lofty Council on Foreign Relations was the worst offender — Eighty percent of its programming consisted of only male speakers. Wittes’s own institution, Brookings, fared only a little better, at 67%. The most inclusive was the Wilson Center, still at 48%.

Either those in charge didn’t notice the domination of guys in suits (shame on them!), or they wrongly believe that there aren’t enough women of stature to invite.

Lynch and Wittes demolish the second excuse. Nine of the 15 members of the steering committee of the Project on Middle East Political Science, which Lynch runs at GWU, are women. Women head up six of the most prestigious Middle East think tanks, and more than a dozen women have served as U.S. ambassadors in the region. Well-known women experts teach at Yale, Harvard, Princeton, Stanford, Chicago, Northwestern, American, Georgetown and other universities.

In their call to action, Wittes and Lynch suggest that men decline to appear on a panel unless it includes at least one woman — a version of the pledge that Advancing Women Professionals has championed for years in the Jewish community in its Men as Allies campaign.

It’s a strange sort of consolation to know that the absence of women in the Israel debate within the Jewish world is but a piece of a larger problem. Women who have complained about this for years are not imagining a slight; they are reflecting a reality that can and must change. Perhaps in this case, Jews can actually show the way.