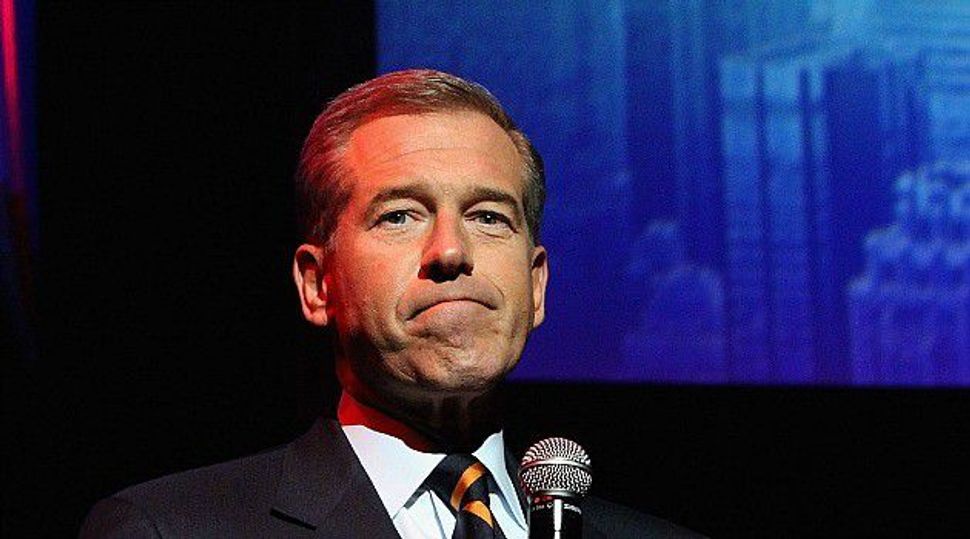 (JTA) — By now, anyone interested enough to have read about the issue knows the basic facts: Longtime NBC anchor Brian Williams lied about having been on a helicopter that was shot down in Iraq in 2003. In truth, he was on a different helicopter that landed unimpeded about a half hour after the other chopper was forced down by hostile fire.

The apology Williams offered last week when the truth of the matter became impossible to ignore (thanks to a reporter from Stars and Stripes) was deemed insufficient by the commentariat and, eventually, by NBC. Williams essentially said it was an honest mistake – “I made a mistake in recalling the events of 12 years ago,” was how he put it. But critics said it was an outright lie and that his failure to own up compounded the original lie with a dishonest apology.

Now NBC has suspended Williams without pay for six months and is undertaking its own internal investigation to determine what else Williams has said doesn’t hold up under scrutiny.

There are a couple of things that are confounding to me about this whole turn of events.

The first is the most obvious: that a man this likable, this good-looking, this … tall could have peddled this untruth for so long. Who could ever have imagined he was lying through those picture-perfect white teeth? (Except for the ignored military veterans who have been grumbling about Williams’ dishonesty for years, of course.) Shame on you, Williams, for ruining what had been up till now a happy relationship.

Not that I watch “NBC Nightly News,” of course. Though I grew up on Tom Brokaw and still find his South Dakota lilt and peculiar staccato the ultimate authoritative voice in news, as an adult I don’t think I ever sat down to watch the early evening TV news, and now I don’t even own a TV. But I did like Williams’ cameos on “30 Rock,” stints on “Saturday Night Live” and guest appearances on the “Daily Show” with Jon Stewart (whose just-announced retirement from the show is a real tragedy, if we’re already bemoaning the loss of a news anchor).

What really confounds me about the Williams affair is this ill-conceived punishment.

I just don’t get it. If the guy lied and is no longer a credible reader of the news – because that’s really what anchors do these days – then what does a six-month suspension do? It’s long enough for NBC to lose its position as the leader among networks in the nightly newscasts, and for viewers to get accustomed to a new anchor. But then why bring Williams back in six months?

Stories about helicopter-gate (is anyone else using this term?) will just crop up again ahead of his return, and I don’t understand how six months of sitting in the corner facing the wall (and foregoing a paycheck) will make Williams more honest or trustworthy.

If NBC really wants to take a stand, why not get rid of Williams for good?

If it’s that the network wants to be seen as punishing Williams but doesn’t want to lose an anchor who has been good for business, then wouldn’t a shorter punishment make more sense? A month, say, would be enough time that it would be more than a slap on the wrist but short enough that the broadcast conceivably could move beyond the scandal in a few weeks’ time.

I called a couple of Jewish guys I know who deal in crisis PR, among other things, to see what they thought about NBC’s handling of the Williams affair.

“Six months is shocking,” said Stu Loeser, a former spokesman for New York Mayor Michael Bloomberg. “I think it surprised everyone. It’s attention getting. It shows that Brian Williams’ NBC bosses take this seriously. This is a big deal. This is not stepping down for two weeks, this is not taking a vacation.”

“You need something that breaks through. If it’s two weeks, people won’t buy it,” Loeser said. “Six months puts him back in play at the end of summer, before Labor Day, a time of new starts. That’s actually a good time for him to come back into the public consciousness. I don’t exactly know what his path to return is. Does he do it straight in the anchor chair or reporting from wherever the breaking news story of the day is? That remains to be seen.”

In the meantime, Williams has to think hard about what he does with his time, Loeser said.

“He is a multimillionaire who has been given six months of penance,” Loeser said. “He can’t just be seen in the social scene. You can’t just do rest and relaxation. The narrative matters, and he’s got to have a good answer for what he did on his spring and summer vacation.”

As for NBC, the six months buys the network some important flexibility, Loeser said. NBC executives can use the time to run trials for a replacement anchor without locking into a long-term contract. It’s a strategy, Loeser observed, that NBC could have used for “Meet the Press,” which still hasn’t found the right permanent replacement for the late Tim Russert.

Steve Rabinowitz, a former media strategist for President Clinton and now president of Rabinowitz Communications, a Jewish-heavy PR shop in Washington, said that by issuing such a harsh suspension, NBC executives showed how seriously they take the credibility of their news operation and their responsibility to the public.

“The on-air apology was the right thing to do, but then he went into radio silence,” Rabinowitz said.

“What he did wrong was he didn’t make himself available for aggressive interviews, where people could really see his angst, the pain, his remorse, the regret,” Rabinowitz said. “They should have called Letterman or gone on a competitor’s air or done an interview with the media critic for The New York Times.”

As for whether Williams’ original apology for distorting the Iraq War story was dissembling or not, Rabinowitz said he’s not so sure.

“When I read his apology, I thought it was plausible,” Rabinowitz said. “It’s possible that over time he started out telling the story accurately and then it muddled and then it became outright untrue.”

Whether or not Williams can reestablish the public’s trust — and whether NBC will give him the chance to do so — remains to be seen.