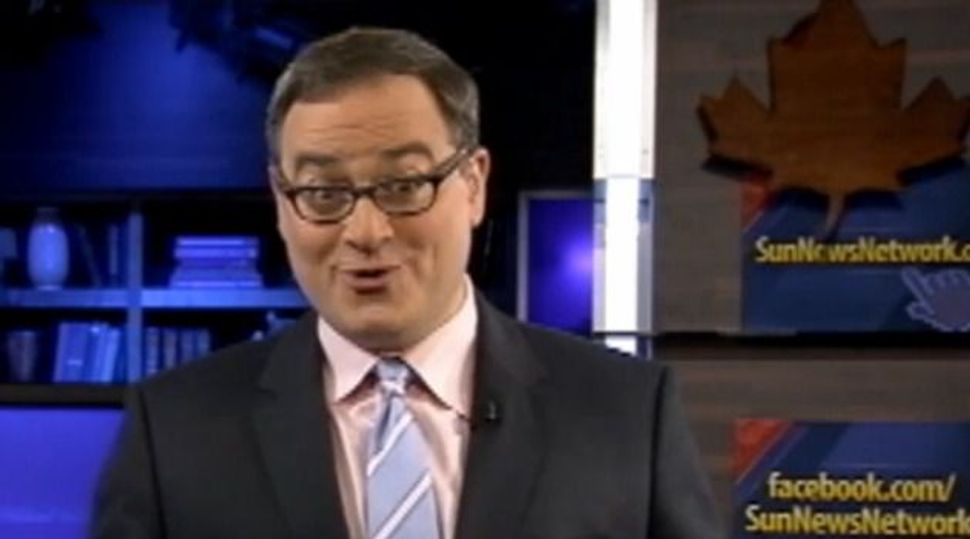 With its audience shrinking and losses mounting, a Canadian TV news network known for its pro-Israel views – and right-of-center politics – has pulled the plug after four years.

Sun News Network, whose firebrand stances on hot-button issues earned it the sobriquet “Fox News North,” went dark this morning. The channel liked to claim it offered counterpoints to the “lefty bias” in Canadian media.

The channel was also home to controversial personalities like Ezra Levant, who lost a 2012 libel case after calling a describing a Muslim law student as “a serial liar, a bigot and a Jew-hating ‘illiberal Islamic fascist’” in a blog post, according to the National Post.

Part of the network’s challenge might have been a cultural disconnect in Canada, where viewers seemed less receptive to Sun News Networks’ take-no-prisoners attitude. But Sue-Ann Levy – like Levant, a columnist for the Sun newspaper in Toronto, the network’s sister property – told the Forward that the channel faced more fundamental problems.

“I’d be on there commentating on something. Then I’d go on [local all-news channel] CP24,” said Levy, a staunchly pro-Israel out lesbian who’s now the Sun’s investigative columnist. “Half the world would see me on CP24, but no one would say they saw me on Sun News Network. The channel fought hard to get a presence on the TV dial, but they got lost in the black zone of channels over 100. It wasn’t promoted that well. I think that was as big a problem as anything.”

According to the Toronto Star, the closure of the conservative-angled news channel followed months of uncertainty surrounding its fate, after news conglomerate Postmedia Network Canada Corp. announced plans to purchase the Sun Media newspapers and websites from media powerhouse Quebecor for $316 million.

The channel’s closure means more than the loss of 200 jobs, Levy said. “It was often criticized as Fox News North. I don’t think it was even close. I think it was a wonderful contrast to the pablum that TV news has become. In Toronto broadcast journalism is a race to the bottom – it’s infotainment.”

Sun News Network, she said, “actually provided some wonderful insights – the other side of the story. I’m going to miss that, and I’m going to miss seeing people like Ezra Levant. He’s outspoken, and maybe a little dramatic. But he covered Islamaphobia, Muslim infiltration and fanaticism in ways we don’t see elsewhere. These people were smart, intelligent, and provided smart perspectives.”

As for her own broadcast profile, Levy says the closing might actually open up new windows. “I get called on because I’m the politically incorrect person. Sun News Network was always my priority. But this frees me up. And that view isn’t getting out as much as it should.”