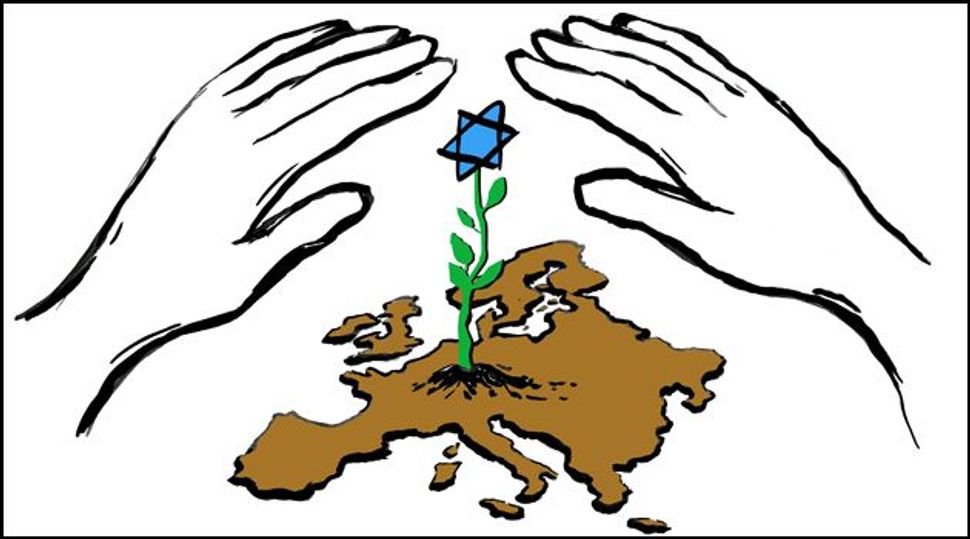 First Paris, now Copenhagen. This annus horribilis for European Jews has become even more frightening, as the names of capital cities are now synonymous with anti-Semitic attacks creeping across the continent. We hesitate to ask, but — will the list grow?

Israeli officials, aggressively led by Prime Minister Benjamin Netanyahu, have a ready answer to this terror: European Jews should “come home” to Israel. To emphasize the point, the government approved on February 15 a $46 million plan to absorb Jewish immigrants from France, Belgium and Ukraine. (This was just as the deadly attack on the Copenhagen synagogue was unfolding. No word on whether Danish Jews would also be included.)

From the perspective of a safe, powerful community in the Diaspora — that is, here in America — we offer a contrasting answer: Instead of lecturing European Jews, listen to them. Instead of assuming they want to flee, find out whether they want to stay and, if so, what they need to make their lives more personally secure and Jewishly enriched. Instead of imposing our anxieties and agendas on proud, disparate communities many hundreds of years old, pay attention to what they say, how they behave, how they imagine their future.

And then we should adjust our advocacy, philanthropy and emotions accordingly.

We know what the official leaders of these communities believe, and, to some degree, their insistence on remaining in their home countries is both self-serving — after all, giving up on European Jewry means giving up on them — and heartbreakingly optimistic.

Commenting after the attack, Jair Melchior, Copenhagen’s chief rabbi, flatly rejected the idea that Jews should leave Denmark. “The terrorists must not control our lives,” Melchior said. “We need to concentrate on living our lives as normally as possible after this difficult situation. The Jewish community in Copenhagen is strong.”

All these communities deserve much more protection from their respective governments; as a breach of civil society, this outbreak of terrorism is, ultimately, the public’s responsibility to end and uproot. But those who wish to stay are also asking for the tools to maintain Jewish religious and cultural life: more rabbis; more teachers and educational materials, and more support for converts. Yes, even in this fraught climate, some Europeans are seeking to reclaim their Jewish family roots or to embrace Judaism anew, and their courage ought to be supported.

Writing in the Guardian, Keith Kahn-Harris, a London-based writer and sociologist, imagined what would happen “if and when” the violent anti-Semitism expressing itself on the continent spread to British shores.

“If and when it happens,” he wrote, “Jews like me will need compassion, sympathy and support. But perhaps most of all, we will need the dignity and integrity of our community to be maintained. We will need to be listened to, even when what we express is not easy to hear.”

Kahn-Harris acknowledged that his fellow Jews may vehemently disagree on the cause of the rise of anti-Semitism and on whether immigration is the best response. But those who attack Jews don’t much care about those distinctions. “An attack on one part of the community will be an attack on us all. If we are united in that vulnerability — and we may not like being lumped in together — then the response has to at least try to preserve that uncomfortable unity.

“So if and when it happens, I hope that those who are not British Jews will react in ways that preserve our dignity and coherence as a group and do not simply exploit and exacerbate our divisions.”

Why is it so difficult for Israeli leaders like Netanyahu to understand? Perhaps it’s no coincidence that the first prime minister born in Israel cannot relate intuitively to Jews that have dual or multiple identities. Richard Ned Lebow, a professor at King’s College London, has dissected the nationalistic impulse that drives Netanyahu and so many other world leaders to “desperately want people to identify with their project and define themselves in terms of it.”

But by their nature, Diaspora Jews reject such binary choices, selecting instead to identify with their home country and Israel, to situate their Jewishness within a pluralistic environment.

“Their acceptance and success as citizens of these countries has been hard-fought and, in Europe, built on the ashes of Shoah,” Lebow wrote in The Telegraph. “It is nothing short of insulting for Israel’s leader to tell them to give this all up for a new and uncertain future.”

A subtle lesson here is to recognize the distinctions of culture. Jews in Israel, while often facing great danger in war and terrorist attacks, can wear their Jewishness as openly as they care to, in whatever way matters to them. In many places in the United States, the same is true, so infused is Jewishness as part of our national character.

But racial, ethnic and religious identity in Europe tend to be more subsumed, expressed more quietly, where the right to be whoever you want to be is not as pronounced as the social obligation to get along, even when history may cloud the path.

Rossella Tercatin, a young, talented Italian Jewish journalist living and working in Rome, wrote in the Forward a few weeks ago:

“The truth is that living in a state that played an active part in perpetrating the Holocaust, where you know that the parents and grandparents of your neighbors could have easily been responsible for the persecution of your parents and grandparents, is not easy. It means living with a physical as well as spiritual awareness that your home country and your fellow citizens betrayed you, not long ago.

“At the same time, I feel offended when anyone suggests that Jews should leave Europe because it is not safe. Making aliyah to Israel is a wonderful, personal choice that everyone should make out of his or her own free will because of the realization that it is best for life and for ideals, and not out of fear.

“We must not give up being part of the project of making our countries and our union a better place, a space of freedom and security. In Italy, Jews have been around for more than 2,000 years and they are Italian through and through. There is so much that we have given and are giving to Europe. But there’s also so much that Europe is and must keep on giving to the Jewish world.”

Our responsibility is to help them do that.