Learning To Embrace the Hybrid Jew 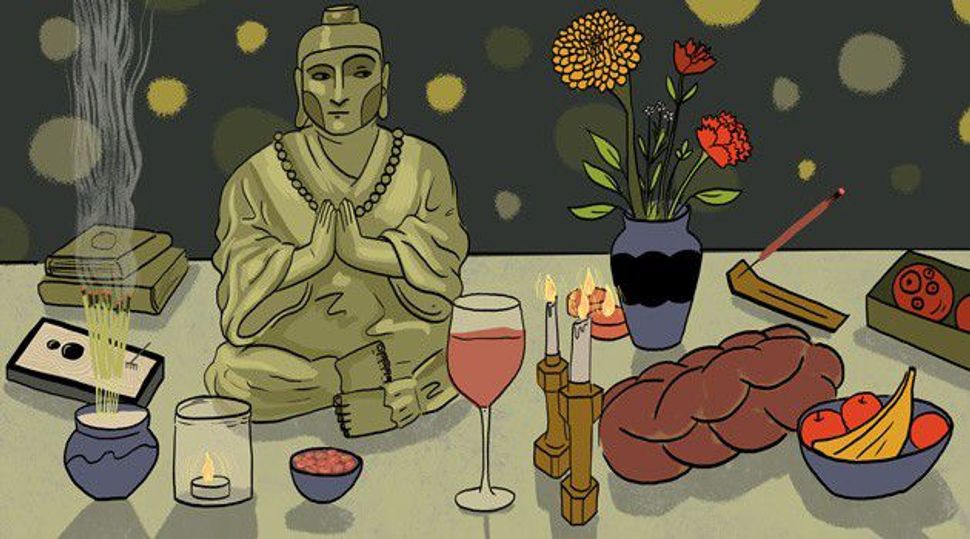 Having It All: The hybrid Jew finds a balance between Judaism and other religions. Image by Lily Padula

One of last month’s most-read articles on forward.com was an installment of the Seesaw, the Forward’s group advice column on multi-faith families, entitled “I Don’t Want to Be Jewish Anymore.” It showed how little we in the Jewishly-engaged world (by definition, that’s you) understand about the other 70%.

Let’s start with the title, presumably written by one of my colleagues here at the Forward. Readers may not be aware that editors, not writers, usually write headlines. As it happens, this one was simply inaccurate. Nowhere does the questioner say she does not want to be Jewish anymore. On the contrary, she says quite clearly that she would continue to participate in Jewish communal life.

What she wants, now that her children are grown and in Jewish families of their own, is “to return to worship” with the Society of Friends (Quakers), in addition to her synagogue.

Both-and, not either-or. Not only is this not “not being Jewish,” it’s how more and more Jews actually are Jewish today. Hybridization is a fact.

First, multi-faith families are the majority among non-Orthodox Jews, and many of those families continue to visit extended families for holidays, and attend non-Jewish as well as Jewish houses of prayer.

Second, increasing numbers of Jews (again, we lack solid data) find themselves nourished by multiple faith traditions. I am one such Jew. I am both a rabbi (nondenominational) and teacher of Buddhist meditation — and at Buddhist meditation centers, not just Jewish ones. And over the years, I have gone from being a Jew with an interest in Buddhist-inflected Jewish meditation to a full-on BuJu. When a close family member passed away recently, I drew comfort both from shiva and from Roshi Joan Halifax’s dharma teachings (in particular, her book Being with Dying). Of course, there are points of tension. But for me, it’s both/and, not either/or.

Similar hybridization is taking place among Jews who take yoga seriously as a spiritual path, and smaller numbers of Jews exploring Sufism, Hinduism, and other paths. This does not mean there are no red lines — only that the lines are somewhere other than the doorway of a Quaker meeting house.

The most popular comments on the piece pointed this out. One said “Most of what Jews object to theologically in ‘Christianity’ is gone, or ignored, by the Quakers.” Another observed that “there are many Jews who attend Quaker meetings regularly.” Having done so myself (though not regularly), I concur. There is nothing theologically or Jewishly problematic about a Quaker meeting — which is often mostly silent, punctuated by individuals speaking from the heart (“moved by the holy spirit,” yes, but the ruach hakadosh is part of Judaism too). And, yes, there are often a lot of Jews there. (JuKers? QuaJews? Whatever.)

The specificity of the Society of Friends matters. The Seesaw questioner was not making offerings to a statue of Ganesh (not that there’s anything wrong with that objectively, of course, but there is according to normative Judaism). She wanted to sit in silence and be part of a progressive, spiritual community that feels like home to her.

The responses to her were a mixed bag.

Ruth Nemzoff was generally supportive, and understood that she wanted to “add your past spiritual practices to your present,” not substitute one for the other.

Scott Perlo, however, implied that she wanted to “leave Judaism,” and said that she cannot do so. He also suggested she never should have converted in the first place, which strikes me as a particularly tone-deaf and cruel thing to say. Thousands of people convert to Judaism because of their partners, and while that is not a traditionally approved motivation, surely we don’t want to insult them in this way.

And Harold Berman, also noting her problematic motivations, urged her to “give Judaism your best shot” and “fully explore what being Jewish could be in this new and very different phase of your life.” He also contrasted her with a presumably more successful Quaker convert whose “adult spiritual identity is 100% Jewish.” For Berman, hybridization is (at best) second best.

Berman also implied that Judaism could provide “what you miss about being a Quaker.” Note the identity-language here. She didn’t say she missed “being a Quaker.” She said she is “longing to return to worship with them.” That’s a crucial distinction. She wants to be a Jew who goes to Quaker meetings. What she misses is a particular spiritual practice, not necessarily an identity.

And the fact is, that practice is rarely found in Judaism. It’s not the case that everything you could possibly want from your spiritual life is found in Judaism. It isn’t. I’m sure, somewhere, there is a Quaker-meeting-style Jewish spirituality group. But even if she were to find it, it would be marginal, probably small, and probably stuck in some out-of-the-way classroom with pre-school pictures on the wall.

The spirituality of a Quaker meeting is profound. It is an opportunity for a community to hear directly what’s going on for people in their lives, and to sit as a group in silence. To me, it would make an excellent complement to more boisterous, joyous, freilach Jewish services. Once again: both/and, not either/or.

Ironically, Berman’s advice to the Seesaw questioner — “to pinpoint what you miss about being a Quaker” — is good advice for Jews as well. If we stop pretending that Judaism is the be-all and end-all for everything, we can pinpoint what it is good for, and appreciate it as such.

For example, maybe ‘native’ Jewish meditation isn’t as sophisticated as Zen. But maybe Jewish lifecycle rituals might be more life-affirming, more community-affirming, more juicy. Maybe Shabbat services aren’t as contemplative as a Quaker meeting — but maybe they are beautiful in their own ways, and by being thoughtful about their benefits (communal, spiritual, ethical), we can adjust the form accordingly. Depending on what you want to achieve, that might be more English, or less; more quiet, or less; more length, or less.

In this way, hybridization is a benefit, not a bane. We learn from other traditions — sometimes imitating them, other times focusing on the productive differences. Instead of rejecting hybridization as less than ideal, we should see spiritual diversity, like other forms of diversity, as an asset.

If for no other reason, Jews should embrace spiritual diversity as the reality of the 21st century. But we can do much better than that. Hybridization is for the best. As one commenter said of our Seesaw questioner, “She should dwell in both houses. It brings honor to all.”

Learning To Embrace the Hybrid Jew