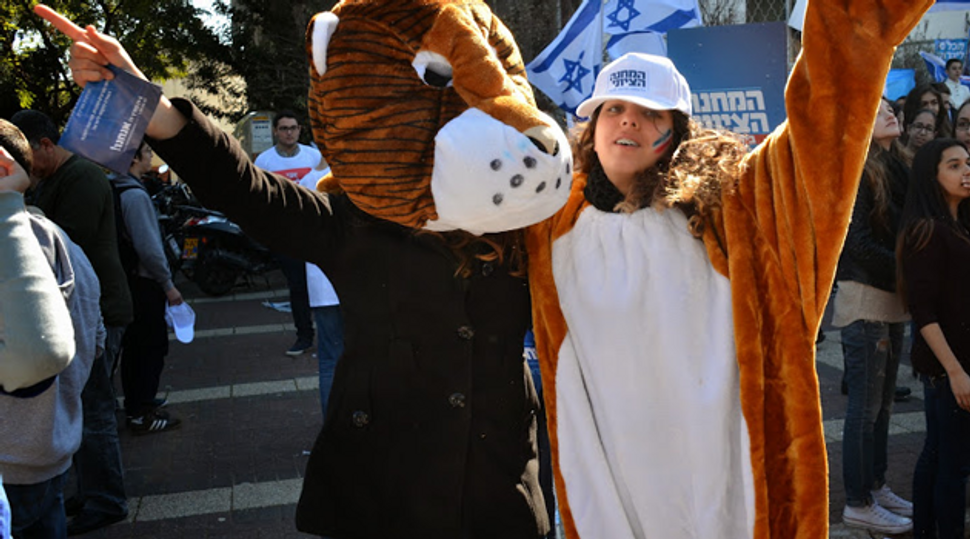 Blich High School is as ordinary as they come. I know, because I went there for four years. It’s located on Ramat Chen street, in a sleepy Ramat Gan suburb, next to a quiet local elementary school.

But around election season, Blich becomes something else, something important, as a flock of the best and brightest politicians use its auditorium to hone their speeches.

Why do they do this? Well, Blich is a sort of election weathervane. Every year, a month or so before the real election, the school stages a simulation. Students split into parties and become responsible for bringing politicians from those parties’ real-world equivalents to speak at the school. The real-world leaders are usually quite keen, because the fake elections at Blich have often predicted certain trends in Israeli politics.

Just two years ago, for example, Yesh Atid did stunningly well in Blich, winning the #2 spot in the school — and predicting its astronomical victory in the real elections, where it succeeded in bringing to power 18 MKs. That was more than any analysts or pollsters had anticipated.

Israel Zinger, now the mayor of Ramat Gan, then the school headmaster, started this tradition in 1977, when it helped predict an unprecedented Likud loss. Current principal Revital Lev-Goren was just a student at the time. “This was always a very passionate process,” he said to a crowd of teenagers at one of the party speeches. “Parties may pay millions of shekels for PR all over the country, but for for some reason, this democratic exercise has a real impact.”

Sadly, I was not allowed to attend my own fake high school elections: I was an 8th grader and only 11th and 12th graders were allowed to vote. Locked out of democratic heaven (alas!), I was at least allowed to partake in some of its activities. I remember getting a free notepad from Hadash — it was my first exposure to the Israeli communist party. And I was still allowed to go outside to coat myself with stickers and ditch classes.

Yes, tell high schoolers about democratic exercises and they may not get too excited — but an exercise in democracy in exchange for skipping classes? That’s a jackpot right there.

As the nation’s most important politicians are speaking, you can hear giggles and mumbling in the background. And what else would you expect from high schoolers? The politicians don’t mind. They speak to these kids as if they’re all peers. They know they’re talking to current and future voters.

This time around — as the school’s election videos make clear — the politicians have specific messages for the audience.

Tzipi Livni says to the youth, we want to make sure that when you join the army, you have the world’s greatest super-power behind you, that you have that confidence (hint: unlike Netanyahu, who is alienating the U.S.).

The questions the kids ask are smart and serious, and I’m honestly surprised as I watch the videos. Was I this level-headed as a teen? I know my youngest brother is. Closing in on his 18th birthday, he calls to tell me who he’s debating between. “Shas and Israel Beytenu?” I joke. He does not find it funny. He is taking this very seriously.

The big drama happens when Naftali Bennett comes in to speak to the crowd. Students from Meretz have spent the morning covering the school with pride flags. They stand at the back of the auditorium, facing the head of the Jewish Home party, whose party members have been vocally anti-gay. During the Q&A, a gay student (the representative of Meretz at the school) actually confronts Bennett.

But the biggest media sensation happens when a kid gets up wearing a T-shirt that says “I have two mothers and I’m not sorry,” a reference to Bennett’s own campaign. He paces angrily and looks visibly upset as he quotes Bennett’s party members, who in a video called homosexuality an unnatural disease.

Bennett responds with his usual “we are all brothers,” but says that asking his party members to accept the LGBTQ lifestyle “is like asking a kosher restaurant to serve milk and steak.”

When you look at pictures from the election activities in Blich’s courtyard, they look more like an extravagant party than anything. Yesh Atid has gotten two stages with dancers to come to the school grounds, the Zionist Party just one and the rest of the parties have had to resort to banners, flags and streamers.

Why spend so much money on parties with 17-years-olds? My brother says he doesn’t buy it, anyway: “It’s pretty aggressive marketing.”

After an outdoor political pep rally and a last election panel where the student heads of the parties present and debate about the different parties, the ballots are cast and the school’s principal comes on stage to announce the results:

So what has been projected at Blich this year? A big win for the Zionist Union, and shockingly, again, a big win for Yair Lapid? Was it the parties and the stages that did it? Was it that he came to the high school himself and answered, quite remarkably, every question thrown at him? Or was it the selfies he took with these zealous teenagers? Right now, the real-world polls are showing that Likud and the Zionist Union are more or less equal. But if Yesh Atid and the Zionist Union get the majority of the votes, is there a possibility of actually — gasp — no Bibi?

When I ask my brother via Whatsapp who he voted for and why, he says, “I chose to go with the party that represented my ideals and values, and not vote strategically.”