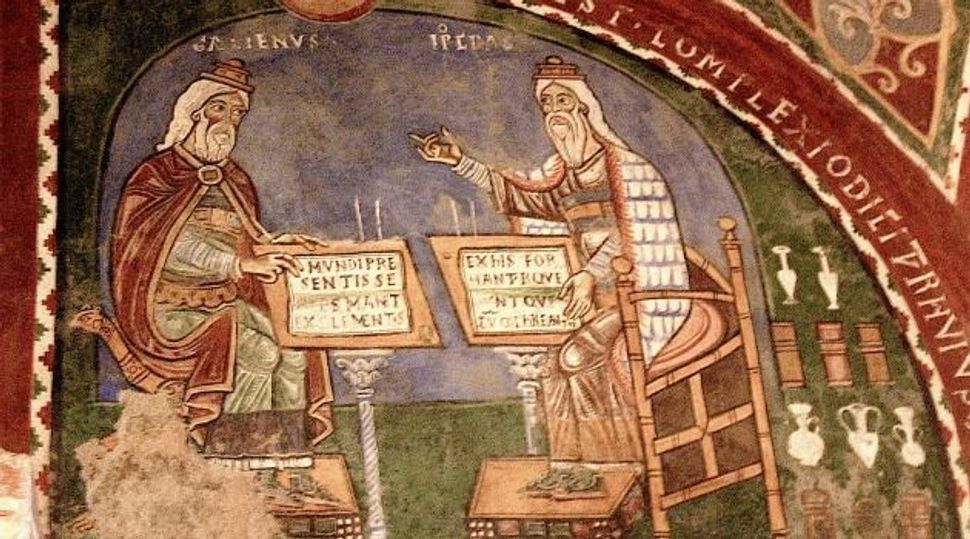 The tradition of metzitzah b’peh goes back to biblical times but has created a modern-day dilemma for religiously observant Jews.

New York City officials linked the practice to 17 cases of infant herpes since 2000, of whom two died. In the latest development, the city will stop requiring mohels who use oral suction to have parents sign consent forms, which many hadn’t complied with anyway. Instead the city will focus its efforts on educating members of the ultra-Orthodox community about the risks and dangers of the practice.

But why do some Jews practice oral suction circumcision, or metzitzah b’peh, and where does the rite come from?

Though to a small number of observant communities, the practice is routine and normal, to cosmopolitan sophisticates it may seem pretty gruesome. After the mohel cuts off the foreskin, he uses his mouth – oral suction, rather than say a sponge – to effectively clear the wound on the baby’s penis of blood, lest it clot and decay.

As for where it arose, metzitzah b’peh is a time-honored tradition codified in the most important Jewish scripts, much like circumcision itself.

We first encounter the practice in the Mishnah, the first compendium of laws of rabbinic Judaism (c. 200 CE): “We perform all the requirements of circumcision on the Sabbath: We circumcise, uncover, suck, and place a compress with cumin on it” (Sabbath 19b).

The critical word here is the Hebrew word for suck: metzitzah.

In the Talmudic commentary on this passage in the Mishnah (Shabbat 133b), the 4th century rabbi Papa of Babylon writes that failure to perform this suction is dangerous for the baby, and any mohel who neglects to perform the ritual should be fired.

In other words, the rabbis viewed metzitzah as a health measure. Their thesis of medicine and disease was informed by the prevailing theory of the time – Hippocrates’ theory of the four humors, authoritatively expanded upon by the prominent Greek physician Galen in the 2nd century.

A 12-century mural showing Galen and Hippocrates, though they lived hundreds of years apart, from Anagni, Italy. Photo by: Nina Aldin Thune, Wikimedia Commons One of the main treatments Galen prescribed for an assortment of ailments was bleeding, which he believed was a way to restore the “equilibrium” between blood and the other three humors – phlegm, yellow bile, and black bile. He also believed that stagnating blood decays.

Specifically when it came to treating wounds, his theory led Galen to prescribe that blood be prevented from building up in and around the wound, lest it clot and rot, causing the wound in turn to rot.

Oral suction then, seems to have developed as a way to ensure that the circumcised baby is properly bled, that no clots form and cause decay, and that all his humors are in equilibrium.

The science of medicine and outbreaks

Jews obeyed this health directive for generations. But by the 19th century, science had acknowledged the microscopic agents of disease, the theory of the four humors was contested and the science of medicine began to change.

A turning point came in 1836, when an outbreak of sickness was observed among newborn Jewish babies in Vienna.

Rabbi Elazar Horowitz observed that all the infants, some of whom died from the illness, had all been circumcised by the same mohel. Moreover, all exhibited the same symptoms – an outbreak on their skin that progressed from their penis to the rest of the body.

Horowitz consulted with doctors, who postulated that the oral suction could be the origin of the trouble. His friend Dr. S. Wertheim, chief physician at the city’s Jewish hospital, suggested that the same cleansing, suction effect could be achieved by use of a wine-soaked sponge applied to the incision while the mohel pressed down on the penis.

Horowitz then wrote to his rabbi, Moses Sofer, the head of the Bratislava Yeshiva – one of the most important rabbis of the day – asking for guidance on whether to instruct his flock to stop using oral suction and use Dr. Wertheim’s method instead. Rabbi Sofer replied early in 1837 that the new method was acceptable, based on careful study of the etymology of the Hebrew and Aramaic verbs for suck – matzatz.

The word implied suction, Sofer wrote – but not necessarily with the mouth. If anything, the method of circumcision itself had already changed, the rabbi pointed out: the Mishnah calls for the use of cumin in the bandage protecting the circumcised penis, but over the generations, the spice had been replaced by other substances.

Following Sofer’s authoritative decision, during the 19th century, many rabbis began to instruct their community mohels to forgo oral suction and use other methods, though some leading figures in the ultra-Orthodox community argued that metzitzah b’peh was part of the commandment to circumcise and thus could not be omitted or altered.

In the late 19th century, as the West recognized the role of microscopic agents in disease, studies began to appear in medical journals tying oral suction to infant illness and mortality.

These days the practice is very rare, having been replaced, when at all, by alternative methods of suction.

Yet a minority of mohels in the ultra-Orthodox community continue to practice metzitzah b’peh, insisting that otherwise they would not be following the full letter of the law, and citing the Rabbi Papa saying that a mohel who doesn’t do so should be dismissed. Also, suction with the mouth is more efficient than trying to achieve it with, say, a dry cloth, they explain. And at least 11 infant boys contracted herpes in New York City since 2000, and two died. It seems that for some infants the exact meaning of the word metzitzah is the difference between life and death.