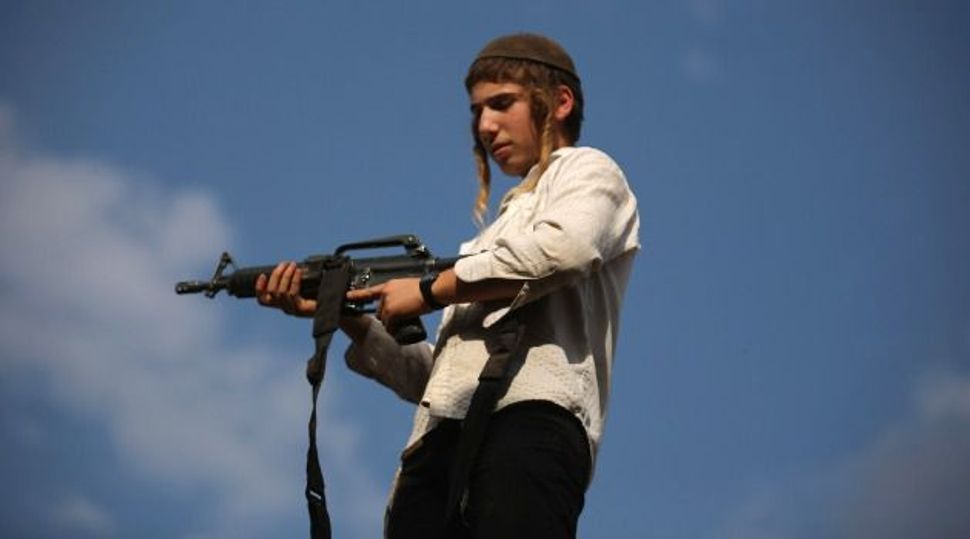 In an article originally titled “Why Every Jewish Man, Woman, and Child in Europe Should Get a Gun,” Liel Leibovitz claims that European Jews need guns because they can’t trust their governments to protect them from anti-Semitic “savages.”

Leibovitz chides those trusting in “reasonable measures,” arguing instead that, “European Jews with guns can make a difference.” Kudos for correctly identifying guns as the opposite of reasonable measures — but every other element of this claim bears debunking.

.@liel: Why every Jewish man, woman, and child in Europe should get a gun http://t.co/BZ4AGnOEcV

“In Europe, Jews are seen at best as a foreign element exercising undue influence,” Leibovitz claims. Really? “At best”? He then contradictorily cites French Prime Minister Manuel Valls as genuinely caring about Jews — before slamming him for not doing enough for their security.

Roger Cukierman, president of the CRIF umbrella group of French Jewish communities, quoted by JTA, seems to disagree: “We are fortunate to have a leadership that is perfectly attentive to the community’s needs.”

Such sentiments aren’t limited to Valls’ France. “We are touched by the concern demonstrated and actions taken for our well-being at all levels of government,” said Marty Bashevkin, vice president of the Jewish Community of Oslo.

At the Jewish community’s request, the street in front of Oslo’s only functioning synagogue was closed to traffic following the Denmark attack. Bashevkin adds, “The Norwegian society, including its Muslim community, has understood the effects this attack has on our Norwegian Jewish community and has made it clear that they wish to protect and support our small Jewish minority’s continuing presence and vitality.”

Would Leibovitz deride these Jewish leaders’ words as “lip service” — just as he mocks the Danish government’s response to Netanyahu’s aliyah invitation? What about Jewish Community in Denmark spokesperson Jeppe Juhl’s response, as reported by AFP: “We’re very grateful for Netanyahu’s concern but having said that, we are Danish — we’re Danish Jews but we’re Danish — and it won’t be terror that makes us go to Israel.”

On the other hand, for those who need guns around to feel safe, Israel might be the right place. Foreign visitors are often shocked by the number of Israelis walking around Jerusalem with assault rifles. But the proliferation of weapons there doesn’t seem to have made Jews actually safer than in Europe.

Given recent events there, France is often cited as increasingly dangerous for Jews. The 2012 killing of a teacher and three children in Toulouse was the worst anti-Jewish violence in France since 1982, when six were killed in a café shooting. But compare that to the 1,200-plus Israeli deaths from extremist violence during the same period. Even in more recent years, when such attacks have diminished, there’s no evidence that Jews are any safer in Israel. If anything, maybe French Jews should follow the Israeli exodus to Berlin.

As recent events prove the danger to be demonstrably real, European Jews have every reason to seek increased security. But since most still prefer not to go to Israel, would Leibovitz have them import Israel’s overkill security mentality to Europe?

Europeans themselves clearly favor a very different approach. My wife’s uncle, a Norwegian policeman, doesn’t even want to change the rules that restrict police from carrying weapons — for his own safety. He makes the commonsense assertion that if police routinely carry weapons, criminals will simply up the ante, resulting in even more violence.

If we needed further proof that guns won’t make anyone safer, Leibovitz shoots his own argument in the foot (sorry) with this awkward thought experiment:

Imagine for a moment that the folks being beaten, whose houses of worship are being attacked, whose children are being murdered, aren’t European Jews. Imagine they’re African Americans living in the heartland of the Old South in 2015, and that the people uploading murder videos to YouTube were racial supremacists …”

Just follow this logic to its conclusion: Would taking the fears of the African American community seriously by giving them guns solve anything? No need to be hypothetical or race-specific: Has the proliferation of guns in all segments of U.S. society stopped bigots from attacking minorities who have the right to bear arms? Instead, studies show that guns are far more likely to kill family or friends than to guarantee protection.

What will truly make Jews safe are “reasonable measures” like effective law enforcement and the promotion of social values of tolerance, diversity and respect for all people. For communities living in fear, that’s a lot harder to wrap your hands around than a Glock, but it’s a far better guarantee of real security for everyone.