Grappling With God’s Wrathful Side 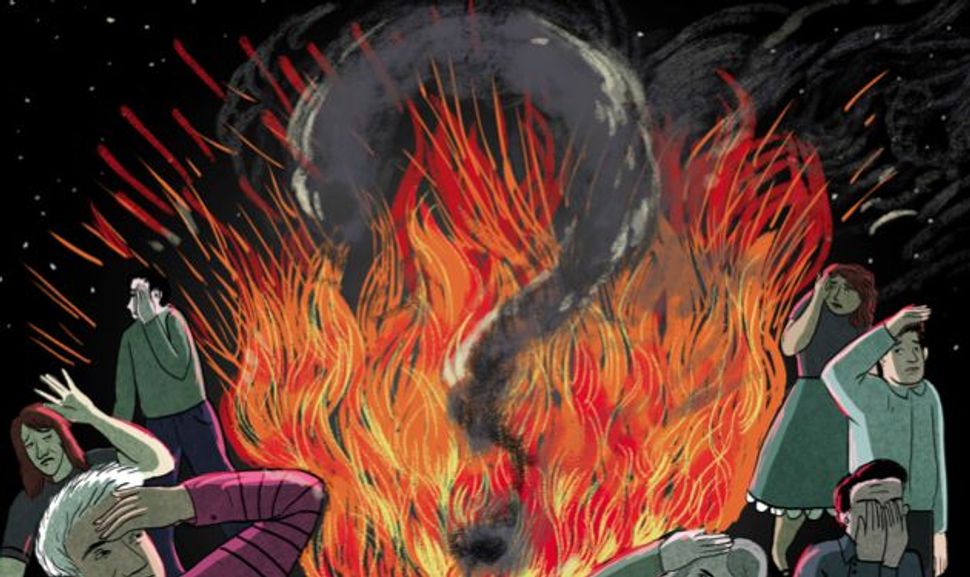 Godology is a monthly conversation between *Forward columnist Elissa Strauss and Rabbi Scott Perlo in which they explore what it means to be “Godish” — to kind of, sort of, believe in God.

SCOTT: Elissa, I think that most people take it as an article of faith that the angry “Old Testament God,” as some people call it — punishing and smiting and meting out justice — is a relic of the past or the province of extremists. For the most part, I agree. God’s greatest expression in our time should be of love, of compassion.

Still, I can’t ignore that when the prophets rail against oppression, they speak of God’s anger: “‘Is not my word like fire?’ declares the Lord, ‘and like a hammer that smashes rock?’” (Jeremiah 23:29)

I love love, Elissa, but is there a place for holy anger in our contemporary world?

ELISSA: Assuming you are not referring to the fire and brimstone variety, I’ll say yes. I have no idea how such anger could be or would be manifested. But on a conceptual and emotional level, I say bring on the anger, if only as a corrective to the warm and fuzzy but entirely flattening idea of God as a source of unconditional love. That’s just boring.

But there’s a problem: The kinds of people who speak about an angry God tend to be of the Westboro Baptist Church variety. I seriously doubt those guys are channeling anything I’d consider holy.

Right. While I, obviously, have little in common with those folks, I wouldn’t want to totally dismiss the way they incorporate anger into their spiritual lives. I think there is something compelling about using our sense of spirituality to search for what is wrong, as well as what is right. What I mean is that we often use those spiritual moments to tap into what is beautiful and good in the world. But why not use it to seek out the darkness too? Because I have a fuzzy sense of belief about God’s existence, that is the closest thing I can conceive of as representing God’s anger. How do you think God’s anger manifests itself?

My knee-jerk response is to say that we encounter God’s anger through the voices of prophets, but I’m not sure that’s right. It’s a cruel irony that people who claim to speak for God are usually doing anything but. Every student of the Talmud knows this: “Since the destruction of the Temple, prophecy has been taken away from the prophets and given to madmen and children.” (Sukkot 39b)

So who then are the prophets of today? How do they spread their message?

I think that God’s anger is heard in the voices of those who suffer — as an accusation to those of us who have conspired to create their suffering. “Even though the gates of prayer are locked shut, the gates of tears have not been locked shut” (Berahot 32b). Not surprisingly, they are precisely the people to whom we don’t listen.

Anyway, what I want to know is why you find the idea of a God who only loves boring? I think I agree, but it’s worth exploring.

Because as much as I believe in love as a guiding principle and purpose for living life, I don’t think it is the guiding principle or purpose. God is love. All you need is love. To me this thinking suggests that love is all there is — the finish line, the reason for existence. I love love as much as the next gal, and yet I still believe there are things we should aspire to beyond it. Justice, self-knowledge and beauty, to name a few, and anger is often part of the experience that brings us to these places. And if God is indeed one, as our tradition believes, then wouldn’t anger be part of that God too?

So how would anger work toward leading us to a higher ideal? How do we avoid its immense potential to do the opposite, and mire us in hate and violence?

It’s about being reflective. If we are only responding to anger, even in its most abstract variety, with defensiveness, well that’s a sign of emotional, intellectual and spiritual laziness. But if we take that sense that something isn’t right, and use it to make change, those feelings serve a great purpose. I’ve had plenty of spiritual moments when I feel not harmony, but a sense of resistance. I can’t say it comes straight from some man upstairs, but I do know that it forces me to examine my own behavior, that a certain self-knowledge can come out of the feeling of rage it inspires.

I agree. There is a reasonable anger that only comes out of profound relationship; it’s a result of expectation. It’s the kind of thing that you have for someone whom you love, for whom you have high hopes. And, especially when we’re talking about parental love, that anger is meant to teach, not to shame. It is not the same as rage, and it has no relationship to hate; it is about deep concern. So yes, you’re right. When someone who cares about me yells at me, it’s worth my time to reflect, and to take them seriously.

In many ways, religious fundamentalists have ruined the idea of God’s anger. This isn’t about God hating us, but instead about God telling us we are headed down the wrong path. Even when the voice sounds obnoxious, nagging, tiring, impolite, when it presents itself as mental illness, or the rudeness of pain, or the smell of desperation that attends poverty, we, I, need that kind of criticism. Otherwise we risk following our deceptive rationalizations about our misconduct to their often undesirable ends.

Grappling With God’s Wrathful Side