Netanyahu’s Speech Just Raised the Stakes for All 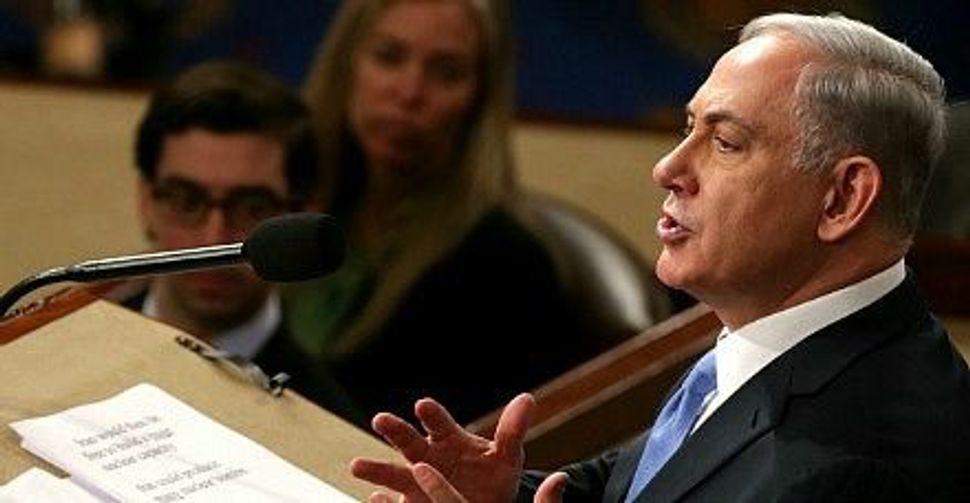 Benjamin Netanyahu dramatically, effectively — and perhaps, dangerously — raised the stakes in his speech to Congress today.

The Israeli prime minister employed his considerable rhetorical skills to command the room, describing Iran in terms designed to frighten and excite, painting a ferocious picture of a nation hell bent on exporting its vicious brand of revolutionary terror and “gobbling up” nations all around its volatile region. And he did a masterful job of critiquing what he said are the current terms of an agreement being negotiated by the United States and other Western powers to curb Iran’s nuclear ambitions, a deal that he claimed would “all but guarantee” that Iran would, sooner or later, become an atomic power with evil intentions.

Netanyahu may have accomplished what his Congressional patron, Republican House Speaker John Boehner, intended: To make it difficult, if not impossible, for lawmakers to approve the deal so ardently sought by President Obama. Netanyahu may well have also accomplished his main political motive in Washington: To secure his own reelection, by delivering a stirring speech laced with Jewish themes and a touch of Hebrew, beamed to prime-time Israel just weeks before it goes to the polls.

But this high stakes gamble also entails its own risks to the prime minister and the nation he wishes to continue to lead, and to the United States.

By so blatantly challenging the Obama administration on its home turf, Netanyahu has further exacerbated the increasing partisanship of foreign policy in general, and of Israel advocacy in particular. Once the glow of umpteen standing ovations has faded — never in my lifetime did I imagine members of Congress applauding Purim! — the speech debacle laid bare a growing schism among American Jews that no 45 minutes of fine words will erase.

And he cemented the perception that stopping Iran is mostly in Israel’s interests. In his litany of Iran’s transgressions — they are many and they are real — Netanyahu did show how the Islamic regime oppresses at home and makes deadly mischief abroad. But that point would have been much more powerful if it had been made by someone other than the prime minister of Israel. By framing this contest as a replay of the Purim story, where a hateful public figure is thwarted in his attempt to kill all the Jews, Netanyahu didn’t talk to an America weary of yet another Middle East war and skeptical of military intervention in that messy region.

That might be okay if his stated alternative to the current negotiations will work. Instead of this “very bad deal,” Netanyahu seemed to argue for continued, strangling sanctions until Iran stopped aggressively trying to control neighboring states, stopped supporting terrorism, and stopped threatening Israel. Who wouldn’t want that? But will more sanctions and more threats achieve those lofty goals? Or will they make Iran more desperate? And if Iran balks and walks away, how then is the West supposed to suppress and monitor its nuclear activities?

At the end of his speech, Netanyahu made a stirring declaration that Israel will stand for itself, no matter what. While he carefully avoided using the term “war,” that’s what he implied — a unilateral military action that all the experts say will do little to stop Iran’s activities and could unleash the very regional violence that he says he is trying to avoid.

I can’t help but admire Netanyahu’s chutzpah. He laid out a compelling reason to fear Iran and a valid critique of the current negotiations. He may well have caused the course of these talks to swerve in his direction. But his alternative better work. If it doesn’t, Israel and by extension the United States may have far more to fear.

Netanyahu’s Speech Just Raised the Stakes for All