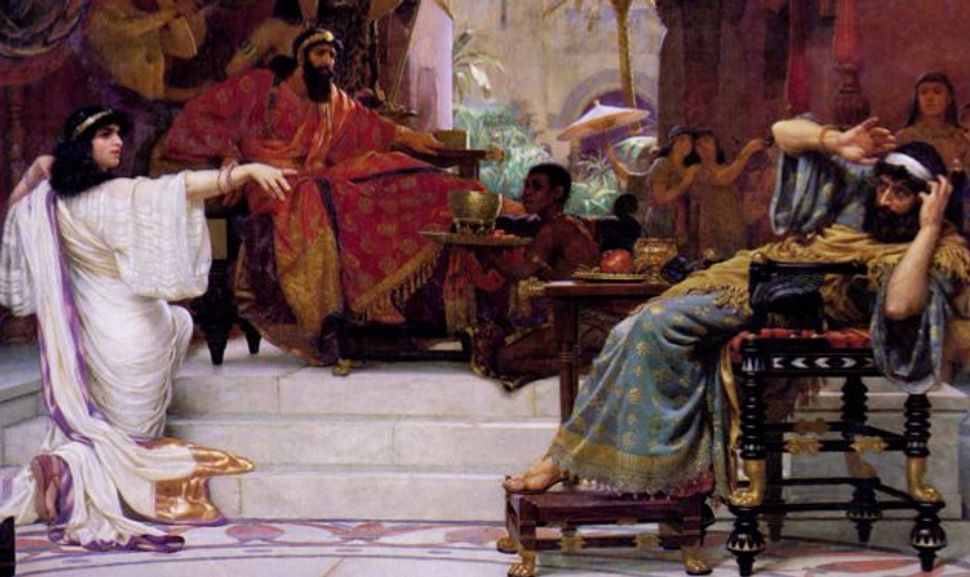 “All our struggles are in vain if the battle against the Jews is not fought to the finish. It is not enough to get the Jews out of Germany. No, they must be destroyed throughout the entire world so that humanity will be free of them.” Thus spake Julius Streicher, whose vile tabloid Der Sturmer was read by millions in wartime Germany, to a Nazi student organization in 1935.

Der Sturmer regularly offered up things like a close-up of the deformed face of a Jewish man above the legend, “The Scum of Humanity: This Jew says that he is a member of God’s chosen people”; a cartoon of a vampire bat with a grotesquely exaggerated nose and Jewish star on its chest; and another of a Jewish butcher snidely dropping a rat into his meat grinder. It propagated the myth that Jews killed German young people for their blood.

Purim approaches. Its narrative concerns an ancient Jew-hater, the Haman whose name we traditionally make noise at when the Megilla, or Book of Esther, is read in synagogue.

The narrative is a virtual parade of ironies: Haman turns up at just the wrong place at just the wrong time, and ends up being tasked with arranging honors for his nemesis Mordechai. All his careful planning ends up upended, and the gallows he prepared for Mordechai become his hanging-place. In the words of the Megilla, v’nahafoch hu, “and it was turned inside out.”

Such “chance” happenings are the hallmark of the defeat of Amalek, the irredeemable and sworn enemy of the Jews and Haman’s ancestor. Amalek, the Torah recounts, “chanced” upon the Jews (“karcha baderech,” literally, “happened upon you on the road”), a phrase that has been stressed in Jewish texts as reflecting that enemy nation’s belief that all is mere chance, and nothing is meaningful. That “chance-iness” is reflected as well in Haman’s “casting of lots,” or purim, from which the holiday takes its name. But chance, the message of Purim teaches, is an illusion; God is in charge. Amalek may fight with iron, but he is defeated with irony.

As was Julius Streicher. Shortly after Germany’s final defeat, an American army major, Henry Plitt, received a tip about a high-ranking Nazi living in an Austrian town. He accosted a short, bearded artist, who he thought might be SS Chief Heinrich Himmler, and asked him his name.

“Joseph Sailer,” came the reply from the man, who was painting a canvas on an easel.

Plitt later recounted: “I don’t know why I said [it, but] I said, ‘And what about Julius Streicher?’”

“Ya, der bin ich,” the man with the paintbrush responded. “Yes, that is me.”

When Major Plitt brought his serendipitous catch to Berchtesgaden, he later recounted, a reporter told him that he had “killed the greatest story of the war.” When he asked how, the reporter responded “Can you imagine if a guy named Cohen or Goldberg or Levy had captured this arch-anti-Semite, what a great story it would be?”

Major Plitt recalled telling the reporter “I’m Jewish” and how “that’s when the microphones came into my face and the cameras started clicking.”

Haman’s riches, according to the Book of Esther, were given to Mordechai. Stars and Stripes in late 1945 reported that Streicher’s considerable possessions (including a pornography collection) were converted to cash and used to create an agricultural training school for Jews intending to settle in Palestine. Iron, once again, no match for irony.

Streicher was hanged at Nuremberg in 1946. There was no evidence that he had ever personally harmed a Jew, but the military tribunal decided that, through his slanderous propaganda, he had indirectly played a part in what would come to be known as the Holocaust, and was thus guilty of war crimes.

Eleven of the captured Nazis were convicted and sentenced to death. One, the foppish Goering, ingested a cyanide capsule he had hidden on his person mere hours before his planned execution.

Ten sons of Haman were hanged in Shushan, the Persian capital. An eleventh child, a daughter, committed suicide earlier, according to the Talmud.

Journalists were present at the Nuremberg hangings. Streicher’s final words, shouted just before the trap sprang open, were: “Purim Feast 1946!” — a rather odd thing to say on an October morning.