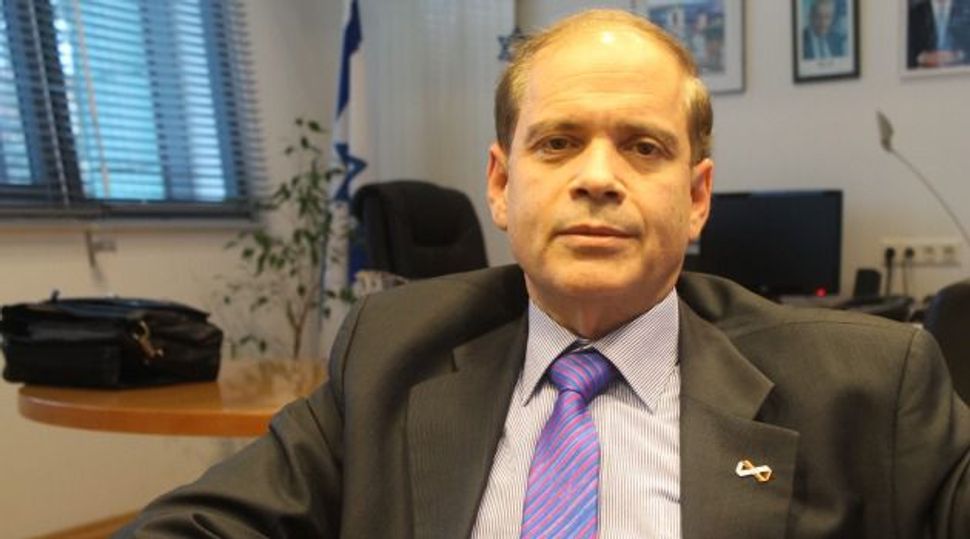 When Yakov Hadas-Handelsman was born in Tel Aviv in 1957 the passports Israel was issuing to its citizens still bore the inscription “Valid to any country except Germany.”

Today, Hadas-Handelsman is the Israeli ambassador to Germany. He devotes much of his time to nourishing and deepening the relationship with the German nation, which has become Israel’s closest ally in Europe.

This year, Israel and Germany are marking five decades of diplomatic relations. To commemorate the anniversary, the foreign ministries in both countries are organizing — and funding — dozens of special events and cooperative projects that will take place in Israel and in Germany throughout 2015. When ambassador Hadas-Handelsman and German President Joachim Gauck launched the anniversary celebrations at the Berlin Embassy, Gauck said the two countries “will work together to ensure that our special, friendly relations continue to deepen.”

But the warm intentions tell only part of the story. Led by Chancellor Angela Merkel, the German government has repeatedly criticized Israel’s policies in the West Bank, and recent public opinion polls in Germany revealed growing criticism of the Israeli government. In a survey conducted by Bertelsmann Stiftung, a not-for- profit research foundation, 41% of respondents agreed either partly or in full that Israel’s policy towards Palestinians today is essentially the same as those of Nazis towards Jews.

The Forward’s Yermi Brenner spoke to Hadas-Handelsman in the Israeli embassy in Berlin to discuss Israel’s relations with Germany in today’s international landscape.

Yermi Brenner: Why is it important for Israel to have the support of the German government and of German people?

Yakov Hadas-Handelsman: Today, Germany is a leading economic superpower and is gaining more weight when it comes to worldwide policy or diplomacy, so [its support] is always essential, especially for a state like Israel. Germany is committed to its special responsibility towards the Jews and towards the State of Israel because of the past. As Chancellor Merkel said seven years ago, when she had a speech in the Knesset: “Israel’s security is part of the German national interest.” But Germany is an ally of Israel not only because of the past. Germany and Israel share a lot when it comes to values, when it comes to the way we analyze the world and especially the situation in the Middle East. We see many things eye to eye, or almost eye to eye. Therefore, it is important for us to continue these relations.

How have the relations between Germany and Israel changed over the past few decades?

The relationship is always evolving, and I think there was a breakthrough in recent years, because more Israelis managed to overcome the past resentments. More and more, Israelis and Germans have found interest in each other, and I am not talking just about the Israelis who come here to Berlin. I am talking about all kind of relations — cultural, scientific, trade. Germany is in third place when it comes to volume of trade with us, after the U.S. and China. We have over 100 twin-city partnership or twin council partnerships between the two countries, which also means people coming, traveling and getting to know each other.

A report by Bertelsmann Stiftung, a German not-for-profit foundation, found that 62% of Germans have a negative opinion of the Israeli government. Do you sense the German mainstream is becoming more critical of Israel’s policies?

Yes, we can say that among the public opinion there is some withdrawal in the attitudes towards Israel. There is a shift in public opinion. It is not necessarily because of Israel; it’s connected to many other things that concern the average German. We are trying to work on this, and change it.

The German political left there are voices opposing the existence of a Jewish national state in the Middle East. Do you fear that such opinions might become more popular in the German society?

Those who have these opinions are really the extreme of the extreme of the extreme. We work to uproot these kinds of ideas. This is a very thin cover for what stands underneath, which is called anti-Semitism. In the past, European anti-Semitism was identified with right-wing conservatism. In the last two decades, this concept has been changing. Today, since it is not politically correct to express anti-Semitism, they express anti-Israel. The proof could be seen in Europe over the last summer. In Germany and especially in France, demonstrations against Israel because of our alleged policy in the fighting over Gaza changed very rapidly into anti-Semitism. Protesters were not only not wanting to differentiate between Jews and Israel, but also were turning immediately to anti-Semitic slogans.

Following the terror attacks in Paris, Prime Minister Benjamin Netanyahu encouraged French Jews to make aliyah. Would you encourage German Jews to do the same?

One of the goals of Israel is to be the national home of the Jewish people. Eighty years ago, when Jews felt threatened, undesired, unwanted or were kicked out, they had nowhere to go. And then we had the Shoah. Today, if somebody does not feel welcome, does not feel secure, all he needs to do is to pack up a suitcase and come to Israel. But it is for them to decide.