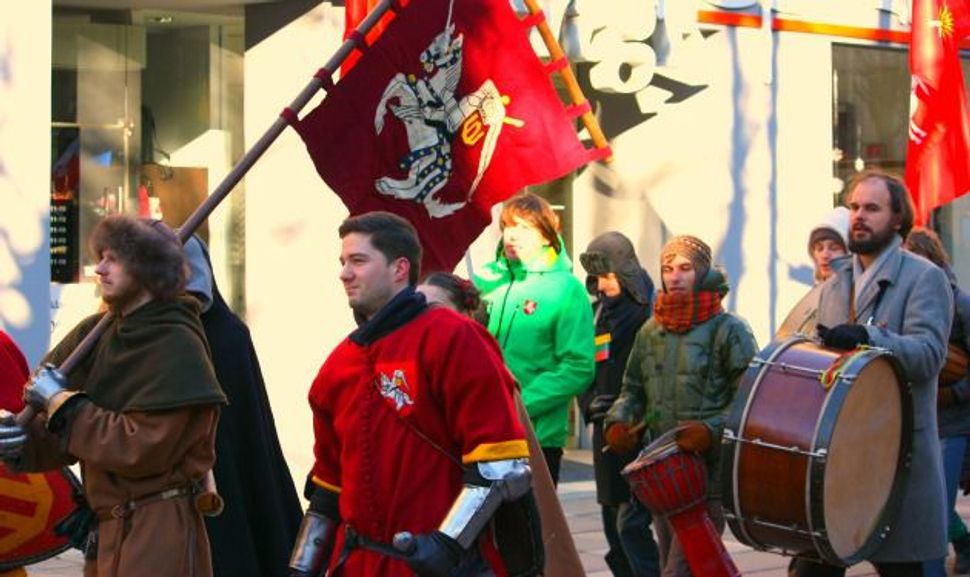 All photos by Daiva Repečkaitė

“Lithuanian fascists march beneath swastikas near execution site of 10,000 Jews.”

When this recent headline appeared in the Jerusalem Post and a few other outlets, it reminded me of the time I’d casually thrown the “fascist” label into an email exchange with classmates. “We can meet in the center after the fascist march is over,” I wrote.

One of the classmates reacted very sensitively. After a series of insults, she wrote, “My family did not suffer in [Soviet forced labor camps in] Siberia for me to have to listen to this. You don’t know any of these marchers, but I do.”

Confused about my young classmate’s emotional defense of such people?

But speaking to a few participants at this year’s Independence Day march in Kaunas (Lithuania’s second-largest city) helped make clear that those who attend these marches don’t typically see themselves as haters.

For many, the “spontaneity” and “youthfulness” of the demos overtake the impulse for critical thinking; unless prompted, they will go without reflecting on the exact slogans — like “Lithuania for Lithuanians!” — of the demonstration.

“I don’t interpret the slogans in a radical way,” explained a young woman who held a child in her arms. “But I agree that too much globalism is not a good thing.” She added that of all the events that take place on Independence Day, she always chooses the nationalist march because her friends go there.

Likewise, two men bearing Ukrainian flags said that they were marching despite feeling uncomfortable with the slogan “No to East and no to West.”

For some, it may be hard to square these sentiments with the hard-to-stomach sight of nationalists marching along with swastika symbols. But here, the swastika’s meaning often gets obscured by loose interpretation.

In 2010, a district court ruled that Baltic swastikas from ancient ornaments were different from Nazi swastikas, and thus exempt from the ban on Nazi symbols. That same year, the Atgimimas weekly uncovered that the Lithuanian Nationalist Youth Union, which applies every year for permissions for nationalist marches in Kaunas, actually received state funding from the Department of Youth Affairs, dedicated to fostering youth NGOs. And in 2013, social-democratic Prime Minister Algirdas Butkevičius said that the only difference between acceptable patriotism and nationalism is whether the famous slogan “Lithuania for Lithuanians” is pronounced “with a smile or with anger.”

The important thing to understand is that Lithuanian nationalism works by translating a multitude of very different voices — soccer fans, hate groups, bloggers, philosophers and others — into a single will. The elites behind the movement don’t have much contact with the youth subcultures that form the bulk of the marches — but they don’t need to. In fact, both groups benefit from the ambiguity of the elites’ statements.

Consider a February 16 demonstration, where several men and women sported medieval clothes as they marched alongside people dressed in basketball fans’ attire or the typical outfit of leather jackets and boots. What could possibly have united all these people?

Anthropologist Tadas Kavolis has claimed that “masculine values” form the core of the skinhead identity. Meanwhile, the Hungarian documentary “Rocking the Nation” shows how folk and rock festivals bring together aggressive skinheads and gentle female neo-pagans. The women do not approve of various anti-Roma or otherwise hateful statements. Still, they form friendships and romantic relationships with nationalist men — and voice more elaborate excuses for them than ultra-nationalists themselves might do.

The political power of hate groups comes exactly from these under-articulated bonds, which help them to mobilize youth and pass as youth organizations. This kind of group glues itself together not by finding enough people to subscribe to a set of statements, but through various informal connections: sports, music, social networks and — of course — dating.

Most of the international coverage that targets Jewish audiences tends to omit this fact, preferring instead to paint the marchers in terms of simple anti-Semitism. Such coverage also omits the Islamophobic and anti-E.U. sentiments of the far-right — even though these are more central to the movement’s identity in Europe than Holocaust denial is.

So next time you see a Lithuanian nationalist march — there’s one scheduled for Vilnius this Wednesday — remember: it’s not as simple as the media makes it seem.

Daiva Repečkaitė is a freelance journalist and anthropologist based in Lithuania. You can find her blog here.