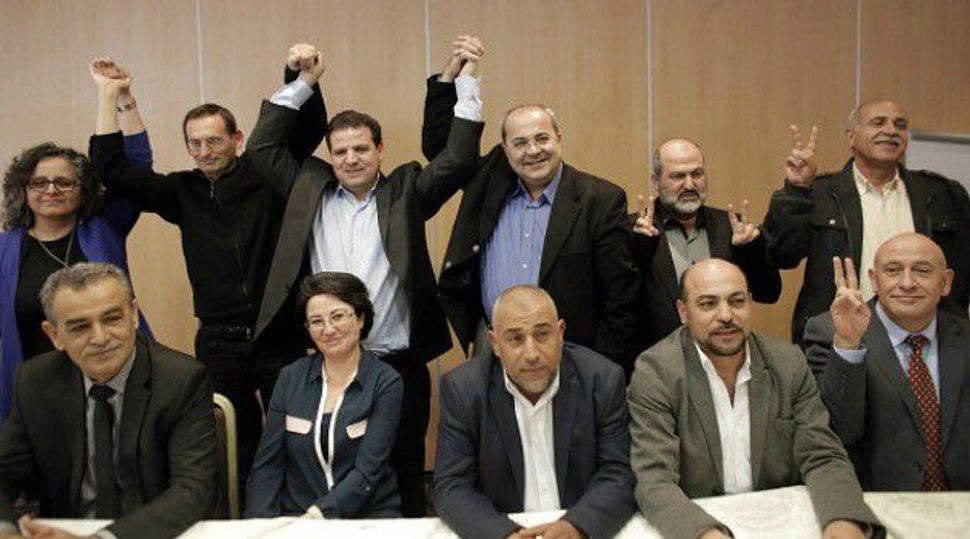 “Bibi, Buji, Zehava and Issawi: All of the Jews are the same,” noted leaders of the Arab Balad party at a recent executive meeting.

Balad Party activists are willing to lump together Netanyahu with Meretz Chairwoman Zehava Gal-On, who supports the Arab Peace Initiative and the division of Jerusalem. Even more offensive is the derision expressed toward Arab MK Issawi Frej of Meretz merely because he joined a Zionist party, despite being left-wing and promoting Palestinian statehood.

The Balad Party’s mentality is representative of a larger problem within the Joint Arab List: the refusal to sit in a coalition led by Labor. Despite the Joint Arab List’s animosity toward Netanyahu and his settlement policy, such actions will only guarantee that Likud will continue to rule Israel during the next term.

Despite relatively promising numbers with Labor leading in many polls, Herzog will have an exceedingly difficult time forming a coalition following the elections. Shas’s Aryeh Deri announced that he will support Netanyahu and Avigdor Lieberman emphasized that he won’t join a leftist government. In the current formulations, it looks nearly impossible for Herzog to build a coalition with such diverse and conflicting partners.

But with the Arab party’s growing popularity — it’s now the third largest Knesset party with 12-13 seats according multiple recent polls — the dynamics could change. If the Arab party were to join Labor, Meretz, Yesh Atid and Kahlon’s Kulanu, the left wing would have the strength to depose Netanyahu and form an alternative coalition.

Unfortunately, the Arab party has repeatedly rejected any future willingness to sit in a coalition led by Labor, with Arab MK Jamal Zahlaka calling the Zionist Union a second-rate Likud.

You could argue that the Arab party, like any other politician, needs to follow their constituency and not get ahead of Arab voters’ wishes. Yet, a February Haaretz poll notes that a large majority of Israeli Arabs, more than 60%, prefer that the Joint Arab List join the governing coalition. And 70% of respondents in the same poll urged the Arab party leaders to focus more on socio-economic issues than on the Israeli-Palestinian conflict. The Joint Arab List’s refusal to sit in Labor’s coalition tramples on their constituents’ wishes for moderation, and ensures that Netanyahu will be the next leader.

The Joint Arab List has also contributed to Netanyahu’s reelection campaign by refusing to sign a surplus voting agreement with Meretz on Friday. Channel 1 reported that associates of Abbas even tried pressuring the Joint Arab List to support such a deal, but the Arab party maintained its rejectionist attitude. The surplus voting deal is designed to ensure that extra votes are not lost within parties of similar ideological backgrounds. The Arab party is unwilling to forge such an agreement with the Zionist party most identified with the Palestinian cause.

Basically, the Joint Arab List’s mentality is that it would be worse for a vote to go toward Meretz than toward more right-wing parties. Instead of trying to ensure that the left-wing bloc is as large as possible to overthrow Netanyahu, the Arab party prefers a weaker Meretz in order to preserve its own rejectionist ideological stance.

The insistence on keeping controversial MK Haneen Zoabi in the Joint Arab List further helps the right wing. As an editor of an Arab-Israeli newspaper told Al-Monitor, “The forced unification with Balad left Hadash with a very bitter taste primarily because of Haneen. The acrimonious and antagonistic atmosphere she is espousing is intolerable.” Zoabi is especially contested due to her insistence that the Palestinians responsible for kidnapping and killing the three Israeli teens are “not terrorists.”

You might assume that if Netanyahu were such a disastrous leader from a Palestinian perspective, Arab political leaders within Israel would do everything in their power to prevent his continued rule. It is especially ironic that in order to remain true to their principles, the Joint Arab List is doing almost everything right now to weaken Herzog’s chances of becoming prime minister and toppling Netanyahu. Some principles.