Israel’s Debates Creep (Back) Into Our Bloodstream 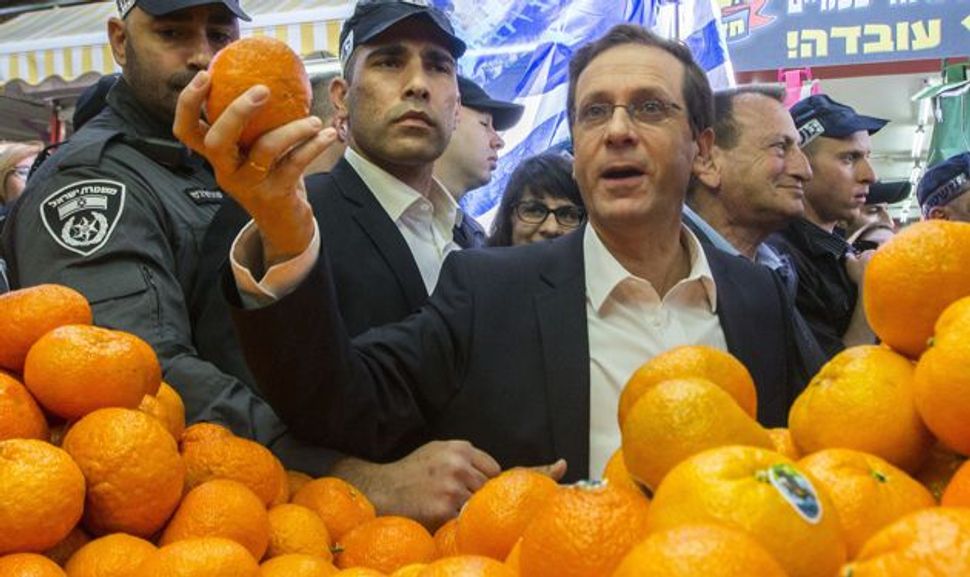 Regardless of how Israelis vote on March 17, it will take weeks of coalition negotiations before we learn what the next government in Jerusalem will look like. Still, it’s not too early to start surveying what we’ve already learned from Israel’s political drama — what it’s taught us about our lives here as American Jews, about our relationships with Israel, with America and with each other.

For starters, let’s note that Israel really is part of our lives. This may sound obvious, but it’s not. Conventional wisdom, backed by whole libraries of research, teaches that American Jews in large numbers have drifted away from Israel in recent decades. Now, suddenly, we can’t escape it. We drift away; Israel chases us to our own shores.

Scholars say this “distancing” from Israel is a natural outgrowth of assimilation, of our weakening ties to Judaism. It follows that it’s not a reaction to anything Israel does. There’s research on that, too. Surveys show greater Jewish traditionalism is strongly associated with greater attachment to Israel. Less synagogue attendance typically means less interest in Israel. That’s just how it is.

Now and then someone claims that distancing is at least partly related to Israel’s actions. Writers like Peter Beinart point to the fact that while most American Jews lean liberal, Israelis for decades have elected mostly conservative governments that behave in ways that please conservatives here and alienate liberals. It would be surprising if Jewish liberals didn’t react by ducking or backing away.

Conservatives counter that the difference between conservatives and liberals regarding Israel isn’t about Israeli behavior but about liberal versus conservative values. Israel, they argue, has little choice in its actions given the type of threats it faces. Even if there is a link between Israeli actions and American Jewish attachment, Israel can’t be expected to modify its security policies to suit the tender sensibilities of American liberals.

Until now there’s been no way of testing the two theories. Israel has done what it believed necessary, regardless of others’ opinions. Liberals in America and Europe have grown increasingly alienated. American Jewish pro-Israel activism has increasingly become a province of political and religious conservatives. Which is cause, which effect? Go know.

Over the past few months, though, we’ve gotten a different view of Israel’s internal debate. The election campaign has made it apparent that a good many Israelis don’t believe their government’s decisions are inevitable or unavoidable. The Israeli debate has finally gotten our attention. It’s pierced our bubble of distanced-out obliviousness and shoved itself in our faces.

When did it hit home? The big bang was when Israel’s prime minister flew into a constitutional crisis he’d stirred up in Washington, challenging the president of the United States from the floor of Congress and claiming to speak for “the entire Jewish people” while the whole world looked on. It was sort of hard not to notice.

Some of us felt he was indeed speaking for us. Others decidedly didn’t. For many, it was the senior Jewish senator, Dianne Feinstein, who spoke for them when she said the prime minister “doesn’t speak for me on this.”

But the speech was merely the climax of an unease that’s been growing since last summer’s Gaza war. It had begun with the heartbreaking kidnap-murder of three yeshiva students wearing yarmulkes. It ended up killing more than 2,000 Palestinians. Whoever you blamed for all those deaths, it was impossible to remain unaffected. The Jewish state was at the center of a firestorm, and remains there.

Soon enough, events starting creeping closer to home: first the January attacks on Charlie Hebdo and the kosher supermarket in Paris, then on the literary café and synagogue in Copenhagen in February. This wasn’t just about Israel anymore. Muslims were seeking out and killing Jews in other countries. It seemed the war was coming home.

By that point the furor over Netanyahu’s congressional address was in full swing. That forced us to focus on the Israeli election campaign. Most of us don’t usually follow Israel’s elections closely. They’re confusing. They’re generally not much of a contest. They don’t touch our lives here.

This one was different. Netanyahu was fighting for his political life. It turns out there are multiple ways of addressing Israel’s problems. But wait: We’ve been defending Israel for years by insisting it’s only doing what it has to do. Were we fed wrong information? Taking sides in a debate we didn’t know existed? Were we being used?

If we’d paid closer attention, we might have noticed that the Israeli debate has been creeping into the bloodstream of American Jewry for years. Thousands of young people we’d thought had lost interest in Israel were actually deeply engaged in its debates — just not in a way we recognized. They were wrapping themselves in keffiyehs and calling for boycotts of Israel. You can call that a lot of things, but it’s not apathy. They may not love Israel in any recognizable sense, but they certainly care about it.

At the opposite extreme from the Jews who cherish Israel too little are those who love it too much. They’re the folks who picket against JCCs, film festivals and parades — and now the UJA-Federation — because they include people and ideas these folks don’t like. Most of us have the good sense to ignore them, but sometimes their message sticks in the back of our minds. The next thing you know, we’re seeing enemies everywhere and turning on our friends. It’s a short step from paranoia into madness.

We’ve grown accustomed to seeing these errant voices as somehow unconnected to us. We see our Jewish identity as something private, personal. T’ain’t nobody’s business but my own. Nobody speaks for me, and I’m not responsible for someone else’s actions.

If the prime minister’s visit taught us anything, it’s that our atomized, personalized version of Jewish identity won’t work anymore. The success of Zionism is that the Jews have stepped back onto the stage of history. We are capable of doing great things together, but also terrible things. Being a functioning community means that each of us is responsible for what all of us do together. Closing our eyes doesn’t make history go away. What we do matters.

If Israel has options and choices, it’s our responsibility to know that. If an Israeli prime minister stands before the world and declares in the name of the “entire Jewish people” that he intends to derail a global effort at nuclear disarmament, each of us has a decision to make. We are responsible for one another.

Israel’s Debates Creep (Back) Into Our Bloodstream