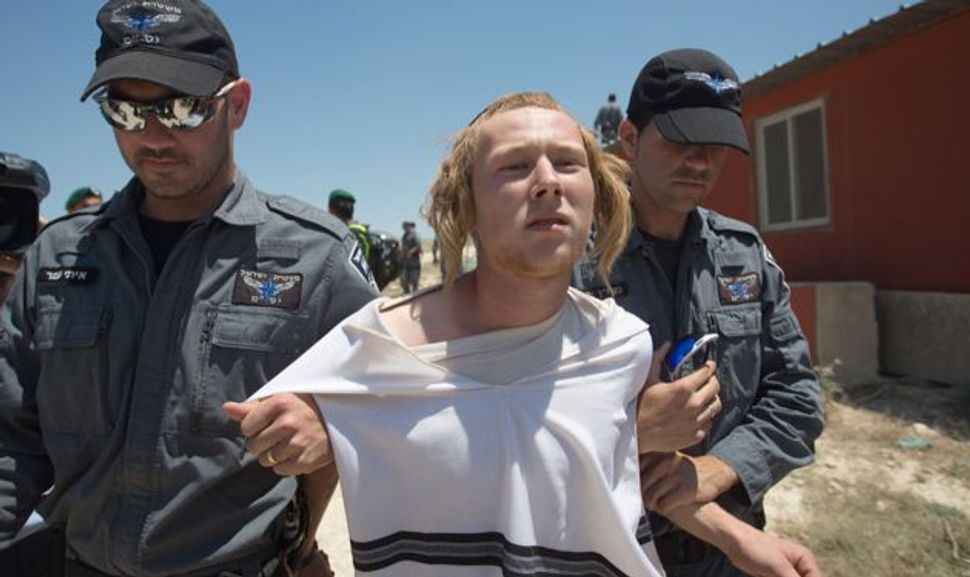 Settlers: What would an evacuation look like? Image by Getty Images

A few days before the general elections in Israel, more than a few of my liberal friends are dispirited. Some of them have become embittered. Even if there is a good chance that this time a center-left bloc can beat Benjamin Netanyahu’s Likud party, these hopeless Israelis argue, nevertheless, that the main reason for replacing the current rulers is already irrelevant: Practically, the annexation of the occupied territories is a fait accompli.

The question, therefore, is not whether a center-left Israeli government will give up the territories, my friends claim, but whether it is able to do so. In other words, have the concrete facts that the governments of Israel and the settlers have planted in the occupied territories sprouted such deep roots that eradicating them is no longer possible?

Indeed, the notion that the West Bank is inseparable from the State of Israel has its supporters among not only the right-wingers and the settlers, but also among those on the left who have begun to think in terms of a one-state solution. It is perhaps the most critical political question: Has the number of settlers crossed the critical threshold, beyond which the idea of removing them becomes impossible?

The first Israeli thinker who developed the hypothesis that separation between Israelis and Palestinians is practically unattainable was Meron Benvenisti, who in the 1970s served as deputy to the mayor of Jerusalem, Teddy Kollek. Benvenisti is familiar with the Arabs and proficient with the history of the conflict. Sometime in the late 1980s, his hypothesis assumes, the settlers had succeeded in establishing a physical infrastructure that actualized the de facto annexation of the territories to the State of Israel. Since then, Israel’s ruling instruments in the West Bank have been perfected to such a degree that the distinction between Israel proper and the occupied territories.

Yet, a contemporary expert with the most current demographic data, a retired colonel named Shaul Arieli, is trying lately to convince desperate liberals that this fear of a de facto annexation is premature. In the ’90s, during the period in which significant negotiations were conducted between Israel and the Palestinian Authority, Arieli was a main adviser on borders and demographic issues for prime ministers Yitzhak Rabin and Ehud Barak. And later, since his retirement from the army, he has become one of the main forces behind the Geneva Initiative for achieving an Israeli-Palestinian permanent agreement.

Arieli’s analysis separates the debate about the so-called settlement blocs from the discussion about the rest of the West Bank. The settlement blocs comprise about 6% of the West Bank’s territory. They are adjacent to the Green Line (Israel’s pre-June 1967 border lines) and mostly lie between that line and the separation barrier. Among Israelis, the conventional wisdom has always been that in a permanent agreement the Jewish state will keep the blocs in exchange for equal land swaps, while the rest of the occupied territories would be evacuated for the sake of the establishment of a Palestinian independent state.

During the past five years, Arieli says, 69,000 additional Jews were settled in the territories, 75% of them (52,000) inside the blocs. Only 25% of the new settlers (around 17,000) chose to live in isolated settlements, which are located outside the blocs. The meaning of the current Jewish demographic distribution in the territories is significant: Despite the settlers’ tremendous effort to fill the entire West Bank with settlements in order to prevent any possibility of an Israeli evacuation, in reality nearly 95% of the West Bank’s territory is still almost entirely dominated by Palestinians.

Palestinians are the vast majority of the inhabitants, and they own the vast majority of land. Arieli’s demographic analysis shows that 75% to 80% of the entire West Bank’s settlers will remain under Israeli sovereignty within the blocs. The other 20% to 25% of the settlers, who dwell today outside the blocs, would be removed and relocated inside Israel. The number of the out-of-the-blocs settlers is around 83,000 — exactly 1% of the entire present Israeli population (8.3 million at the beginning of 2015).

Lately I have been trying to convince my desperate friends that Arieli’s numbers are precise. He succeeded in reducing the most acute political difficulty of Israel into a 1% configuration. Here is the critical question that Arieli presents: Would the other 99% of Israelis agree to be captive to the interests of the 1%? Would they give up their Zionist dream for the ideology of that 1%?

Michael Karpin is an Israeli journalist and the author of, most recently, “Imperfect Compromise: A New Consensus Among Israelis and Palestinians” (Potomac Books, 2013).