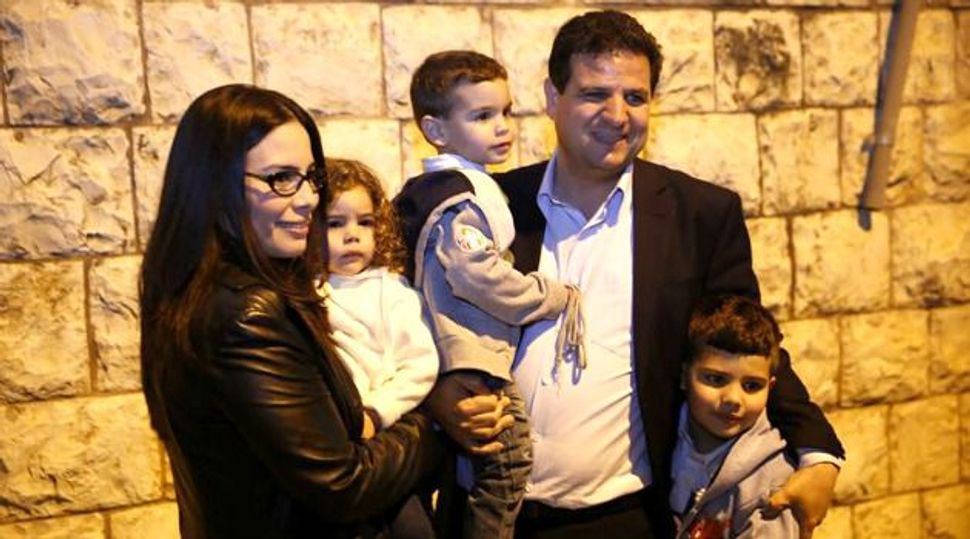 According to an Arab friend who lives in the Middle East, the most exciting Arab leader is an Israeli. His name is Ayman Oudeh. He is a 40-year-old Muslim attorney from Haifa with a wife and three kids. The newly-formed political party he heads — the Joint List — is currently polling third, after the Zionist Union and Likud.

But in a sense, Oudeh has already won the election.

Elected head of the socialist Arab-Jewish party Hadash a few months ago, Oudeh brought together four different parties representing secular Palestinian nationalists, Jewish socialists, Baathists and Islamists to form a single party with a platform that advocates for civil rights and democracy. The unification of these disparate parties with platforms that are often seriously at odds came as the result of legislation passed last year that raises the electoral threshold from 2% to 3.25%, or at least four seats. Ironically, it was pushed through by Avigdor Liberman and his Yisrael Beiteinu party as a means of pushing out the small Arab parties. Instead, they formed a united front and are now polling as the third-largest party in the Knesset, while Liberman’s party is polling at five seats — perilously close to missing the threshold and becoming a victim of his own legislation.

In a televised debate of all the party leaders (except Herzog and Netanyahu), Oudeh caught the media’s attention with his calm, self-possessed response to Liberman’s populist provocation, which included advising the Haifa-born attorney that he should be speaking in Ramallah or Gaza. “You’re not wanted here,” said Liberman. “I am very wanted in my homeland,” responded the Haifa-born attorney to the immigrant from Moldova. Then Oudeh went on to re-emphasize his party’s universalist, democratic message.

Two days ago at a campaign stop, Oudeh was joined by his attractive wife, Nardine Aseli, who is a physician, and their three round-cheeked children. The photograph (above) posted on the Joint List’s Facebook page shows what looks exactly like an average Israeli Jewish family. It was a brilliant move on the part of the campaign manager.

Oudeh has attracted the attention of Jewish leftists with his inclusive, universalist message. One campaign clip that went viral among Hebrew speakers is a case in point.

The video shows a typical Tel Aviv family sitting down for their Shabbat meal, with the parents expressing horror when their 18 year-old daughter announces that she plans to vote for the Joint List. “The ARABS?!” they chorus. At that point strangers start bursting into their home: first someone representing the Likud who hands the father a copy of the pro-Netanyahu Yisrael Hayom (“it’s free”) and asks if the family had heard about the danger posed by Iran. Then a robotic couple representing the Zionist Union comes in, parroting a platform that amounts to “we have no plan, but don’t vote for him because he’s a bad man.” Then a Yair Lapid type comes in like a rock star, shouting, “Hello, Middle Class! Nu, where’s the money? Here, take a mobile phone!” And finally a Naftali Bennett representative comes in, shouting “Dudes! Gut shabbes!” He sits on the table and helps himself to the family’s meal.

The exasperated father orders them all out of his home, at which point Oudeh walks in and gently asks, “Hey, what’s all the noise about?” The other party reps scuttle out of the apartment, muttering about Arabs, while the father and mother thank their “neighbor.” No problem, answers Oudeh. We all live in the same building together and we all want the same thing: “Equal rights, peace and quiet.” In response, the father smiles and says, “Hey, you should run for Knesset!”

In what is perhaps his most important accomplishment to date, Oudeh has succeeded in galvanizing the usually apathetic Arab vote. Tamer Nafer of DAM, which raps about human rights and Palestinian issues, recorded a new video in which he repeats the line, “I’ve never voted in my life — until now…”

If he is proven correct, then the official opposition to the next Israeli government will be headed for the first time in the country’s history by a Muslim Arab Palestinian citizen.