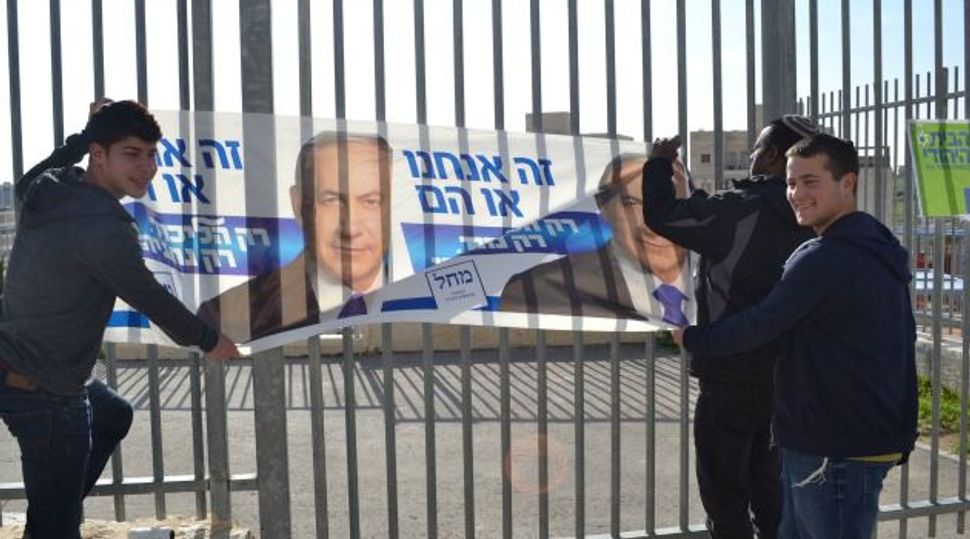 In the West Bank settlement of Har Homa, just outside Jerusalem, many residents said they were voting for Prime Minister Benjamin Netanyahu — some in spite of themselves.

Forty-year-old Ilana Ben Moshe echoed remarks of many when she said she was torn between Netanyahu and other right wing candidates, especially Jewish Home Party leader Naftali Bennett.

“My decision was between Bennett and Netanyahu,” said Ben Moshe, a culture blogger, who went to vote with her husband, a Likud supporter, and four children that morning.

“My husband told me if Bibi won’t be elected, then Bennett will be outside. It’s not that I want Bibi, but Bibi is better than the alternative.”

Har Homa, a hilltop settlement with towering views of the Palestinian West Bank, is a right wing medley. Outside a polling station at the neighborhood’s entrance, volunteers for Avigdor Lieberman’s Yisrael Beitenu party nailed a campaign tent into the ground.

A car with a poster for the Orthodox Yachad splinter party pasted on its hood parked next to a vehicle with Hello Kitty seat covers. Posters for Shas and Likud dotted balconies and street medians.

The Jewish Home Party set up a life sized placard of Bennett with his arm around a curly-haired man with his face cut out. Children placed their faces inside the hole and smiled for pictures.

While some Har Homa voters said that while they felt better represented by smaller parties, many said it was crucial to support Netanyahu to ensure a right wing government as their Prime Minister had slipped in the polls in recent weeks.

“I would prefer to vote Bennett, but he’s losing votes to Kahlon and Yair Lapid,” said Benji Weiss, a 36-year-old information technology analyst. “This election has very little to do with ideas. It’s about left versus right.”

Even Amir Weitmann, a Har Homa resident who is number 39 on the Likud electoral list admitted that the electorate was frustrated with Netanyahu. “To a large extent we have to admit that a large segment are fed up with Netanyahu,” he said. Still, he said, “I think a right wing coalition offers better prospects to have a government.”

Netanyahu visited Har Homa on Monday and declared that he would oppose a Palestinian state if he were reelected, an 11th hour statement meant to appeal to Israel’s far right. He said that he pushed for Har Homa’s construction in the 1990s as a way to break up Palestinian territorial contiguity and separate Bethlehem from Jerusalem.

“Bibi, Bibi, Bibi,” a woman softly chanted as she walked out of the polling station to her car.

Sadeh said he asked a good friend, a political observer, what he predicts will happen in the election. The friend said: “Likud is in a tailspin.”

“But after Netanyahu came to Har Homa and I saw his presence,” said Sadeh, “I said to the same person, ‘It’s not over until it’s over.’”