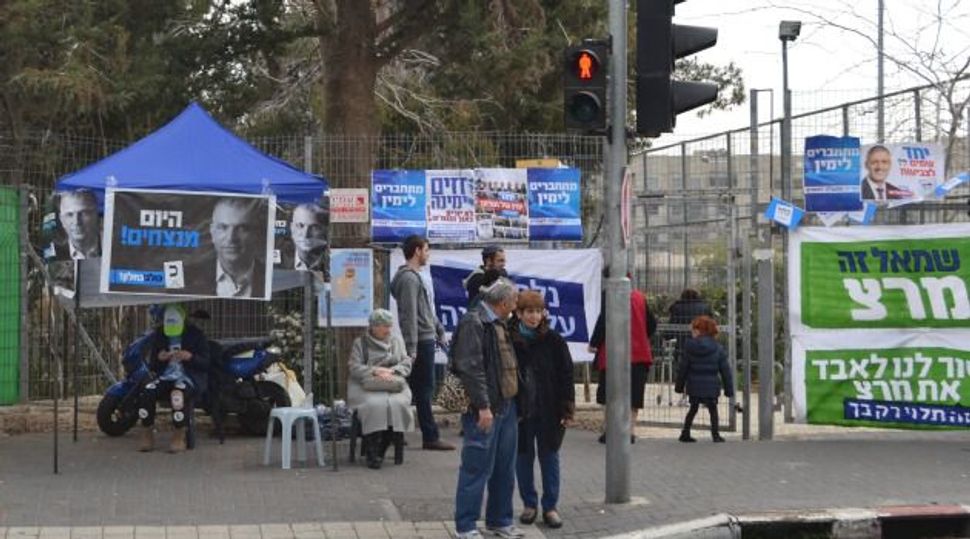 In Beit Hakerem a leafy, historically left-leaning neighborhood in West Jerusalem, Israel’s conflict with the Palestinians and its standing with the United States was driving voters to the ballot box.

Voter after voter said they had hope that a new government would bring peace and prosperity — and end Netanyahu’s grip on power.

“I think it’s very important for our country that there will be peace negotiations. We need two states for two people,” said Nurit, 44, who declined to give her last name because she works for the Israeli government. “Netanyahu is doing a very bad job of guiding our foreign relations with the United States and other countries.”

Standing in the parking lot of a high school polling place, Nurit said that she cast her vote for the Zionist Union. “I believe they can do it better,” she said of negotiations. “I’m not sure, but they have a chance to do it differently.”

Another government worker who declined to give her name for the same reason, also supported Isaac Herzog. In the past, she voted for the centrist Kadima Party.

“I’m sure that something will move with an agreement with the Palestinians,” she said. “I am very hopeful.”

At lunchtime, voters streamed into the high school, across from a Domino’s Pizzeria. The fence outside the school was plastered with posters from parties right to left: Yisrael Beitenu, Likud, Kulanu, Zionist Union, and Meretz.

“Vote for Lieberman!” a young woman in sunglasses screamed through a rolled up poster tube with a photo of Yisrael Beiteinu chief Avigdor Lieberman.

Like many parts of Jerusalem, Beit Hakerem, once a secular bastion of the arts, has grown increasingly ultra-Orthodox in recent years. Secular voters on the street said they were voting to keep the ultra-Orthodox out of the government — with some making surprising choices.

Amir Aharoni, a 35-year-old software engineer for Wikipedia, said that he voted for Likud because the Zionist Union’s Isaac Herzog would need the support of the ultra-Orthodox to form a coalition, and he wants to keep religion out of government. In the past, he voted for far left Meretz.

“The parties are all really awful,” he said. “It was a silly strategic calculation. If I vote Likud it makes it the lowest chance for the Haredi parties will be in.”

Aharoni said he didn’t believe Netanyahu’s statement yesterday that if he were reelected he would never allow a Palestinian state. “I don’t listen to what people say before the elections.”

Anna Ignatov, a 45-year-old high tech programmer, said she voted for Yesh Atid for as similar reason — she believe that party chief Yair Lapid had stood up to the ultra-Orthodox in the Israeli government. “It was hard to choose this time, honestly. I don’t think the parties express my feelings and interests,” she said. “I am tired of the dictate of religion.”