In Jaffa, Israeli Arabs Get Out the Vote 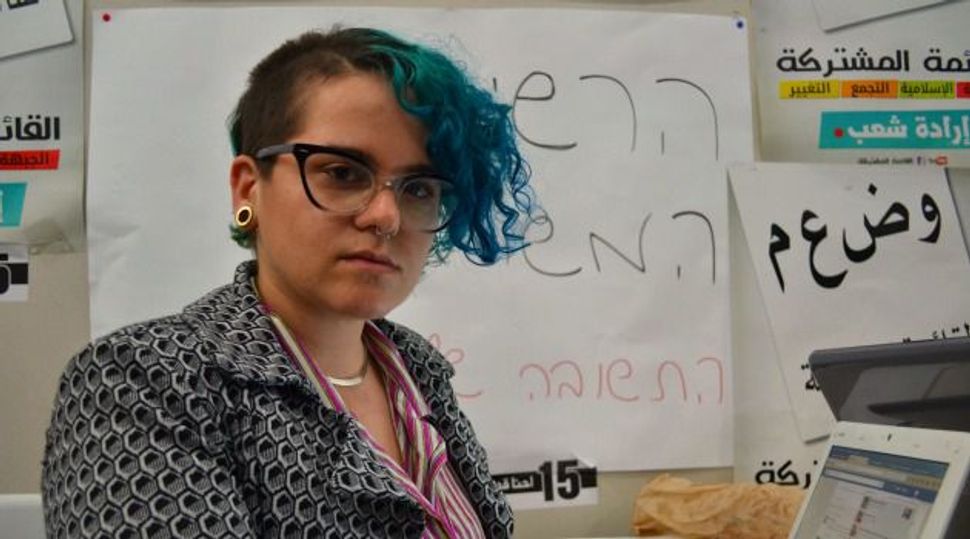 This morning, Wael Mahamid received a mass text message from the Likud party with the warning to its right wing base that Israeli Arabs were going to the polls in record numbers.

But Mahamid only laughed at the message, which was sent out to millions of Israelis. After all, he is working for just that outcome.

“It was very funny,” he said. “This message, it gives us hope. It gives us more motivation to work hard.”

Mahamid, a 43-year-old history teacher, is the manager for the Jaffa headquarters for Joint List, which is made up of four Arab parties in Israel: Hadash, the Jewish-Arab communist party, Ra’am, an Islamist group whose base is in southern Israel; and Ta’al and Balad, two nationalist groups. The four groups joined for the first time this year in order to overcome Israel’s new voter threshold which mandates that parties must garner 3.25 percent of the vote, or about 4 seats, to enter the Knesset. Pollsters predict that the list could get as many as 15 seats for Israeli’s Arab public.

But at around 8:00 pm on election night, with just two hours until the polls closed, Joint List volunteers were concerned about the prospect of low voter turnout among Arab Israelis. At the List’s Jaffa base, in a warehouse across the street from a park, activists checked their cell phones and updated Facebook. A TV blared election updates on a Hebrew station. On the walls were handwritten signs in Arabic and Hebrew: “Peace for two nations.”

Silan Dallal, a Jewish activist with the List, cheered when another volunteer told her that the percentage of voters went up a point, to 57 percent from 56 percent of eligible Arab Israelis. That was still 10 points lower than one prediction, from a study commissioned by the Abraham Fund for coexistence in Israel.

Dallal said that the prime minister himself was to blame. If Arab Israelis thought there were “buses and buses” of people voting, maybe they would feel their vote wasn’t needed after all.

“If the unification doesn’t bring any difference, people are going to be much more devastated and desperate that it didn’t work because they waited for so long for it to happen,” she said.

Another two activists, Rola Agbaria and Itamar Haritan-Reiner, decided to launch an impromptu get-out-the vote effort. Walking on Jaffa’s busy Yefet Street, Agbaria asked a group of mechanics fixing a motorcycle if they had voted.

Elias Ashar, a 25-year-old, said that no, he hadn’t. Why should he? The leaders are taking care of themselves and not him.

“This party scares the fascist right,” Agbaria said. She said that she was planning on boycotting the elections too, but the unification of the parties was a “historic event” and she couldn’t sit it out.

“We Arabs are treated like dogs,” Ashar countered. He said that French immigrants buy property in Jaffa for millions, while he, a local, could barely afford to make ends meet.

“Fifteen seats in the list will change this reality,” said Agbaria.

Finally, Ashar relented and got into Agbaria’s car. She drove him to a nearby polling place as he joked that he would vote for Green Leaf, Israel’s marijuana party. Agbaria and Haritan-Reiner waited as Ashar cast his vote.

He emerged with the white card that proved he had voted for the Joint List. It was his first time voting.

In Jaffa, Israeli Arabs Get Out the Vote