The Value of Shutting Up and Listening 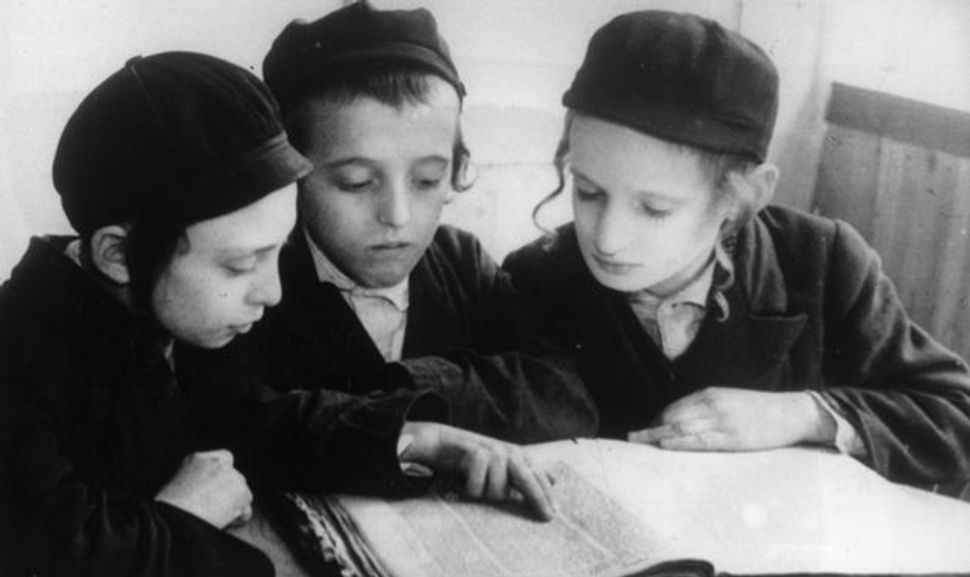 In the Cheder: Debate is good in Judaism, but there is also a place for right answers. Image by Getty Images

In my previous column, I wrote about how a revival in Jewish education, one with a low bar for entry, is essential to maintaining our tradition in a world where the superficial trappings of religion — all dream catchers and menorahs — are replacing deeper meaning and understanding. Creating the infrastructure for this requires an effort from our educators and the people who support them. But that doesn’t mean the rest of us are off the hook.

We noneducators need to re-embrace the idea of guided learning. This might involve seeking out an actual teacher through signing up for a class, or it could be a shift in the way we consume information. Maybe we listen and ask questions when someone tells us a story. Maybe we read not to react, but to observe.

Perhaps most important, maybe we think of learning not as a path to becoming an expert — unless, of course, you are on a specific path of study geared toward that — but instead just a path to more learning. Such a shift would be a radical act today.

An acceptance of a hierarchy of knowledge, where some people actually know better than others, is not a terribly popular concept. The rise of the digital realm, where every contextless fact is just a few clicks away, is not a good friend to intellectual authority. As such, conditions have become ripe for the rapid spread of fauxperts. You know, those people who swear that vaccines cause autism or that death panels are part of Obamacare, and they have proof!

We are living in an age of Ralph Waldo Emerson’s self-reliance gone wild. “To believe your own thought, to believe that what is true for you in your private heart is true for all men — that is genius,” he wrote. But what of the freedom that comes from recognizing that this might not be entirely true?

It’s not that the rise of the fauxperts is all bad. The plurality of ideas that defines our postmodern era has been a boon to those of us who see things a little differently from the traditional gatekeepers of wisdom and correct opinions and want to say something about it.

The question then is how do we balance a plurality of ideas with a hierarchy of ideas?

Through pluralism we make way for new ideas and prevent toxic orthodoxies. Through hierarchies we accept that our ideas are best served by context and that this context can often be found in the wisdom of the past.

This is not a new question. The Jewish intellectual tradition has long wrestled with this tension between a plurality and hierarchy of ideas, and there is perhaps no greater example of this than the Talmud.

In a conversation with Richard Kalmin, a professor of Talmud and rabbinics at the Jewish Theological Seminary, I learned that the Babylonian Talmud is obsessed with hierarchy and that, for those who study the text closely, it is quite clear who is the boss. However, while there is a sense of whose opinions matter most, the text still contains the opinions of the less-esteemed or lower-ranking rabbis. There is also willingness to poke fun at the leaders, as well as at the inclusion of stories where the least learned proves to the wisest or most sincere, and ultimately saves the day.

“It was not supposed to be a source for what is the bottom line,” Kalmin told me over the phone. “The tendency is to make all opinions as reasonable as possible, which is part of its commitment to pluralism.”

Keep in mind that to be included in this plurality at all, one had to study for decades, and this was no online degree. By some accounts, our sages had to study until age 40 for their opinions to count, and this involved following their rabbis everywhere. There’s even a story where a disciple hides under his master’s bed while the latter has sex with his wife. When asked to leave, the disciple explains, “It is part of the Torah, and I need to learn” (Berachot 62).

Kalmin pointed out that in comparison with other religious writings, Jewish texts like the Talmud were unique in their inclusion of diverse views. Why, I asked him, did they include the opinions that they saw as the least correct?

“In case they were useful for future generations,” he explained.

I didn’t have a great Jewish education as a child. Some see this is a tragedy, and in some ways it is. But it also gave me the real gift of being able to approach our intellectual tradition as a student rather than an expert. As an adult I was lucky enough to find a teacher, one who showed me a side of the Jewish intellectual universe that can withstand both hierarchies and pluralities, truths and abstractions, opinions and dissent. How freeing it is to do the opposite of what Emerson suggests and not believe in my own thought but instead seek out the wisdom that lives outside me.

There is a fragility to knowledge. Protecting it requires good judgment and a respect for tradition, both for how we transmit it and the knowledge itself. But these fortifications can’t be impenetrable. Without the fresh air generated by improvisation and dissent, things are bound to go stale, if not decay altogether. So we must carry on in our ancestors’ footsteps and seek out that delicate balance between preservation and innovation. And the first step could be learning, from teachers, about how others have pulled this off before.

Elissa Strauss is a contributing editor at the Forward.

The Value of Shutting Up and Listening