The Anti-Semitism Surge That Isn’t 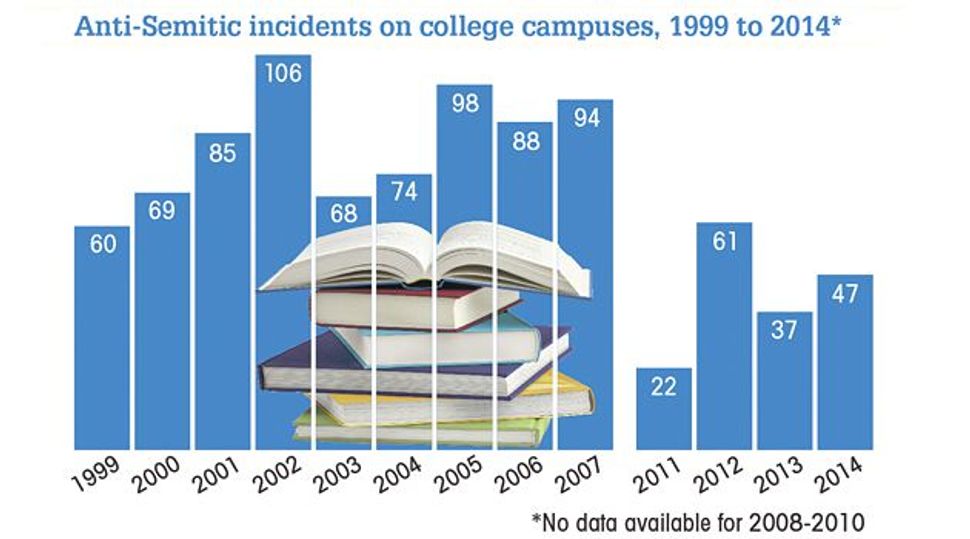 You can see how the perception took hold. Two professors from Trinity College who have been studying American Jewish college students for years included a question about anti-Semitism in their latest survey. The results were startling: 54% percent said that they had experienced or witnessed anti-Semitism on campus during the first six months of the 2013-2014 academic year.

From this, Trinity sent out a press release trumpeting the findings — a “high rate of anti-Semitism” the headline declared. Religion News Services termed it “the new anti-Semitism.” The Connecticut Jewish Ledger said the survey indicated “an alarming trend.”

Then The New York Times weighed in, claiming that “reports of anti-Israeli or anti-Jewish sentiment have been on the rise across the country in recent years, especially directed at younger Jews, researchers said.” Other news outlets echoed this frightful narrative, and you could feel it earn legitimacy, fanned not only by those with a vested interest in scaring us but also because it fed a deeper anxiety. Is the violence against European Jews making its way to our shores? Are extraordinary measures needed to keep Jewish college students safe?

Except the study doesn’t document a trend — it was only a snapshot in time. It wasn’t a representative sample of Jewish college students. It allowed students to define anti-Semitism, leaving the term malleable and open to impression. And while its finding are undeniably disturbing, even one of the authors cautioned against drawing conclusions before more research is completed. “We don’t know if there’s a true trend, or if this is noise,” Ariela Keysar told the Forward.

Here’s what we do know: The Anti-Defamation League, which hardly downplays prejudice against Jews and keeps its own, careful statistics, reports that there is a trend: The number of anti-Semitic incidents on campuses in three of the last four years is actually the lowest it’s been since the ADL started keeping track in 1999.

A deep breath would be a good idea about now.

Keysar and her colleague Barry Kosmin added the question about anti-Semitism after an intriguing finding in the Pew Research Center’s 2013 survey of American Jews: 18-29 year olds were more likely to say anti-Semitism is a “problem” than older generations. What was that about?

Not to sound cliché , but what the two researchers learned next surprised them. They didn’t expect that 54% of the respondents would have encountered anti-Semitism, which appeared to be evenly distributed across geography and religious denomination, afflicting students of varying political outlooks. Those who identified with AIPAC reported a higher number of incidents, but J Streeters weren’t immune, either.

The researchers were especially surprised by the gender discrepancy: Nearly six in ten women said they were victims or witnessed anti-Semitism — for men it was closer to half — mostly from another student. “This presumably means that the anti-Semitism Jewish women face is mainly inter-personal such as rude or disparaging remarks and verbal abuse or is politically motivated,” said the report.

Indeed, all these findings demand further study. They do not, however, warrant hysteria. The sample size was small —1,157 students answered an online survey — and admittedly unrepresentative. (For legal reasons, Jewish students attending public universities in California could not be included, for example.)

And because the researchers themselves didn’t expect this result, they did not prepare follow-up questions. Was the perceived anti-Semitism related to anti-Israel activity on campus? The survey was conducted before last summer’s war in Gaza and of course before the Israeli elections; would the results be different now? And what does it mean that most of these anti-Semitic incidents occurred in the context of individual student interactions — in other words, not physical assaults and harrassment, but hurtful or inappropriate speech?

This last point is essential. The anti-Semitism reported in this survey is largely a social phenomenom. Students told the Trinity researchers that most of what they experienced did not come from professors in the classroom, administration officials or in student council meetings. Most of it was dumb, bad, offensive speech. No excuses here — one bigoted remark is one too many. Just some perspective.

Such hate speech is notoriously difficult to define, monitor and banish on campuses crammed with young, unsupervised adults. One person’s perceived prejudicial remark could be another person’s drunken joke. This is particularly true in our ever-coarser society, where online bullying has reached epidemic proportions and civility seems a lost art. “There’s no derech eretz anymore,” Keysar lamented, referring to the Jewish phrase for civil behavior.

But to say that this marks an increase, a growing trend, a cause for alarm, is premature because we simply don’t know. We do know what the ADL’s data tells us. In its audit of 2014, set to be released April 1 and shared with the Forward, the ADL said there were 47 incidents of anti-Semitism on campuses nationwide, where hundreds of thousands of Jews study. The number organically fluctuates year to year — 37 in 2013, 61 in 2012, 22 in 2011 — but this is one trend that’s unmistakeable. Overall, anti-Semitic incidents are at the lowest point in 15 years.

So what is to be done? Kenneth L. Marcus, who runs the Louis D. Brandeis Center for Human Rights Under the Law, wrote in an introduction to the Trinity survey that these “eye-opening findings should awaken authorities to the need to address campus anti-Semitism much more aggressively, comprehensively, and effectively than they are now doing.”

We’d amend that statement. These findings need further research to be consequential. While appropriately muscular responses from campus authorities are welcome, our hunch is that much of this perceived anti-Semitism fits into a broader pattern of incivility with regards to race, gender and ethnicity, and should be addressed in that context.

Meantime, our own profession, the media, bears responsibility for hyping this out of proportion. Before relinquishing our skepticism, before broadcasting a more frightening narrative, we need to critically examine the facts. Anti-Semitism in higher education should not be minimized; nor should it be exaggerated. Jewish students ought to be smart enough to perceive and confront the difference between institutional bigotry and the damaging statements of their peers.

The Anti-Semitism Surge That Isn’t