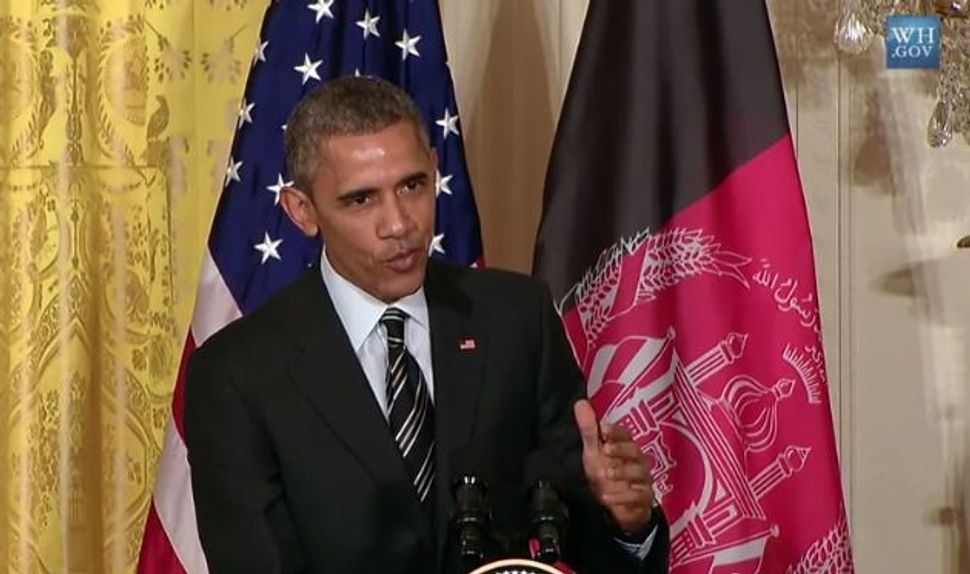 President Obama used his March 24 press conference with Afghan President Ashraf Ghani as an opportunity for a lengthy discussion of his plans to reevaluate America’s approach to Israeli-Palestinian relations.

It runs 10 minutes, from 34:10 to 44:54. He starts off by inviting a question from Associated Press White House reporter Josh Lederman. Below the video is my transcription of the bulk of Obama’s remarks. 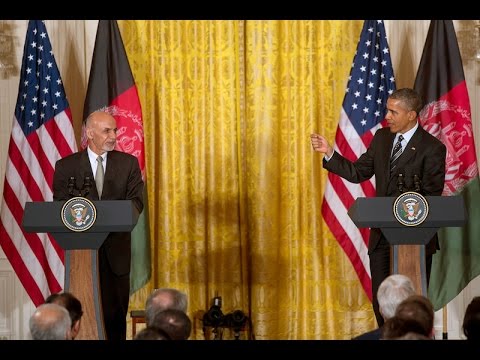 Prime Minister Netanyahu in the run-up to the election stated that a Palestinian state would not occur while he was prime minister, and I took him at his word that that’s what he meant. And I think that a lot of voters inside Israel understood him to be saying that fairly unequivocally.

Afterwards he put forward that he didn’t say “never,” but that there would be a series of conditions in which a Palestinian state could potentially be created. But of course the conditions were such that they would be impossible to meet anytime soon.

So even if you accepted, I think, the corrective of Prime Minister Netanyahu’s in subsequent days, there still does not appear to be a prospect of a meaningful framework established that would lead to a Palestinian state even if there were a whole range of conditions and security requirements that might be phased in over a long period of time, which was always the presumption.

I don’t think anybody ever envisioned in any peace agreement, certainly not one that Prime Minister Netanyahu would agree to, or the Israeli people would agree to, that overnight you would suddenly have a Palestinian state next to Jerusalem and that Israel would not have a whole range of security conditions that had to be met and that it would be phased in over a long period of time.

So the issue has never been do you create a Palestinian state overnight. The question is do you create a process and a framework that gives the Palestinians hope, the possibility that down the road they have a secure state of their own standing side by side with a secure, fully recognized Jewish state of Israel.

And I think it’s not just my estimation — I think it’s hard to envision how that happens based on the Prime Minister’s statements. And so when I said that we have to now do an evaluation of where we are, it’s not in reference to our commitment to Israel’s military edge in the region, Israel’s security, our intelligence cooperation, our military cooperation — that continues unabated. And I will continue to do whatever I need to do to make sure that our friends in Israel are safe. That’s what I’ve done since I’ve been president, and that’s not going to stop. And so the Israeli people need to know that.

But I am required to evaluate honestly now we manage Israeli-Palestinian relations over the next several years. Because up until this point, the premise has been both under Republican and Democratic administrations that as difficult as it was, as challenging as it was, the possibility of two states living side by side in peace and security could marginalize more extreme elements, bring together folks at the center with some common sense and we could resolve what has been a vexing issue and one that is ultimately a threat to Israel as well. And that possibility seems very dim. That may then trigger reactions by Palestinians that may in turn elicit counter-reactions by the Israelis and that could end up leading to a downward spiral in relations that would dangerous for everybody and bad for everybody…

…The evaluation that’s taking place is specific to what happens between Israelis and Palestinians going forward. We’ll continue to engage the Israeli government and the Palestinians and ask them where they’re interested in going and how they see this issue being resolved.

…There’s a tendency I think in the reporting here to frame this somehow as a personal issue between myself and Prime Minister Netanyahu. And I understand why that’s done. Because when you frame it in those terms, the notion is that if we all just get along and everybody cools down, then somehow the problem goes away.

I have a very businesslike relationship with the prime minister. I’ve met with him more than with any other world leader. I talk to him all the time. He is representing his country’s interests the way he thinks he needs to and I’m doing the same.

So the issue is not a matter of relations between leaders. The issue is a very clear, substantive challenge. We believe that two states is the best path forward for Israel’s security, for Palestinian aspirations and for regional stability. That’s our view. And that continues to be our view. And Prime Minister Netanyahu has a different approach.

And so this can’t be reduced to a matter of somehow, let’s all hold hands and sing Kumbaya. This is a matter of how do we get through a real knotty policy difference that has great consequences for both countries and for the region.

We’re gonna do that evaluation — we’re gonna partly wait until the Israeli government is formed.