Next Time Your Jewish Parents Nag You, Try This! 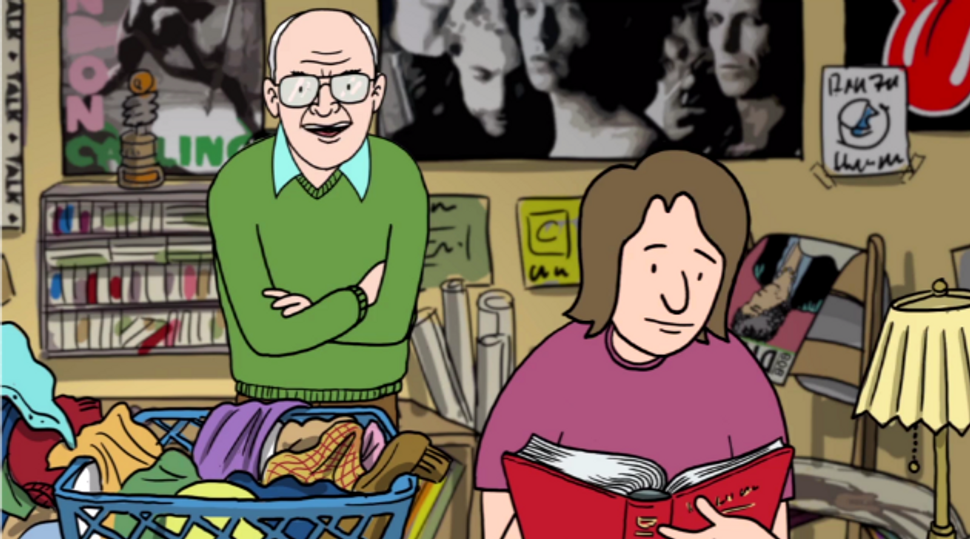 A still from The Brother Mike tapes

You’ve been there. We all have.

Your Jewish parents bust into your room and start their nagging routine: the command (“Clean up this junk!”); the bafflement (“How can anybody live like this?!”); the fake concern (“I’m only saying this because I love you!”); the guilt (“Don’t you know how much I sacrificed so you could have all this junk?”); and the maddening ignorance (“What? What am I saying that’s so wrong? How exactly is this emotional manipulation?”) which all your beautiful, logical arguments are powerless to stop.

Next time your parents bust in to tell you what a shanda your room and/or life is, take inspiration from Mike Cohen. Between the ages of 12 and 28, he covertly pressed Record whenever his parents came to his room to pester him. His friend Rodd Perry took these 16 years’ worth of audio records, animated them and put them online. Now, the whole internet is rejoicing over a Jewish parenting stereotype come to life.

Watch what happened when, for example, Cohen visited home during a 1985 college break.

The Brother Mike Tapes: 1985 from rodd perry on Vimeo.

We’re all used to the stereotype of the Jewish mother as an overbearing nag who’s constantly butting into her kids’ lives, even when they’re no longer kids. This video puts more of a spotlight on the Jewish dad. “I always thought of my dad as a grumpy old Jew,” Cohen tells us in the opening shot. Then, on the tape, we hear him accusing his father: “I don’t trust people, because you taught me not to trust people… You know — ‘Don’t trust anyone who’s not the same religion as you!’ and ‘Lock your doors constantly!’ and — ”

Yep, that sounds about right. Anyone who grew up in an insular Jewish community will hear echoes of their own upbringing in this viral clip. Does it play off Jewish stereotypes? Sure it does. But it implicitly points the finger at the real-life embodiments of those stereotypes, essentially telling parents, “You guys are the shanda, not me!” The parents are caricatures, yes — but they’re caricatures of their own making.

And remember — all Cohen did was hit Record! Genius in its simplicity, no? If an entire generation of young people were to take up this tactic, would that finally, finally, finally bring the parental Jewish nagging routine to a halt?

Next Time Your Jewish Parents Nag You, Try This!