Walking While Jewish in Berlin 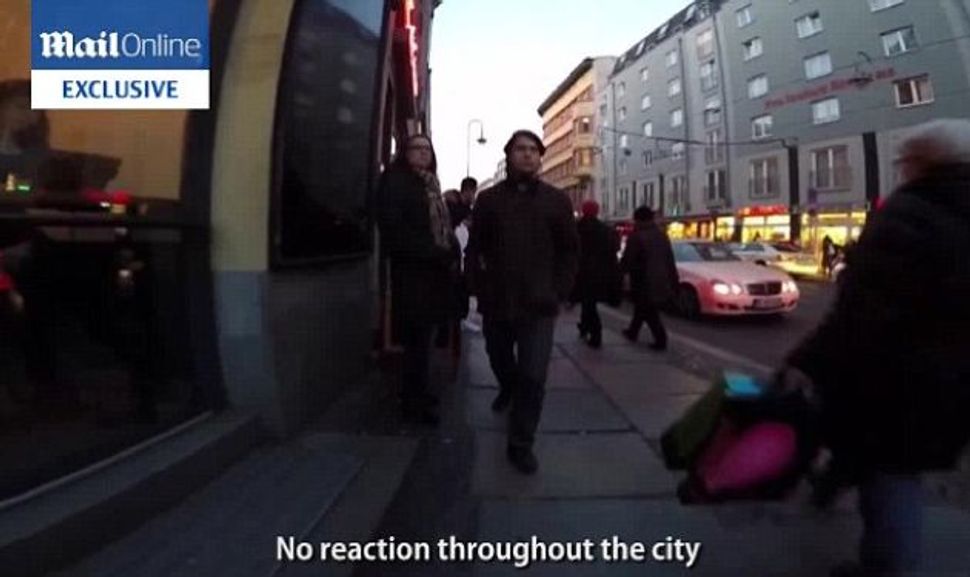 Strolling: Goldmann’s walk through him through the many neighborhoods of Berlin. Image by Daily Mail

In late February, I spent an entire day walking the streets of Berlin, wearing a yarmulke, while a videographer filmed me in secret with a GoPro camera taped to a flap in his rucksack. We were trying to replicate for the British tabloid the Daily Mail the now-famous experiment undertaken in Paris by the Israeli reporter Zvika Klein. During his 10-hour perambulation through the French capital, Klein, wearing a yarmulke and tzitzit, was heckled repeatedly and even spat at.

The uneventful result of my “silent walk” was one of the reliefs of the Daily Mail’s multi-city enlargement of Klein’s idea. In England’s Manchester and Bradford, Denmark’s Copenhagen and in Rome, the yarmulke-wearing subjects faced taunts and verbal abuse. Stockholm and Berlin were the only two cities where these walks were uneventful. Predictably, the Daily Mail wasn’t exactly keen to highlight the staggeringly humdrum results of my day, leading instead with incendiary comments heard on the streets of Britain (for example, “Fight the Jewish scum!”).

Unlike Klein, I do not wear a yarmulke out and about in everyday life. As an American Jew living in Berlin, I have never experienced directly any degree of overt or latent anti-Semitism. On the few occasions that I’ve been outside with a yarmulke on the streets — usually on holidays or the Sabbath — I’ve felt people’s furtive gazes on my head, more curious than threatening. My most memorable time wearing a yarmulke in public was during a late-night U-Bahn ride from a Hanukkah party years ago. Only when two extremely Aryan-looking men wearing lederhosen (a very uncommon sight in Berlin) entered the car did I remember that I still had it on. I noticed them casting occasional glances, so to mentally prepare myself to respond to any questions, I said calmly, “You have your tracht, your traditional costume, and I have mine.”

Even before we started with this experiment, the German videographer — a real East Berlin native — and I had difficulty imagining that the sight of a Jew with a skullcap walking around Berlin would attract much more than mild interest. Still, I was hesitant to venture into the city’s rougher neighborhoods, places like Marzahn and Lichtenberg that have reputations for gang-related violence, poverty and right-wing extremist groups with neo-Nazi ties. I breathed a sigh of relief when we found that no one even batted an eye! Everyone seemed to be too absorbed in his or her own thoughts and whatever he or she was doing. The videographer told me: “Come on. This is Berlin! You could be running around naked and no one would notice!”

I was less concerned about Berlin’s heavily Muslim neighborhoods. In fact, one of our first stops was Neukölln. We began our walk at Hermannplatz, the district’s largest square, and walked through this traditionally immigrant and working-class neighborhood without attracting any unwanted attention from mothers in headscarves pushing strollers, or from bearded men opening their electronic shops. Neukölln is a rapidly changing district. Although it once enjoyed a reputation of being the “Harlem of Germany” because of its crime, low-income levels and non-white-skinned residents, artists and students have invaded it over the past few years. I doubt strongly that the locals would be irked by the presence of a visually identifiable Jew, after the waves of hipsters and expats whose vegan cafes and open-kitchen restaurants have become staples of the neighborhood.

In the part of town known somewhat confusingly as the “Old Jewish Quarter” (it wasn’t a ghetto, just the closest thing Berlin ever had to the Lower East Side), it was easy to blend in with the crowds of native Germans and visitors. Berlin is a city that has dealt extensively and publically with the crimes of the Holocaust. And while I do not doubt that some indigenous Berliners still harbor prejudices against Jews, I find it extremely hard to believe that any of them would make a public display of disapproval.

After many hours of prowling the streets like this, I began to be strangely annoyed at my own invisibility. I positioned myself by a busy subway station in the east-lying borough of Friedrichshain and pretended to wait for someone. Swarms of humanity hurried by me without so much as a glance in my direction. I thought, “What am I, chopped liver?”

The closest I ever got to a confrontation was in front of one of Berlin’s trashiest megamalls, the Alexa near Alexanderplatz. Trying my best to resemble someone waiting purposefully outside the entrance, I was oblivious to the reactions of the mallrats, many of whom turned their heads and even pointed in disbelief. It was as if they couldn’t get over the fact that there was a real, living Jew standing close to them. I felt a bit like a celebrity. But who exactly is at the Alexa at 3 p.m. on a Wednesday afternoon? Ignorant teenagers and clueless tourists — or both — for whom Jews might well enough belong to a species of exotic birds. For the Berliners themselves — and I’m talking here not only about the upper-middle-class folks in Mitte, but also the families in social housing in Marzahn and the Turkish Muslims in Neukölln, — a Jew in a yarmulke, a Jew who looks like a Jew, doesn’t even merit a double-take.

I’m not denying that anti-Jewish sentiment exists here. The protests during the summer over the Israeli-Gaza war proved that it does, in Berlin as well as everywhere. But walking around contemporary Berlin — a city were the annihilation of my people was plotted — wearing a yarmulke, I felt safe, I felt strong and I felt proud. I’d love for Benjamin Netanyahu to come here, spend a peaceful day wandering around this diverse, sprawling and incredible city with or without head covering (knowing him, probably without), and go back to Israel thinking, “Maybe there still is a place for Jews in Europe.”

A.J. Goldmann, a writer and critic based in Berlin, is a frequent contributor to the Forward. He is at work on his first novel.

Walking While Jewish in Berlin