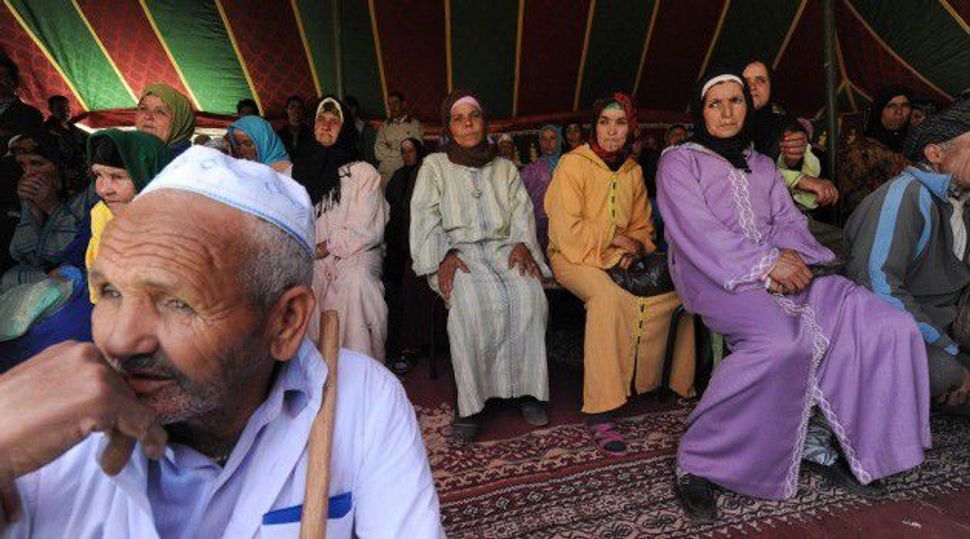 One of the most intellectually stimulating weeks of my life was the one I recently spent in Morocco. More than the architecture or the food, the thing that stimulated me most — and that made me think of Ashkenormativity yet again — was the way many Moroccans spoke of the country’s Jewish community.

I’m always discreet about being Jewish when I travel — whether to Muslim or non-Muslim countries — so here, I tried to be just another traveler who happened to speak fairly proficient French. French is the prestige language in Morocco, and my ability to speak it opened many doors for me to chat with the Moroccans I encountered, be they AirBNB hosts in Rabat and Casablanca, the driver of a “grand-taxi” in Rabat, or the charming family I met at a tea house in Rabat’s Kasbah.

Being a writer, researcher and nosy person, I generally asked simple questions, then listened avidly to their answers. Often, I asked, “What should I know about Morocco?” in order to hear it from the locals themselves.

A number of times, I was told — by everyone from taxi drivers to a high-ranking Moroccan government official — of the country’s immense diversity. “We have Arabic-speakers and Berber-speakers, Muslims and Jews and Christians, secular people and niqab-wearers,” one person told me. A taxi driver originally from the town of Taroudant in Morocco’s south told me that “though the Jews and the French of our town have left, we still miss them.”

Sometimes I would reveal that I’m Jewish — it is my dream, after all, to someday attend one of Morocco’s iconic Jewish pilgrimages, a hiloula. This admission was met with one of three responses: an urging to come back and go to the great hiloula of Ouazarzate; an apology or regret for the treatment and exodus of Moroccan Jews in the 1950s and 1960s; or, most frequently, a narration of the Jewish facilities still available in Morocco today. These stories were occasionally punctuated by mentions of the Jews they had met — locals, French, Israelis — or of the Moroccan-Jewish singer Neta Elkayam.

Nowadays, Morocco has roughly 5,000 Jews, and thousands of Israelis and other Jews of Moroccan descent visit every year. But in the 1950s and 1960s, many Moroccan Jews did face great difficulty, and freedom of Jewish practice was only strengthened in the recent constitution. Morocco’s human rights record leaves much to be desired, and fundamentalists continue to seek (and have harmed) the Kingdom. Yet I was struck by the openness of Moroccans to their Jewish brethren — and to the very idea of their existence.

What struck me most is a celebration of diversity that we often do not see in Europe. We are always told to engage with Germany, with Sweden, and with the Netherlands — “safe countries” that look like secular-Ashkenazi Israel, with “Western” values and tolerance of Jews. Yet I, a survivor of anti-Semitic violence, have never felt so threatened as a Jew than I did when walking the streets of Lund, Southern Sweden’s university city, in January. In one day, I spotted and heard more anti-Semitism — in graffiti and conversations — than I did in a week in Morocco. But somehow we’re still told that Sweden and Denmark are “clean and safe” (like Israel), whereas Morocco is “dangerous and dirty” for Jews. We celebrate the Jews who return to Berlin, city of Hitler, but not those who return to Tunisia or Morocco.

The very idea that Jews could be and are Moroccans seemed so natural to many locals — in fact, I was told by my host in Casablanca that their grandchildren are “100% Moroccan” — even before they knew I was Jewish. (“And I thought you were Catholic!”) Yet in Sweden and the Netherlands and Norway, the very ability of Jews to integrate is again up for debate. We celebrate without full consideration the countries that Ashkenazim enjoy, yet the countries of Mizrahim and Sephardim somehow remain beyond the pale.

So, from Morocco, what I would like to say is this: Tolerance is not the province of Western white people alone. I saw a greater acknowledgment for the intersection of different identities — Moroccan and Jewish, Berber and Muslim, Arab and francophone — than I have ever seen in much of the West.

Yes, Morocco may have safety issues. Yes, the exodus of Morocco’s Jewry looms large. Yes, Morocco’s support (alongside many Jews’ support) for the Palestinian cause leaves some pro-Israel Jews queasy. But Morocco is in the midst of achieving something that many European countries have not yet started: the idea of a Jew as part and parcel of the country’s heritage.