The ‘Stranger’ at Your Passover Seder? That’s Me. 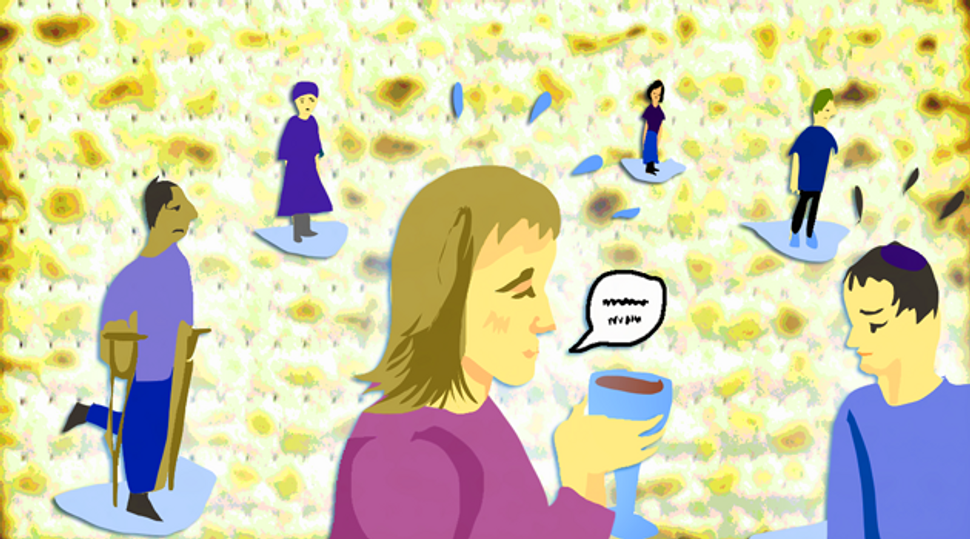 A week before my first Passover Seder, a friend took me to her local Chabad, where the rabbi outlined the ritual for us, from washing our hands to reading the Haggadah to eating the little sandwich. “You’ll do fine,” the rabbi said to me as I was leaving, which confused me because I hadn’t realized I looked nervous.

The night of the Seder, I wore a navy blue dress. I brought a bottle of kosher wine, even though my boyfriend’s family didn’t keep kosher, and a copy of the Sarajevo Haggadah as a gift. Most of the attendees I knew by face, from my boyfriend’s grandmother’s funeral some months prior. As far as our addresses and our clothing and our jobs went, there wasn’t much to distinguish between us, but I knew that underneath all that we were very different. They were Jewish — and therefore belonged here — and I was not.

By this point in my life I had felt like the blond Presbyterian at a bar mitzvah many times over. I had sat in synagogue and listened to rabbis wax poetic about the inherent specialness of the Jewish people. I had been to Sabbath lunches where I perhaps not so subtly grimaced at various containers of brown sludge and fish coated in oil. I had even swayed at the Wailing Wall — mostly to blend in — and watched, brimming with curiosity, as teenage girls nearby sobbed into their Siddurs.

But this was the first time I had been such an active participant in a Jewish ritual — in the home, no less, of the people who might eventually be my family.

The group read aloud: “Still we remember it was we who were slaves, we who were strangers, and therefore we recall these words as well: you shall not oppress a stranger, for you know the feelings of the stranger, having yourselves been strangers in the land of Egypt.”

However adolescent this makes me sound, I must admit that I considered, for a brief moment, that these people were talking about me. At that moment, I felt like I was the stranger in the Haggadah. I didn’t want reprieve from oppression, exactly, but I craved acceptance. Even though I’m not of you, I thought, I hope you can welcome me. Because I am here, and I love you.

Five years later, and three years (give or take) into a conversion process, I no longer feel like a perpetual guest in the home of my in-laws, nor do I stumble through the Seder service, looking to my neighbor to see if I’m on the right page. But I do retain that alien feeling overall, in environments Jewish and Gentile.

At Sabbath services, I’m surrounded by people whose lips flutter effortlessly over the prayers, who know intuitively when to stand up and when to sit, whereas I’m sounding out the Hebrew like a kindergartner, falling ever further behind. At dive bars where I meet friends for drinks, I am the only one whispering a blessing over my mug of beer, and usually my friends aren’t terribly interested in the anxiety I’m dealing with over kashering my kitchen.

I don’t, however, find this constant sense of foreignness depressing; instead, it’s enormously instructive. By being so often the stranger, I am hyper-attuned to the anxieties of those who feel different, whether they’re in foreign lands or out of their depth at work or even just those who have never quite felt at ease in the world because of something restless and inscrutable in their souls.

When we remind ourselves in prayer to love the stranger, I feel that is more often meant to be a plea to the world to remember that the Jews are not suspect by virtue of their differentness. But when I hear it, I’m thinking about all the strangers in my life: the guy who sells me coffee in the morning, the Satmar woman who attends the same synagogue I do, the young man in my neighborhood who uses forearm crutches and politely boards the A train every morning. I’m even thinking about my future spouse, whose heart, though very familiar to me, is not something I could claim to understand all the time.

At some point or another, we are all lonely strangers. And though my first Passover Seder experience may have made me feel “the feelings of the stranger,” it also sensitized me to the pain of any other person — Jewish or Gentile — who feels like they are in a foreign land.

The ‘Stranger’ at Your Passover Seder? That’s Me.