In Indiana, We Have To Choose 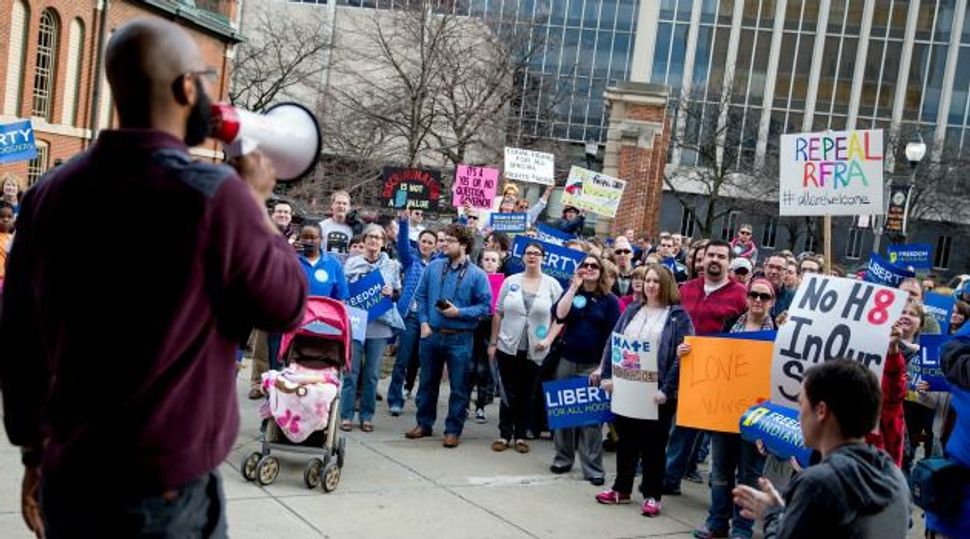 Indiana’s governor, Mike Pence, and the state lawmakers who approved their own version of the Religious Freedom Restoration Act say that they are shocked, shocked, shocked at the uproar, divisiveness and potential economic pain that the new law is bringing to their state. We’d rather they would just be honest and acknowledge that in the great balancing act that is the American public sphere, they want religious freedom to trump civil rights. In our view, it should be the opposite.

Contrary to what its supporters say, a careful review of Indiana Senate Bill 101 shows that it is not just like the 1993 federal law of the same name. Nor is it just like the laws passed by 19 other states.

Nor can Pence’s assertions that the law is not meant to discriminate stand up to scrutiny. (Though at this point it’s difficult to know exactly what Pence believes, since he has flip-flopped and fudged so many times.) If it’s not meant to allow certain people or corporations the right to withhold services to other people with whom they faithfully disagree — that is, to discriminate — why have the law at all?

We can appreciate why people of good intentions would want to break a law if they believed that to follow it would run afoul of their faith. But when doing so harms the public good by limiting another citizen’s access to basic rights — well, then they need to accept the consequences, and not demand instead that government protect their defiance.

It’s worth remembering why Congress passed and President Clinton signed the original RFRA: to allow religious minorities to practice their faith as long as it did not interfere with a “compelling government interest.”

So the Native American who was fired for failing a drug test after ingesting a hallucinogenic drug used for a religious ritual could defend himself. A Muslim man in prison was allowed to keep a short beard even if that violated jailhouse rules. Acts of faith that caused no harm to other people were now legally protected.

But as has been well documented, the RFRA has morphed into a tool for the majority (the mostly Christian majority, that is) to shield them from the expanding rights of minorities and, in particular, those who are able to benefit from marriage equality.

Whereas more than two decades ago, a bipartisan coalition of liberal and conservative faith leaders forged the federal RFRA, now many of the state laws are being pushed by groups that have clear conservative agendas and are worried about the swift legalization of same-sex marriage.

That was true in Indiana, though it took a little digging by journalists to prove the point, since Pence decided to sign the new law in a private ceremony in the statehouse “joined by supportive lawmakers, Franciscan monks and nuns, Orthodox Jews, and some of the state’s most powerful lobbyists on conservative social issues,” according to USA Today.

(The rabbi in the official signing group photo was identified in news reports as Yisrael Gettinger of Congregation B’nai Torah, an Orthodox synagogue in Indianapolis.)

Pence’s protestations to the contrary, this new law is not just an Indiana version of the federal statute; it differs in two key ways. First, as Garrett Epps noted in The Atlantic, the Indiana law explicitly allows any for-profit business to assert a right to “the free exercise of religion.” The federal RFRA law doesn’t contain language extending religious rights to a business, and none of the state versions do, except South Carolina’s.

Second, Indiana included language that essentially allows a business the right to defend itself against a private lawsuit by another person rather than only against actions brought by government. All the other laws (except for Texas’s) do not contain this provision.

In other words, assuming the current law takes effect, businesses in Indiana can use it against civil rights suits brought by individuals.

As Rick Ungar wrote in Forbes, “This is a giant distinction and a distinction that leads the way for businesses — no matter how they may be organized — to discriminate against same-sex couples or any other behavior that the business owner or operator believes offends that owner or operator’s religious beliefs.”

The situation in Indiana is made worse by the fact that the state does not have a law prohibiting discrimination in employment, housing, education and public accommodations on the basis of a person’s sexual orientation or gender identity.

Besides the specific details that make Indiana’s law more objectionable, there is another reason for this uproar. It’s 2015. We are clearly at an inflection point, where gay and lesbian Americans are gaining full rights and protections of citizenship. To activists, there are many more obstacles to overcome, but the pace of change and acceptance has been astonishing.

When the RFRA was enacted, marriage equality was but a distant notion. The federal Defense of Marriage Act was passed in 1996 to forestall any political movement. Now DOMA is relegated to history, and the right to marry exists in 37 states.

Religious objections remain for understandable reasons. There is no denying what the Bible says. “One cannot be more certain of something being inappropriate if it’s called an abomination in the Bible,” Gettinger told the Indianapolis Star last year.. “Those are not my words. Those are the Bible’s words. Those are God’s words.”

So in the end, these two values — the freedom to follow biblical admonitions and the protections offered by civil rights — cannot always be balanced out or reconciled. At times such as these, one is going to have to trump the other if we are, indeed, going to move toward a fairer, more equitable society.

We as a nation have faced this quandary before. After all, slavery was defended through its biblical origins. So was polygamy. In fact, much more than a century ago, a Mormon husband argued that his right to be married to multiple wives was part of his religious duty and should be protected by the First Amendment. In an 1879 court decision, Chief Justice Morrison R. Waite wrote: “Can a man excuse his practices… because of his religious belief? To permit this would be to make the professed doctrines of religious beliefs superior to the law of the land.”

True then. True now. Even in Indiana.

In Indiana, We Have To Choose