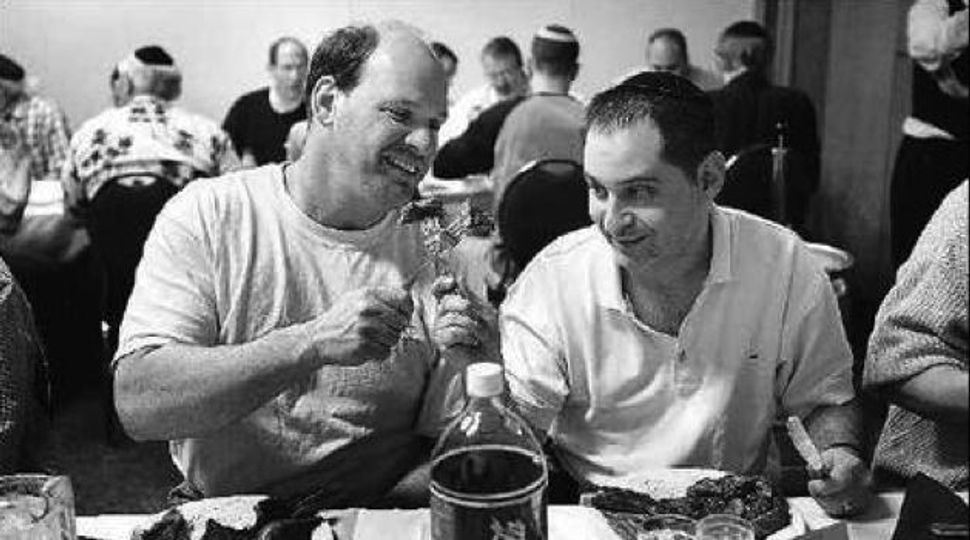 Courtesy of Reuven Spolter // A scene from a ‘man seder’ in Oak Park, Michigan

(JTA) — I’m backing my midlife crisis into a tight space near the synagogue entrance, and because this is my midlife crisis – a 2013 blue Mustang – I’m taking my time. No way anybody’s gonna scratch my crisis.

As a result, traffic is backed up onto Seven Locks Road, but no one honks. We’re all cool, as Zen as Jews can get.

The guy directly facing me in the little red Lexus is smiling, our eyes locked. He’s driving his own midlife crisis, and he’s going to let me take my time because he gets it. We’re all Jewish men of a certain age, 500 of us, gathered here at a synagogue nestled among the broad streets and stately homes of this Washington suburb chockablock with lobbyists, lawyers and physicians.

When we were young, in the World Book encyclopedias sold door to door to our anxious Parents Who Wanted the Best, the entries for these professions were accompanied by illustrative photos of men. That world – the one we once aspired to rule and now mock and revile, the one about to die a second death with the final season of “Mad Men” – is gone. We work and play alongside women.

But not tonight. Tonight, March 22, we are here as men: The Beth Sholom Guys Night Out and Seder Summit.

Such evenings are becoming commonplace. A Wall Street Journal story last week listed similar events this year in Detroit, Atlanta, Houston and Cleveland. These are not quite Passover seders — more like seminars on how to conduct a seder, which you might think by now would be self-evident. Jews have been writing instruction manuals for millennia, and the Passover Haggadah is among the most prominent among them. What’s to learn?

Plenty, it turns out.

“At my seders, I feel under pressure to make sure everyone has a good time,” says Phil Sunshine, a 59-year-old lawyer. “Little kids, you can do puns to break it up. When they grow up, you need to find other motivators.”

What kind of motivators? Rabbi Nissan Antine, the youthful rabbi who initiated the evenings with a congregant, Mark Eidelman, suggests making the evening more adult. Start in the living room with vegetables and dips. A little kiddush wine will relax people and open them up to talking.

Women’s seders have been a feature of the pre-holiday calendar for decades, often highlighting unsung female heroes of the Exodus story or championing feminist innovations — like the addition of a cup for Miriam, the sister of Moses, or an orange on the seder plate to symbolize inclusivity.

The men’s events are aimed more at letting the guys revel in their manhood. There are ribs – succulent, sweet, dropping-off-the-bone beef ribs — and a lot of Scotch, at least a half-dozen stands with different varieties and a range of ages.

Friendly cops man the exits, making sure we’re capable of handling our midlife crises when we’re ready to go back out into that good night. And a small drone circulates overhead taking panoramic shots, the photographer gamely manipulating the device while fielding questions about its technical aspects.

“It’s a change,” says Andy Shorr, a 48-year-old physician who has attended the seder summits since their launch five years ago. “The motif of Scotch and ribs is masculine.” James Blasingame is helping his friend, Neal Sereboff, who is gasping on an especially potent shot of Scotch. Sereboff’s face turns bright cherry red.

“Cask strength,” says Sereboff, a financial services professional who has crossed the Potomac River from Fairfax, Va., once he recovers. “I didn’t know it was cask strength,” he says, emphasis on “cask.”

David Kalender, a rabbi at Olam Tikvah, a synagogue in Fairfax, says the evening provides release by letting men come together in a metropolis fractured by divisions.

“The evening is playful, it’s a coming together for people to play,” he says. “The intensity of D.C. is such that people get caught up in so much.”

Plenty of fathers have brought their sons, and vice versa.

“I got to drag him here,” Sunshine says, nodding proudly at his son, Avi, 26, who works for Baltimore’s Jewish community. “We don’t see him that often.” “I wanted the ribs,” Avi says. “It was an excuse to come down.”

There are glancing, jokey references to the absence of broccoli and other healthful foods. As Eidelman gives away one of the door prizes – the top of a Laphroaig whisky cask – he jokes: “It can go in your man cave or basement or whatever your wife allows.”

Like the actual seder, this night is largely about eating and drinking. It’s also about being kind to others – takeout bags stuffed with ribs are available to bring to absent wives.

But at some point, the absence of women becomes a presence in the room. Why, exactly, do they need to be absent?

“There aren’t a lot of men’s events anymore,” Antine says as he drops by to make sure a reporter is sated. “It’s an opportunity to get together and have community.”

“Men and women are different,” he says. “When women are around, we have to be different.”

The event includes charity components. Funds raised go to providing Passover meals for impoverished Jews, there’s a job exchange for the unemployed and participants are encouraged to bring in lightly used suits for recycling.

“I hope they told their kids when they were leaving tonight why they’re taking the suit – that’s part of the modeling,” Antine says. “Women bond around kids and school. When men bond, it’s not around the most wholesome activities.”

Antine’s presentation is about fathers and sons. After screening a Jon Stewart video comparing Easter and Passover – the former with its basket overflowing with chocolate, the latter with its seder plate prominently featuring the comparatively boring shank bone – Antine agrees with Stewart: Passover isn’t ever going to reach kids through their tummies.

“I have not been to a kiddush where the macaroons were less than five years old,” he tells the crowd, to appreciative nods. Instead, he says, Passover offers a different meaning. “Be the person you want your children to become,” he says.

He offers his own example in the form of a video of his toddler son answering Antine’s off-camera questions. “How much do you love mommy?” Antine asks. Arms open wide. Sister? Arms open wide. Daddy? The boy brings his fingers close in. “This much!”

Antine tells the crowd he has his work cut out for him. There’s laughter – the nervous kind of anxiety and recognition.

Alan Isenberg, 65, a retired pharmacist from Gaithersburg, Md., who brought his son, Adam, 35, whispers to him: “Is that true?”

Adam, checking his phone messages, reflexively shakes his head no, as if he has anticipated the question.

Alan smiles and rubs his son’s back.