Be Careful What You Wish For in Indiana 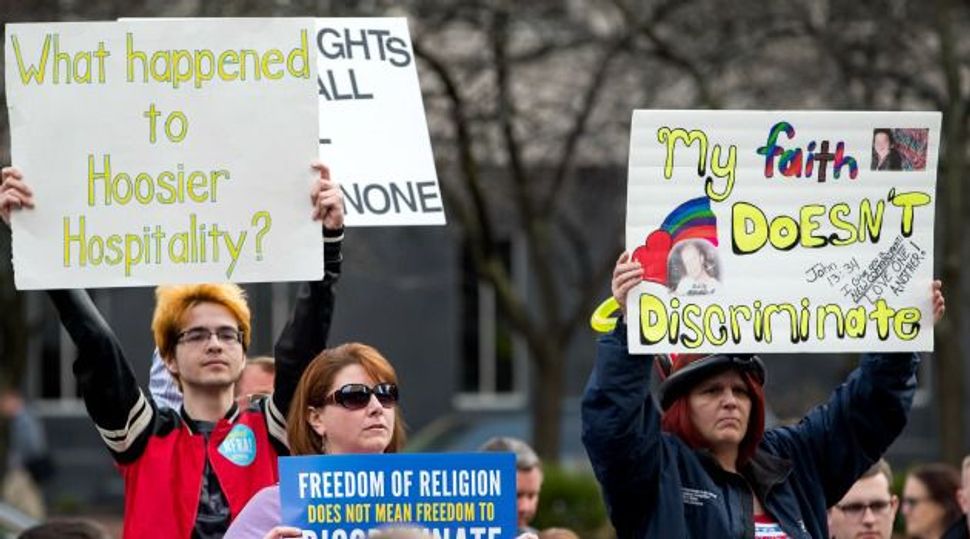 The negative characterization of the bill has dominated the national conversation as a raft of critics — from politicians and athletes to CEO’s and celebrities — blasted the law. Some even refused to do business in the Hoosier state until the law is either repealed or modified.

Indeed, Indiana Governor Mike Pence and the state’s Republican lawmakers were forced to backtrack and insert a “fix” to make clear that the law, in the words of Pence, “is not about discrimination.” And when the Arkansas legislature enacted a similar law only a few days later, Arkansas Governor Asa Hutchinson made clear he would not sign the bill unless lawmakers incorporated a similar “fix.”

While the bill itself does not have any explicit “anti-gay” provisions, backers of the original Indiana bill promoted it as a response to a recent spate of cases in other states where courts have imposed liability under state anti-discrimination laws on various religious service providers — in one case a photographer, in another a florist and in a third, a baker — for refusing to provide their services at same-sex weddings. This is presumably why the bill extended religious liberty protections not only to individuals, but also to any and all corporations and companies.

It goes without saying that it would be shameful for anyone to use the Religious Freedom Restoration Act, or RFRA, to advocate for a wholesale green light for businesses to refuse services to same-sex couples. And to the extent the Indiana religious liberty law is motivated by this kind of prejudice, it deserves the wrath and scorn it has currently received.

What is so bizarre about this narrative from both sides is that Indiana-style RFRA’s would almost certainly not have the effects that its opponents fear and its supporters hope for.

The bill itself is nearly identical to a federal law passed in 1993 which was passed with support from an alliance of groups spanning across the political spectrum as well as analogous statutes in 20 states.

All these laws, including Indiana’s recently enacted version, employ the same basic structure: laws that “substantially burden” religion are invalid, unless those laws can be justified as the “least restrictive means” to achieve a “compelling government interest.” Or, put differently, laws may not significantly impose on religion unless doing so is the only way to achieve a very important objective.

Consider a recent Washington state case addressing a religiously-motivated florist’s refusal to provide flowers at a same-sex wedding. The court held against the florist, finding that her religious motivation could not excuse her failure to sell flower arrangements for a same-sex wedding.

In reaching the decision, the court held that even though the florist sincerely believed that selling the flowers would substantially burden her religious conscience, discrimination on the basis of sexual orientation was a “compelling government interest” — and the only way to protect that interest was by imposing liability for failure to comply with the prevailing laws that prohibited discrimination.

Nothing in Indiana’s RFRA would have changed that decision.

More importantly, as the United States moves closer and closer to marriage equality for same-sex couples, the outcome of cases pitting RFRA against same-sex marriage are likely to follow the same blueprint: court will recognize that selling flowers or cakes or photography for same-sex weddings can impose on the religious conscience of some business owners, but the government interest in protecting against discrimination on the basis of sexual orientation is simply too important to provide exceptions to anti-discrimination laws. For this reason, supporting or criticizing RFRA’s for their impact on same-sex couples builds on misconceptions about what the laws’ likely impact will be.

The problem is that these misconceptions are likely to have some very dangerous consequences. Notwithstanding the current state of the debate over Indiana’s religious liberty law, the core of RFRA has nothing to do with same-sex marriage.

RFRA, both in its federal and state forms, is about protecting minority religions from laws that burden their practices. Indeed, RFRA was passed in response to a 1990 Supreme Court decision, Employment Division v. Smith, which interpreted the First Amendment’s prohibition on restricting the “free exercise” of religion to laws that target religion, as opposed to laws that simply burden religion as an unintentional byproduct. In Smith, the Supreme Court made clear that going forward the only way to get an exception to a law that imposed on your religious practices was to lobby the legislature.

Therefore, if a religious group needed an exemption, for example, from a law prohibiting minors from drinking alcohol so that they could participate in religious ritual (think communion or Kiddush), the First Amendment would no longer help. The only option, explained the Supreme Court, would be to ask the legislature to incorporate an exception into the text of the law.

Of course, asking the legislature for help made sense for larger, more established religious groups. Smaller religions, with less recognition and less voting power, worried that they might not fare as well when asking for exceptions. It was RFRA that could protect minority religions that might not otherwise get a full hearing in the relevant legislature. If a law significantly imposed on a religious practice — regardless of the size and stature of the religious group affected — RFRA required the government to justify the imposition or provide the religious group with an exception.

If as a result of the culture wars, RFRA’s have now become persona non grata, it is minority religions that will feel the brunt of these developments. Think back to San Francisco’s 2011 attempt to ban circumcision. The law did not, by its terms, target religion — it simply banned all circumcision of male minors.

In both of these cases, the laws are drafted in ways to appear neutral and, as a result, there is good reason to believe that neither would violate the First Amendment. In these types of cases, it is RFRA — and not the Constitution — that protects minority religious groups from government regulation. And with current anti-Muslim trends in the United States, the need for such religious liberty laws will become increasingly pressing.

By refusing to pass these laws on account of exaggerated fears of discrimination, we may end up hurting religious minorities, the people who need these religious freedom laws the most. And in this way, the rhetoric of the culture wars matter more than ever. If we cannot turn down the rhetoric it will be the most vulnerable among us who will inevitably be caught in the crossfire.

Michael A. Helfand is an associate professor at Pepperdine University School of Law and associate director of the Diane and Guilford Glazer Institute.

Be Careful What You Wish For in Indiana