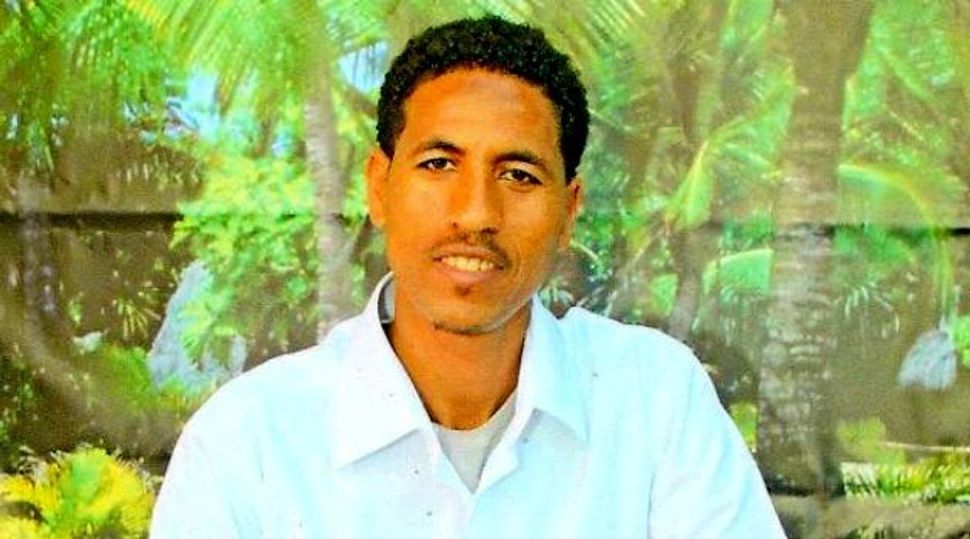 Tekle journeyed half a year by foot across the Sinai from Eritrea to Israel. He traveled mainly at night, for fear of getting caught during the day. “It was a matter of life and death,” he told me when I asked him to recount his escape. Without a civilian judiciary or democratic elections, the Eritrean regime mandates indefinite national service in the form of hard labor — paving roads, mining, or agricultural work. Those who flee are considered traitors and risk torture or death by the government. After graduating college, Tekle left his family and escaped alone. Each month, over 1,000 Eritrean soldiers do the same.

Tekle is one of 47,000 asylum-seekers now living in Israel, 73% of whom are from Eritrea and 19% from Sudan. Many live in the impoverished neighborhoods of south Tel Aviv, but around 1,700 have been detained, without a trial, at the Holot Residency Center.

Last spring, I tutored Tekle in English at the African Refugee Development Center (ARDC), nestled in a corner of Tel Aviv’s Central Bus Station. He chose to write his first essay in English about Einstein’s theory of relativity. As a major in library science, Tekle values knowledge and education above all else, but his university degree means little in Israel. He’s lived there now over three years, but never intended to settle there. He works job to job — cleaning the park or bussing in cafes — to save money for his eventual move to Europe, where he wants to pursue graduate studies in applied mathematics. “It is a dream I am working very hard to realize,” he told me.

The author with Yusi, one of the girls she volunteered with / Courtesy of Madison Margolin

I had no particular agenda when I moved to Tel Aviv for five months last year. My choice had little to do with Judaism or Zionism, and more to do with the post-college dizziness of not knowing what else to do. I lived in south Tel Aviv, a short walk away from the Central Bus Station. Outside that cement monolith, a homeless woman always sat picking a scab on her leg, and inside was chaos set to the soundtrack of trance blasting from boom boxes for sale. Flies hovered over green-olive pizza, merchants hustled to sell mobile phone SIM cards, and the variety of languages spoken there — Hebrew, Arabic, Tagalog, Russian, Tigrinya — reminded me that Israel’s population comes from diverse origins.

That reminder, and my experience tutoring Tekle, evokes Israel’s foundation on the ideal of welcoming the stranger and embracing the refugee, for as Jews, we “were all once strangers in the land of Egypt.”

Passover reminds the Jewish people of our history as strangers in a foreign land, and as struggling newcomers to the Holy Land. The Jewish narrative parallels the narrative of the African refugee population: escaping forced labor, trekking through the Sinai, and finding refuge in Israel.

But the Israeli government often describes the African refugees as “infiltrators” coming to Israel to work instead of to escape danger or persecution in their home countries. Now, the government is planning to deport some of the African refugees to a third country in Africa, possibly Rwanda or Uganda, without consent. Israel and Rwanda are reportedly discussing a deal in which the East African nation would take in hundreds of refugees in exchange for favorable contracts that include millions of dollars in grants.

Already, 1,500 from the Holot detention center have been sent back, after signing forms that declared their departure voluntary. Refusing deportation could mean indefinite residency at the Saharonim Prison in southern Israel.

“You know how we are treated here,” Tekle told me, “[the deportation issue] is like making business on our fate.” He said he hasn’t been in Israel long enough to face deportation from Holot, but every time there’s “bad news” from the government, “the media makes me think and worry about my future.”

While I didn’t go to Tel Aviv to feel more religious, I realize now at Passover that empathy for the stranger is central to the Jewish experience. This year, it felt as meaningful to write about Tekle as it did to attend a Seder. “Information is power,” said Tekle, thankful to still be safe in Tel Aviv and happy to share his story.